George Simenon’s ‘The Blue Room’. I often think it is quite surprising how French (and other) writers are stylistically worlds apart from British authors. Same with films of course. It was a real pleasure to read this short but very satisfying novel so quickly. Just recovering from a hernia operation I hadn’t much else to do….I certainly couldn’t walk anywhere. French authors seem much more capable of getting right inside a character so that you almost become the character yourself and feel what they feel. In this case an adulterer on trial for a murder he did not commit as a result of what the French call ‘une grande passion’  or an intense relationship and affair. The ingredients of the novel were straightforward – a small French village where everyone knows everyone, an illicit affair, an interrogation. The result – something extraordinarily powerful. This book is in translation although you certainly would not know it, and who is to say how good the translation is. But the writing is top quality and expressed with economy. Having said all  this I am glad that I have just, by accident, seen on-line the following comments on Simenon by John Banville………

‘He has a Nabokovian ability to convey in words the tactility of things, although the words that he employs and the sentences he makes of them are always humble and plain. He prided himself on his modest vocabulary and the spareness of his language; having finished a book – which he would do in the space of 10 days or so – he would emerge from his study shaking the finished manuscript by the spine, in order, as he joked, to get rid of the last remaining adjectives.’

Wonderful! ( I don’t think he used a single exclamation mark either).

bookshops), and there are quite a few novels which we perhaps haven’t read or have forgotten reading. One such was Nicci French’s ‘The Red Room’. Totally coincidence that I chose The Red Room immediately after The Blue Room! In fact fool that I am I have only just noticed……..Anyhow what an unexpectedly great read this was. In a somewhat different way to Simenon, French also got right inside the head of our protagonist, a female psychologist helping to solve a series of murders whilst trying to get a grip on her own private life. The scenario and plot were utterly believable and all the characters well drawn. A really gripping Crime novel of the first order.

‘How Many Socks Make A Pair?’  is what’s called a book about surprisingly interesting everyday maths. It does fulfil its function. However, Rob Eastaway sometimes explains the maths and sometimes doesn’t – with his ‘you get the idea of this, but I won’t go into it in detail as the maths is a bit complicated’. I found this frustrating as sometimes you get the impression that he is just serving you up one puzzle or conundrum after another. Still, enjoyable on the whole……..

Always nice to have a family get-together and this one to celebrate two birthdays Katherine and David. It was good that Aiisha could explore our new play park in the village which seemed to go down well….

and from there an easy transfer to the Amusement Centre in Looe with more rides and the opportunity taken to win two unicorns.

The beach was good too with Aiisha dressed for the weather and David apparently fearful..

A Birthday cake at home was well received.

Next day, a Sunday, we were off to Falmouth for a proper Birthday meal. We parked by Kimberley Gardens with its even better play park……..

which even pleased some of the adults…… 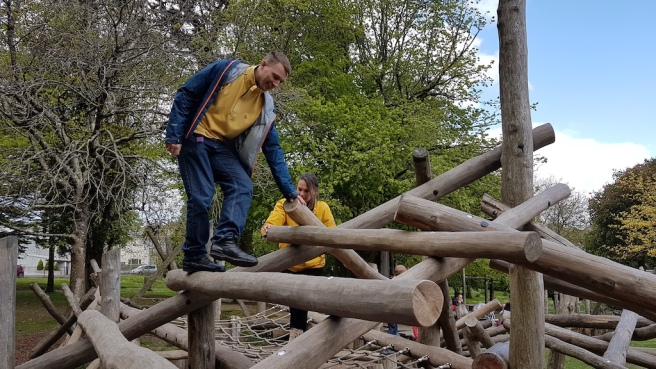 A nice place to live here with its Edwardian houses….

Very big fish in the pond too… 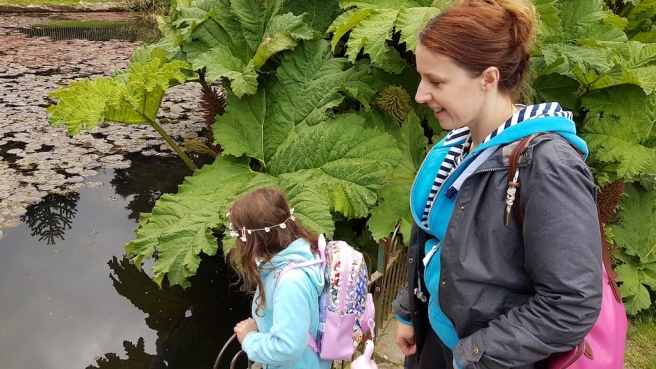 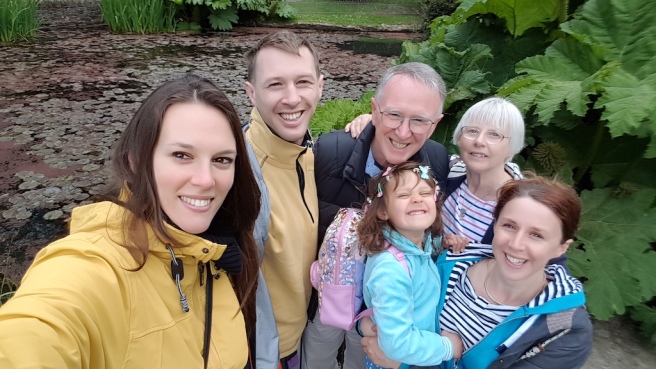 Our meal was at the Star and Garter winner of Best Foodie Pub in the South West by Food Magazine. Great views.

Post lunch some light exercise on Gyllngvase beach. A nice day all round. 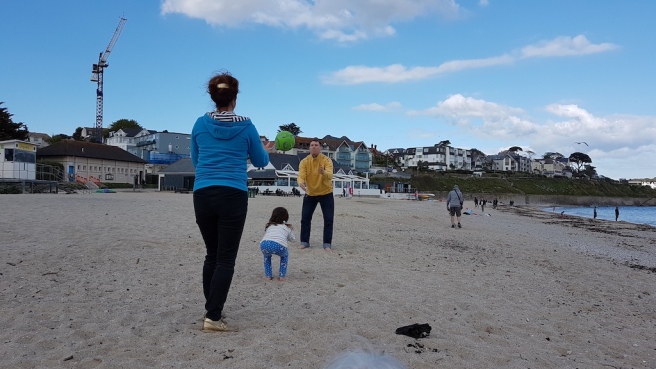 On the following day we went to Lydford Gorge in North Devon, lots of steps through woodland, to see the 30m White Lady waterfall 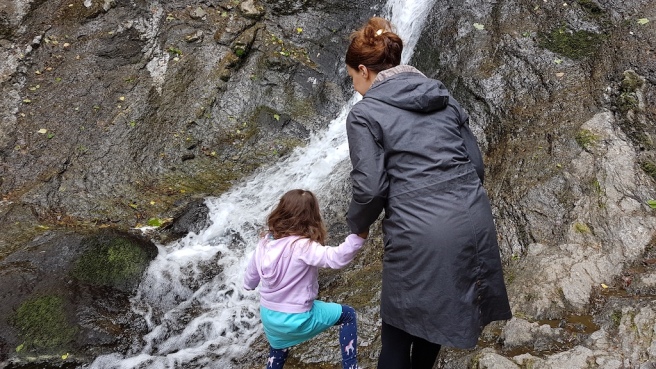 We then wandered along the trail (this goes from one NT cafe to another!)….. 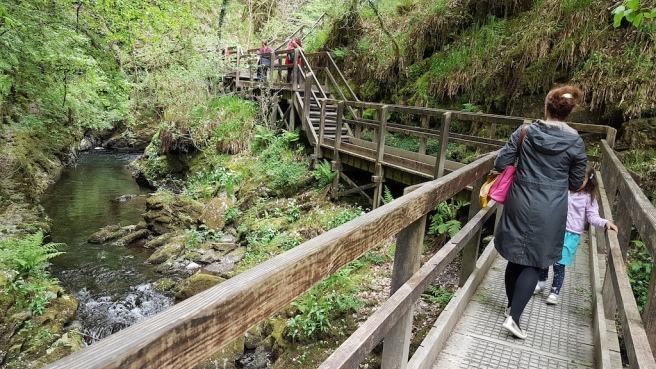 with the occasional rapids and falls… 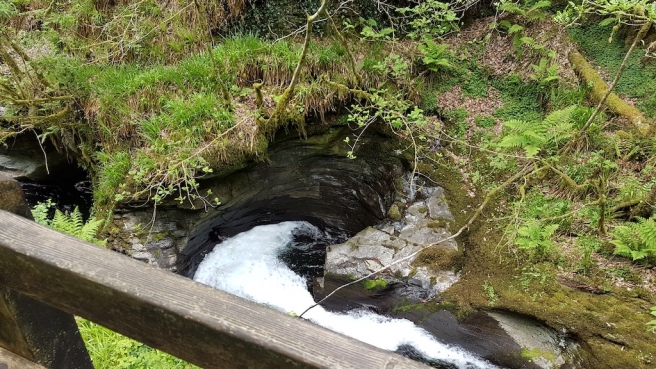 in parts it is quite narrow with a deep drop and the handrails then prove useful. 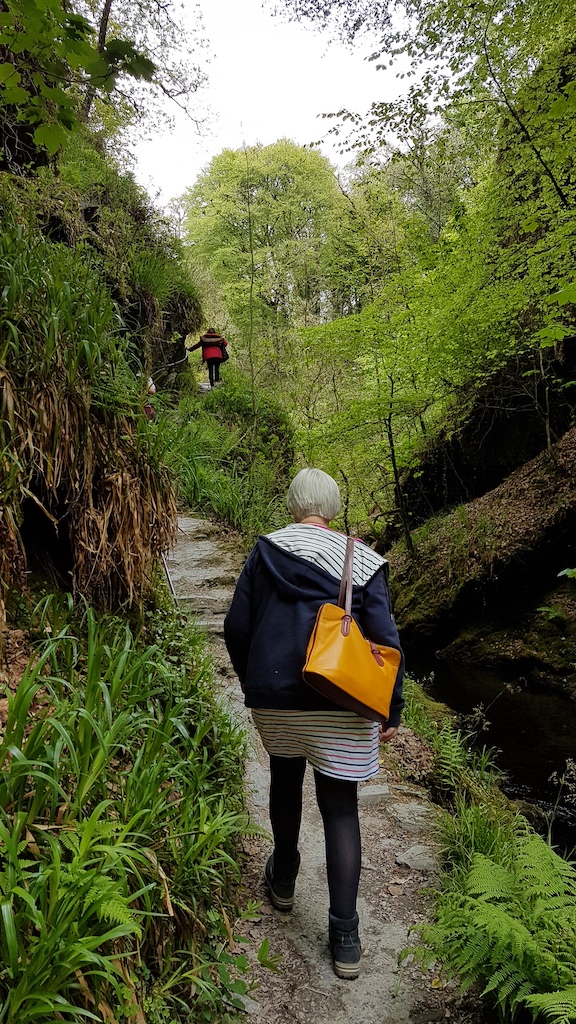 and at one point there is a ‘money bench’ with inserted coins of all ages and descriptions…….I must admit I am easily impressed sometimes, but all of us were agreed it was a magnificent walk and worth repeating.

On the last day we went to the climbing wall at Looe which said it would be open but wasn’t. We took the opportunity then to have a look round the Sardine Factory which tells you all about the history of Looe particularly as a sardine centre, and Katherine told us that it was very similar to the one in L’Escala. 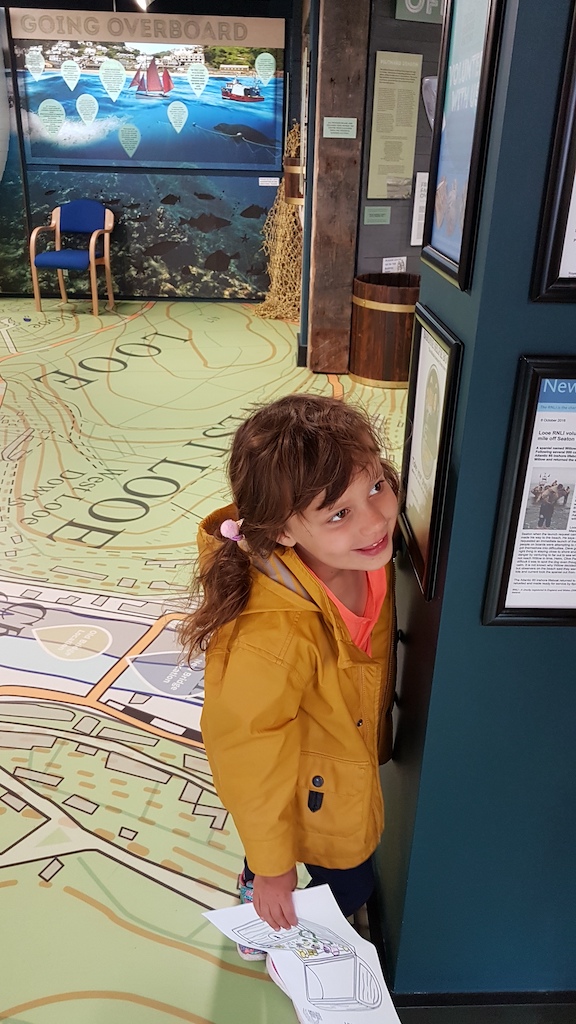 Now where am I?

Next stop was Victoria services to fill up with lpg and there we found that the Climbing Centre was absolutely terrific and more than made up for our disappointment in Looe.  I thought four and a half year old Aiisha was astonishing and totally unfazed. maybe a new long-term hobby for her? 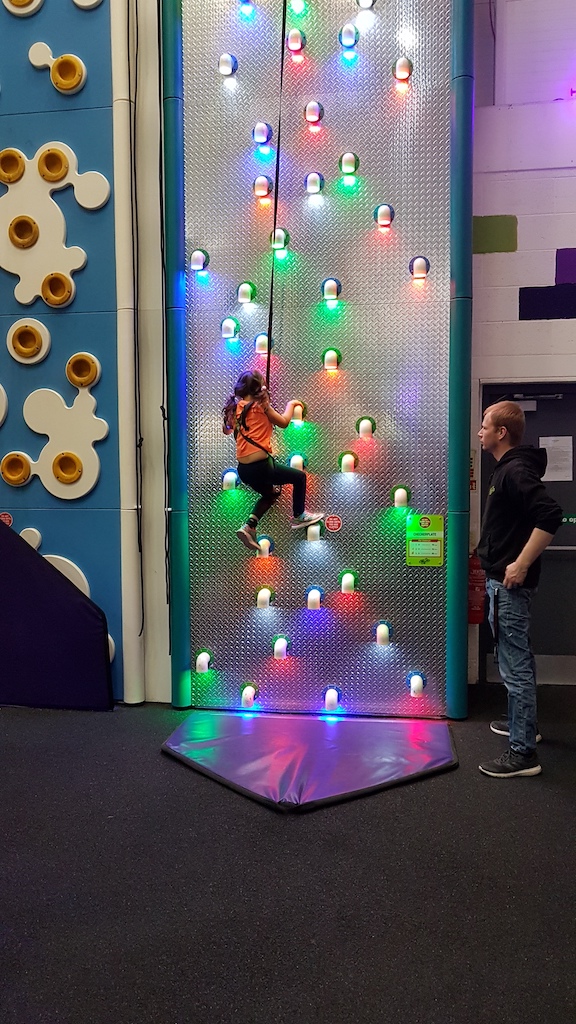 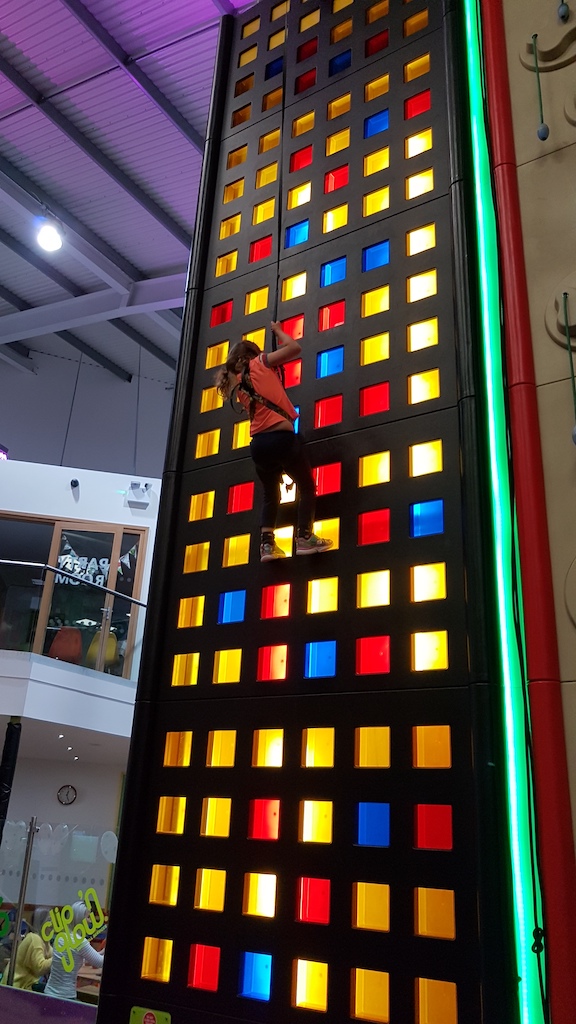 I might, just might, try this climbing business for myself sometime and see if I can allay my fear of heights. 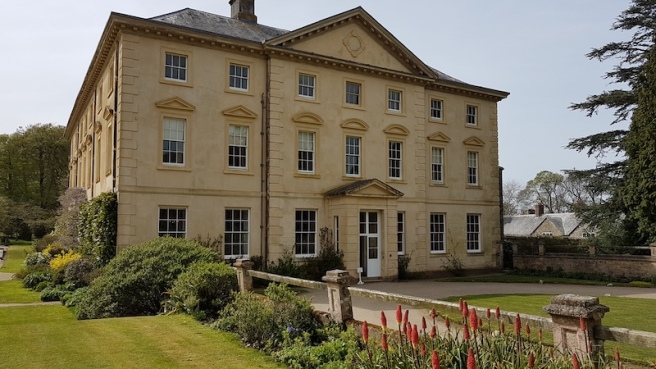 We’ve visited Pencarrow at slightly different times of the year, and it always pays as you see the grounds clad in different clothes as it were. This time it was mid April. Smart Classical house, still lived in by the family. No pics allowed inside.

After our guided tour, with a knowledgeable guide, we decided to once more walk the whole perimeter of the grounds. This used to be a formal Italian garden, but now blends in with the rest of the park.

Just past these trees was the grotto which we hadn’t visited before…. 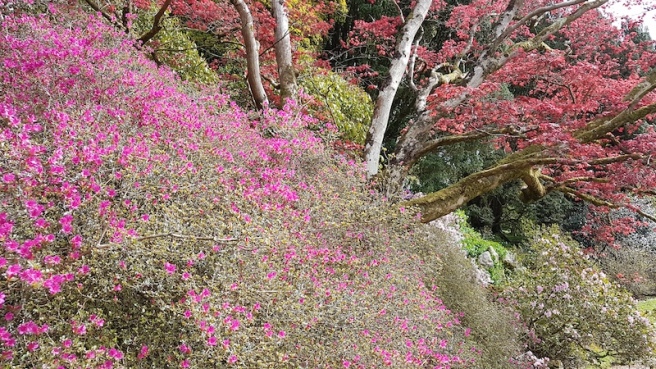 Frances descending to the underworld…. 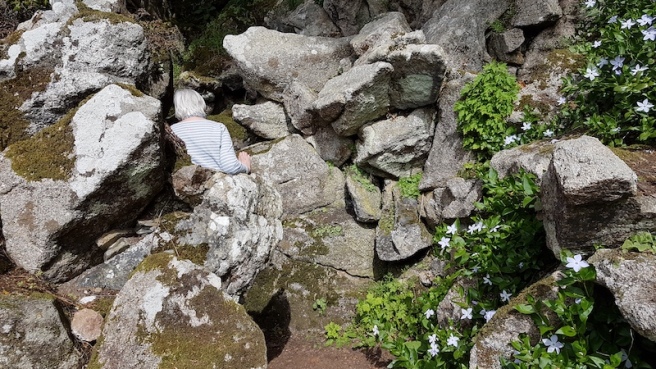 Nice views of the house itself on our walk…

Magnificent colours at this time of year…. 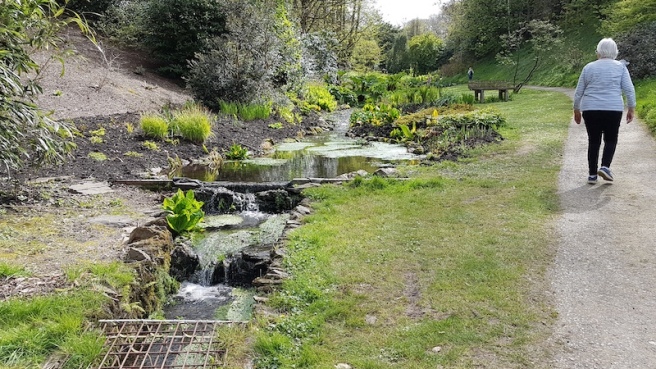 You then go down the ‘Cathedral’ walk which is particularly magnificent when the trees are leafless…. 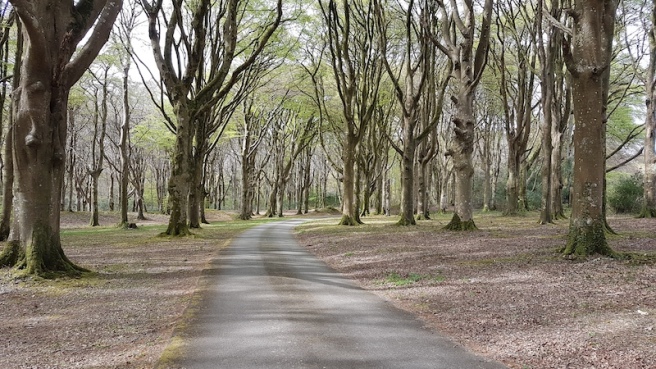 Then through the glory of Pencarrow the almost mile-long avenue of Rhododendrons and Azaleas…they really are enormous and laden with flowers.. 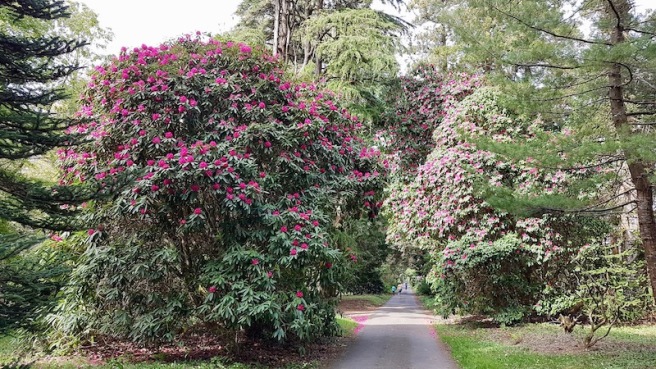 You don’t see notices like this in many places…. 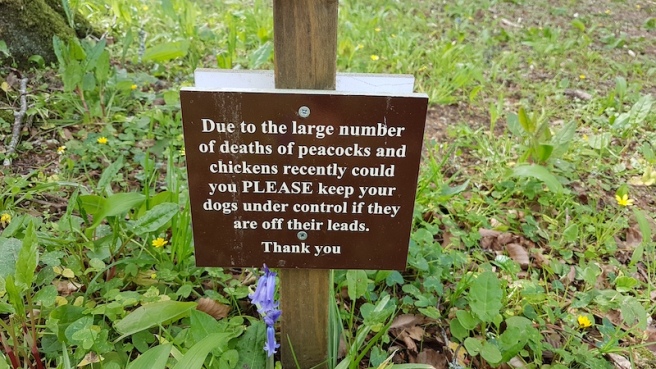 Pencarrow is quite near to us and well-worth the visit. Still, at this time of year it is almost as nice, perhaps better, to be in our own garden which has now come into its own…

And when we have enjoyed that our local lanes are full of botanical interest. At the moment crammed with bluebells…. 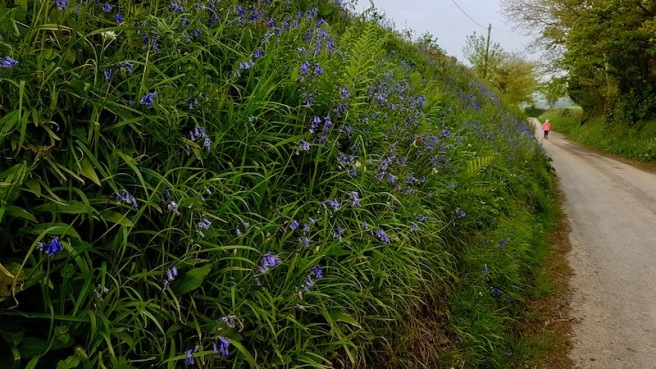 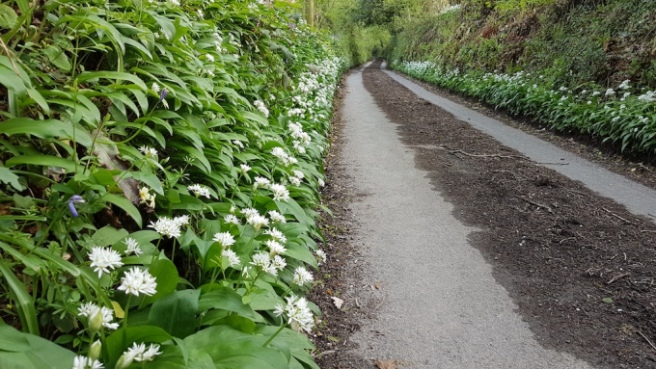 Amongst all the common roadside plants this single orchid stood out….. 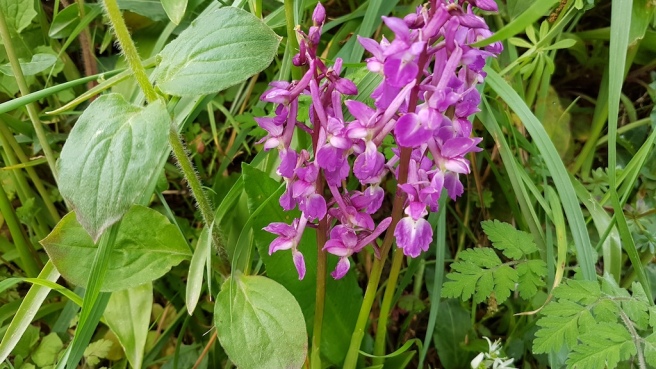 and in parts there are still clumps of late primroses…..

At  the village end of our walk we came across some white bluebells (!)….. 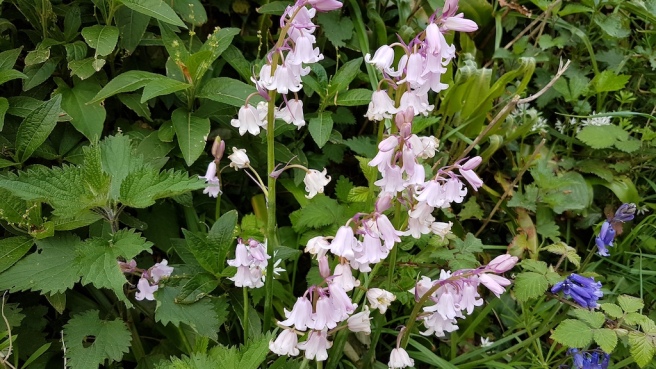