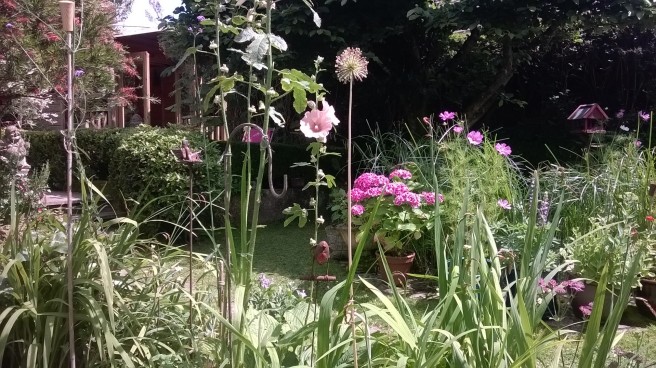 A really nice day today starting just after lunch with a village garden walkabout at Colebrook which is near Plympton. I don’t know where, but we picked up a brochure  beautifully put together, detailing gardens open during the season on behalf of St Luke’s Hospice in Plymouth. What a very good idea. There were only 5 gardens open today, each of them attached to ordinary semi-detached houses. The first was, as it happens, the best…it had everything, different areas including a fire-pit hut which must be nice in winter and a lovely neat hot tub which must be nice any time! There was quite a large pond and waterfall with a variety of fish, some very large, and planting and veg areas. Lots of ideas to take away. I know I won’t be satisfied until we have some water feature in our garden. There were refreshments available at one house and very nice they were too.

After that little bit of exercise (Colebrook is built into the side of a hill) we went to the Vue cinema in Plymouth where with our free Times+ tickets we were due to see Sofia Coppola’s La Traviata captured live in 4D from the Teatro Dell’Opera Di Roma. 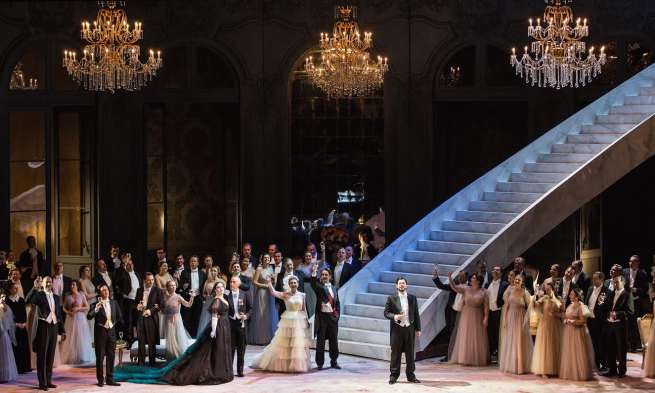 I had been advised by customers in Warwick Books to attend similar events at Warwick Arts Centre but we had never got round to doing so. My own recollection is that I have never been to a live opera (F. begs to differ), so I was very excited to be doing the next-best thing. What an experience. We could well have been there (apart from the odd niggling movement of a scenic view seen through the window of Violetta’s country house). The screen was huge, the sound was huge, the singing immense (what do I know?).

Francesca Dotto was hugely impressive as Violetta. How on earth can singers keep that up?…what range, what work, what finesse, I find it unbelievable that this sort of performance can be repeated on just one more night let alone a succession. The single most memorable thing I have seen in a long time. Terrific! The support from Antonio Poli, and Roberto Frontali was also amazing. The storyline based of course on a shortish story by Dumas was trite (as in all opera?). But the performance had me at least in tears. I know I am sentimental (like Churchill and the Welsh amongst others), and I well up at D-I-Y SOS or Love Your Garden or sporting climactics, but I have never known myself to be just sitting there with single tears dropping dramatically at intervals…..all quite quite wonderful really! Must get to the opera…….. 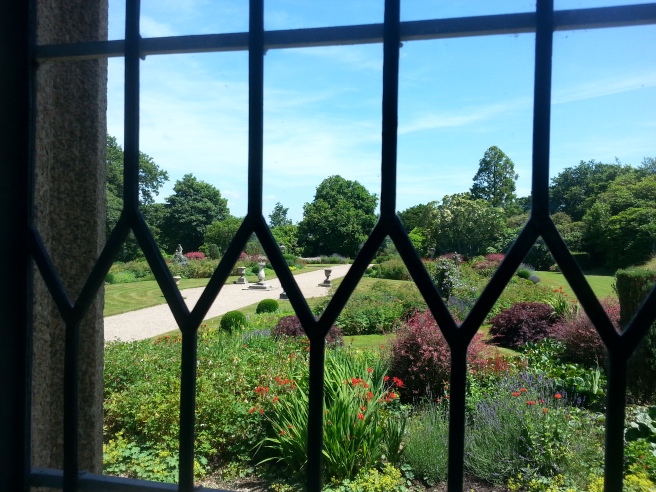 Mount Edgcumbe is the third of the great houses in our part of Cornwall, and as it was such a nice sunny day we thought a drive along the coast to somewhere we hadn’t visited before would be a good idea. So it proved. Samuel Pepys no less said of Mount Edgcumbe “A most beautiful place as ever was seen”. I couldn’t agree more. What a revelation. There were lots of folk about but it is only a short hop on the passenger ferry from Plymouth, so that was to be expected.

The setting is immense from the church at the top of the hill to the formal gardens  to the landscaped deer parkland to the huge vistas of Plymouth Sound. The house now covers the footprint of the old Tudor house having been bombed to smithereens in the Second World War and rebuilt on a much smaller scale than previously. It is interesting to see pictures of the magnificent pile pre-war…. 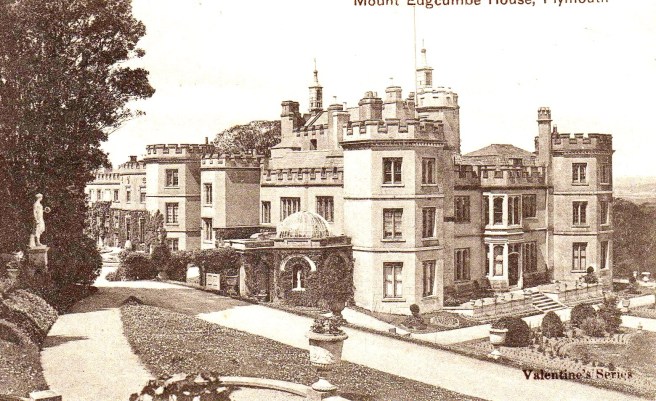 and compare with the present house rebuilt by the Edgcumbes 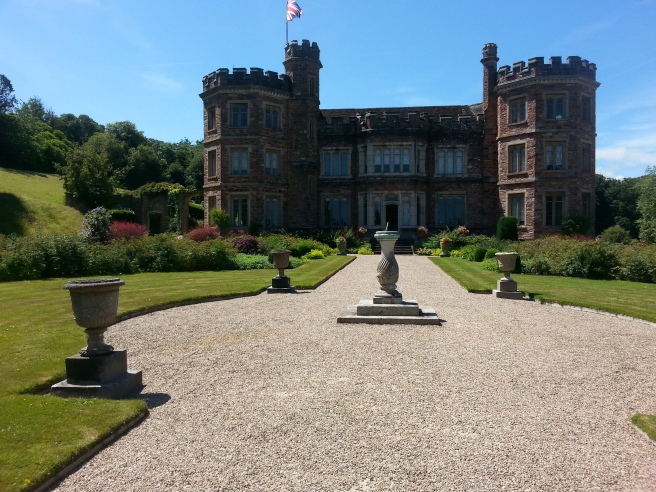 But as to the magnificence of the house, now owned by Cornwall County Council and Plymouth City Council we were not to be disappointed. It still contains treasures accumulated by the Edgcumbes over centuries and the structure of the house and its contents were full of interest. I particularly enjoyed the dining room with its naval table and crest of King Charles I… 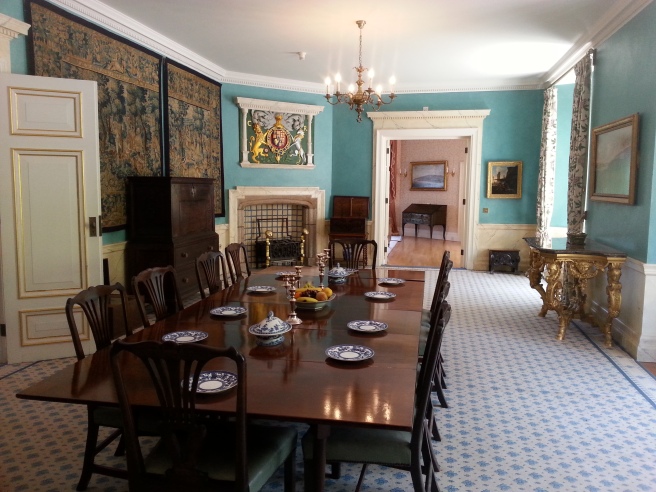 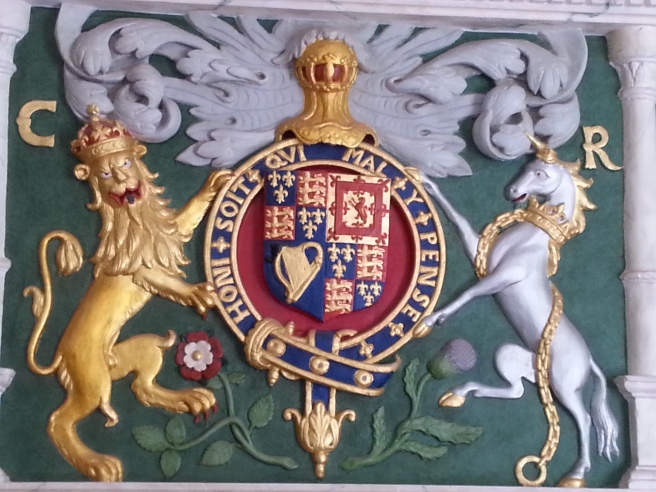 and the octagonal rooms at the four corners were some of the most beautiful imaginable, the boudoir being particularly enchanting 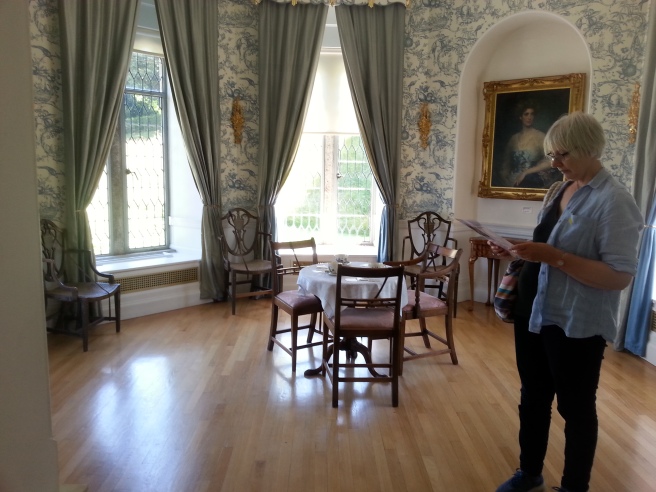 The magnificent settee in the library was one of the objects hurriedly rescued during the bombing and thrown into bushes where it lay for several years before being rescued and sent to France for restoration….a great story. 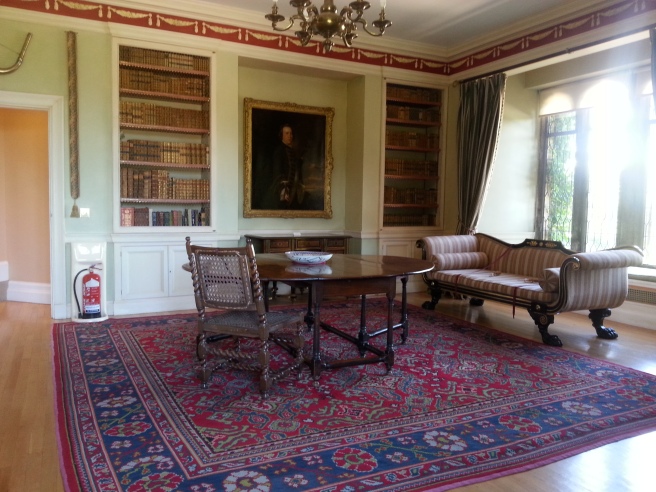 Absolutely fascinating were the pair of hunting horns recovered locally and reckoned to be from about 1000 BC. They could have been made yesterday…..I think they are astounding 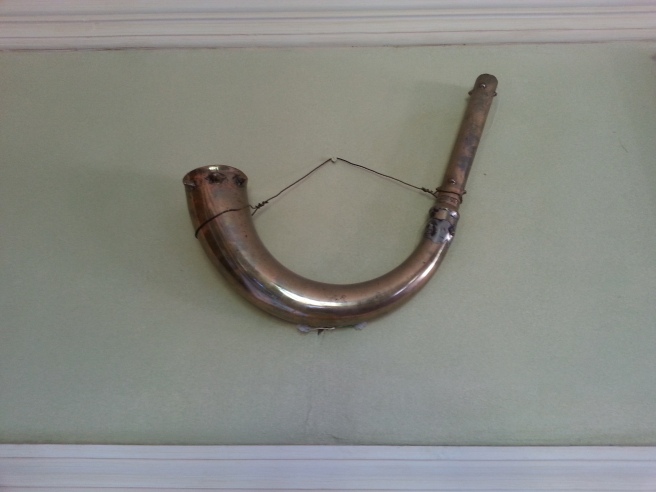 The toby jug on display was one of the very first. I used to have quite a collection myself, until being forced to get rid of them during our continual downsizing. 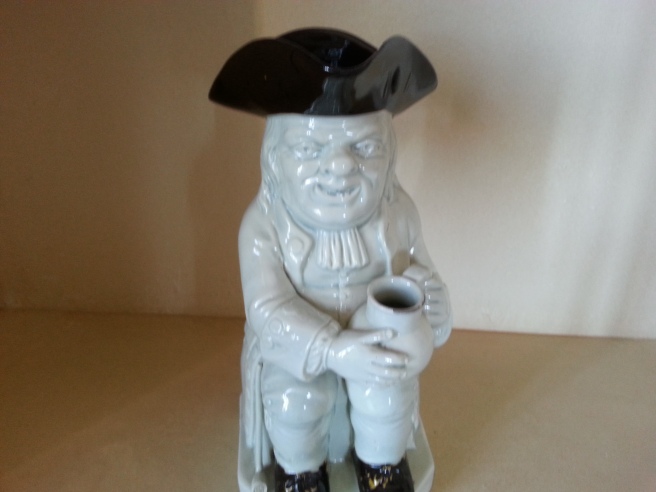 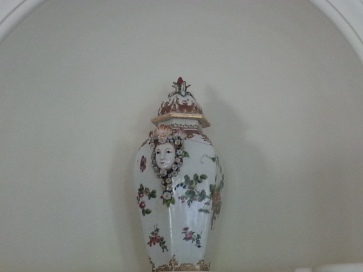 And the two vases in the dining room were also amongst the very first to be made in this country from china clay, a local man William Cookworthy discovering the secret of making porcelain and then setting up his factory in Plymouth and then Bristol from where these vases originated. His factory was only in existence for a few years, so these are very rare survivors indeed. It is astonishing to think that this man was responsible for Cornwall’s china clay industry which is still going strong and indeed at St Austell the mines are the largest in the world. Looking at the satellite view of St Austell on Google Maps is very instructive! 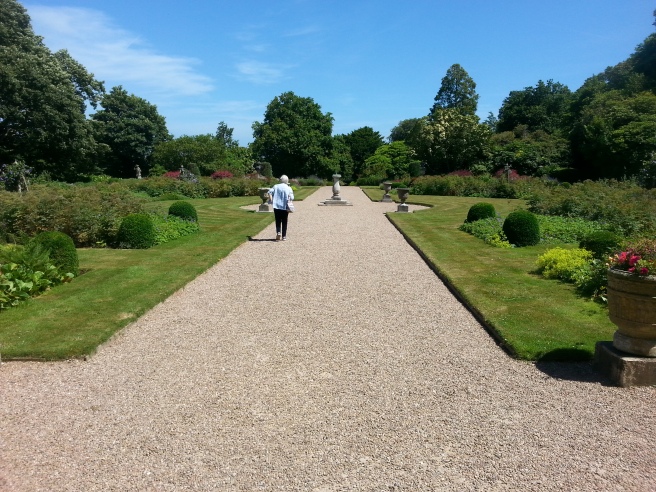 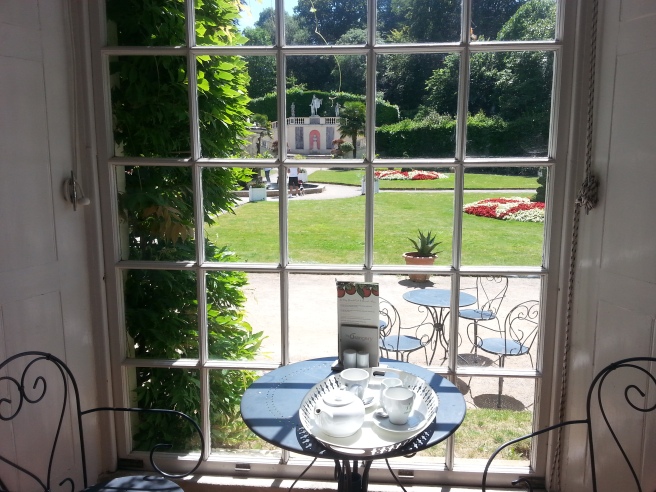 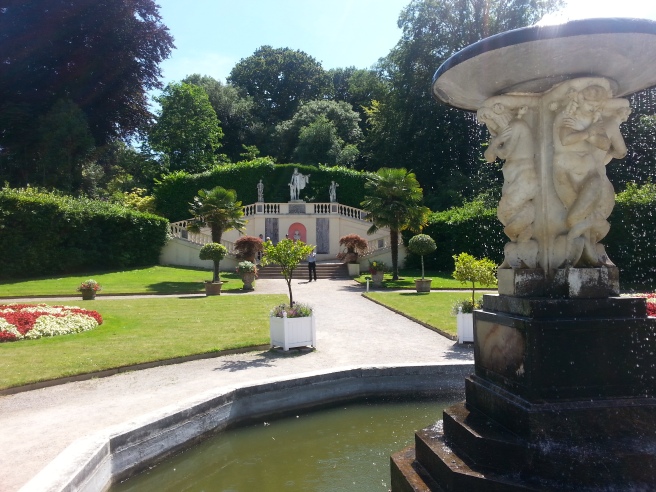 The walk back up the hill was rewarded with marvellous views of Plymouth Sound….a lovely place for a picnic, which we duly noted…. 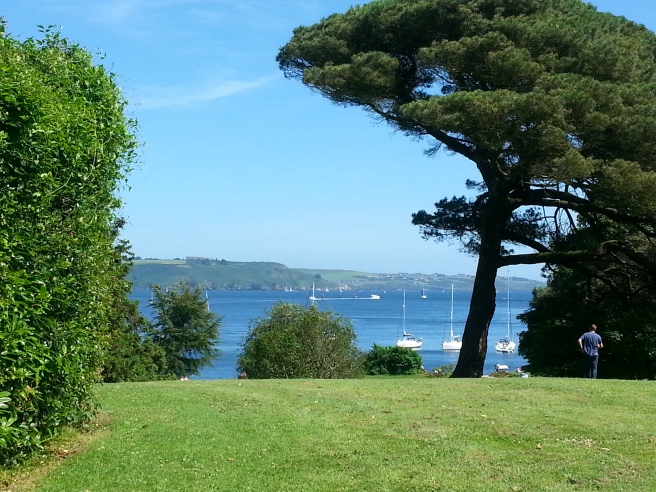 I am writing this the day after Trelawney Day, having just found out about it! Had I known I would perhaps have gone to the yearly commemorative concert in Pelynt yesterday. Pelynt is a village proud of its connection with a Cornish hero. I learned to play this tune on the recorder, when I was about eight I suppose, which is why it is familiar to me and why I burst into song whenever we drive through Pelynt (well the chorus which is all I can remember!).

Jonathan Trelawny was born in Pelynt in 1650. He was ordained in 1673. Along with his brother, Major General Charles Trelawny, he helped to put down the rebellion in the west led by the Duke of Monmouth. In gratitude for his services, King James IIknighted him and appointed him Bishop of Bristol in 1685.

Although he was loyal to the crown, Trelawny was one of seven Bishops who petitioned against the king’s Declaration of Indulgence in 1667, granting religious tolerance to the Catholics. Along with the other bishops, he was imprisoned in the Tower of London for three weeks, then tried and acquitted. He became Bishop of Exeter in 1688 and Bishop of Winchester in 1707. He died in 1721.

Trelawny was the hero of the 1825 “The Song of the Western Men” by R. S. Hawker, the well known Vicar of Morwenstow Better known as “And shall Trelawny die?” or just plain “Trelawny”, the song was derived from an old Cornish proverb which forms the chorus.

Hawker was parson of the parish of Morwenstow on the desolate north Cornish coast for forty-one years. He first became known for his work in rescuing and burying the remains of shipwreck victims washed up on the jagged rocks below his church. He was one of the finest poets of his period, and his Arthurian masterpiece, The Quest of the Sangraal, drew from Tennyson the acclamation: “Hawker has beaten me on my own ground.”

His eccentricity was a by-word. He dressed in claret-coloured coat, blue fisherman’s jersey, long sea-boots and pink brimless hat. He talked to birds, invited his nine cats into church, and excommunicated one of them when it caught a mouse on a Sunday.

Hawker is best known for his ballad about the imprisonment of Bishop Trelawny, The Song of the Western Men. Of this ballad he wrote:

The history of that Ballad is suggestive of my whole life. I published it first anonymously in a Plymouth Paper. Everybody liked it. It, not myself, became popular. I was unnoted and unknown. It was seen by Mr Davies Gilbert, President of the Society of Antiquaries, etc., etc., and by him reprinted at his own Private Press at Eastbourne. Then it attracted the notice of Sir Walter Scott, who praised it, not me, unconscious of the Author. Afterwards Macaulay (Lord) extolled it in his History of England. All these years the Song has been bought and sold, set to music and applauded, while I have lived on among these far away rocks unprofited, unpraised and unknown. This is an epitome of my whole life. Others have drawn profit from my brain while I have been coolly relinquished to obscurity and unrequital and neglect.

A good sword and a trusty hand!
A merry heart and true!
King James’s men shall understand
What Cornish lads can do!
And have they fixed the where and when?
And shall Trelawny die?
Here’s twenty thousand Cornish men
Will know the reason why!

Out spake their Captain brave and bold:
A merry wight was he:
Though London Tower were Michael’s hold,
We’ll set Trelawny free!
‘We’ll cross the Tamar, land to land:
The Severn is no stay:
With “one and all,” and hand in hand;
And who shall bid us nay?

And when we come to London Wall,
A pleasant sight to view,
Come forth! come forth! ye cowards all:
Here’s men as good as you.
‘Trelawny he’s in keep and hold;
Trelawny he may die:
Here’s twenty thousand Cornish bold
Will know the reason why 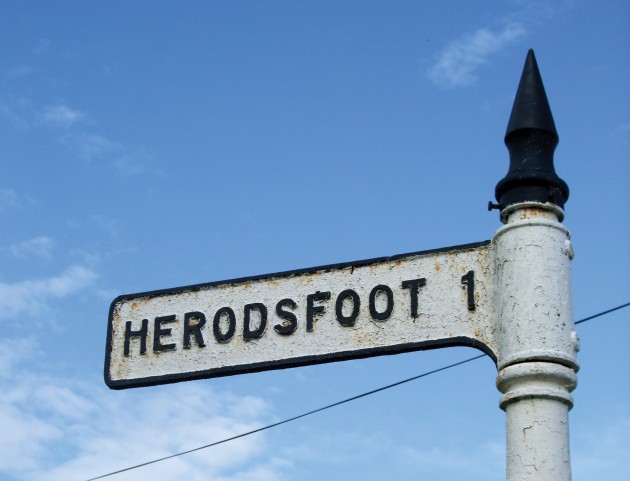 Herodsfoot is just over a mile from where we live and we have driven through it and walked through the woods to it. It is a lovely tranquil little place set around its stream and surrounded by hills and woods with its church on the upper slopes looking very Swiss. It is a Thankful Village and an interesting article on the BBC site tells us this means it is one of a tiny handful of settlements (53 in fact) where all those who served returned home after the First World War. But Herodsfoot was even luckier, if luck it be, in that it is 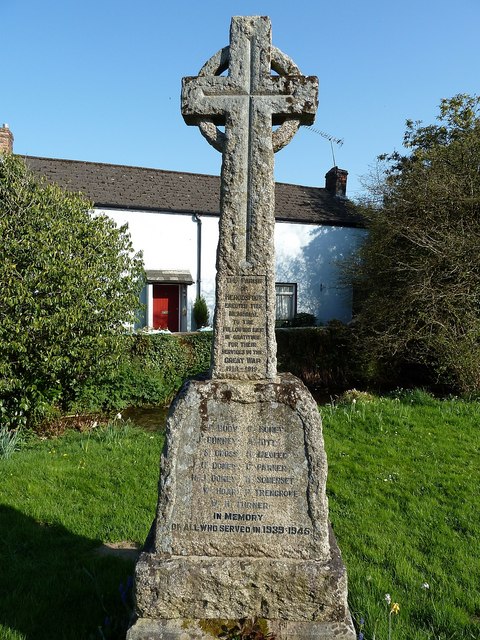 a Doubly Thankful village, one of only 14 places in the UK where all survived the Second World War too. There is a memorial on the green…..The inscription is as follows….
(On the shaft)
The parish of Herodsfoot erected this memorial to the following men in gratitude for their services in the Great War 1914-1919
(On the base, the following names)
J Body . . C Honey
J Bunney . . A Kitt
S Cross . . H Medlen
JH Doney . . C Parker
RJ Doney . . H Somerset
W Hoar . . P Trengrove
WH Turner
(beneath the names as an addition)
In memory of all who served in 1939-1945.

See also an article on-line for some background to these villages., and the results of detailed research to see whether the evidence for no deaths for particular villages is confirmed. There appears to be no doubt as to the valid claim of Herodsfoot to be a Doubly Thankful Village. 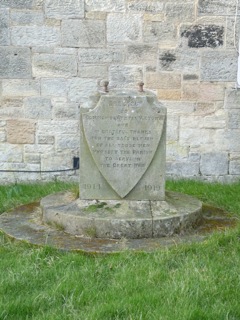 Our friends Julia and Allan live in Meldon, Northumberland, another village about which there appears to be no doubt as to its validity as a Thankful Village. There is a memorial stone there….but this is at the school house which is now a private house and so the stone is not publicly accessible. However Allan, who is a retired Art teacher and jeweller, has designed a 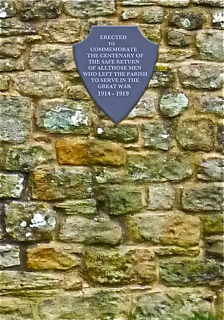 new memorial plaque for the church in Meldon. A lovely thing to do as it is really important that we remember the lucky few at the same time as we commemorate the horrors of the two wars. I shall look forward to seeing it when we are next up there.