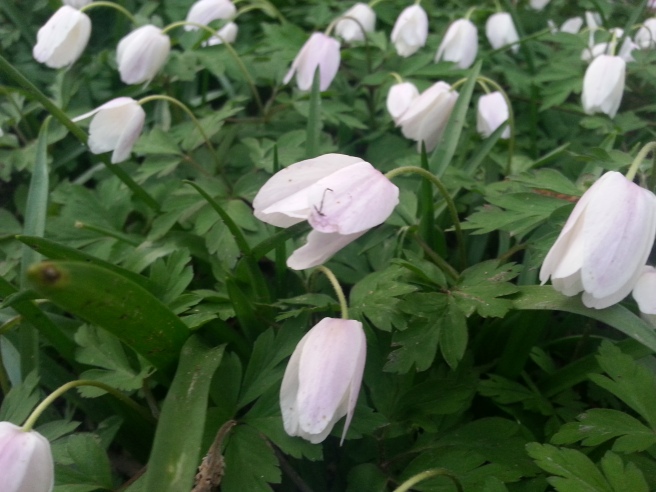 There are several woods behind our house in Coventry, the main one being
Brandon Wood which ‘lies about 6 km east of Coventry and covers a total area of 178 acres. It was quoted in the Doomsday Book as woodland in 1086 and is now a designated Planted Ancient Woodland Site (PAWS).

Since 1981 it has been maintained and improved by voluntary workers from the Friends of Brandon Wood and is now reverting to natural broad-leaved woodland.

Nationally, it is the first designated Community Woodland and was purchased from the Forestry Commission for £130,000 in 2000 by the Friends and is managed by the Trustees.

Brandon Wood will remain in the hands of the community in perpetuity’.

We walk though the woods several times a week and throughout the seasons, and in early Spring we are rewarded with a spectacular display of flowers…. 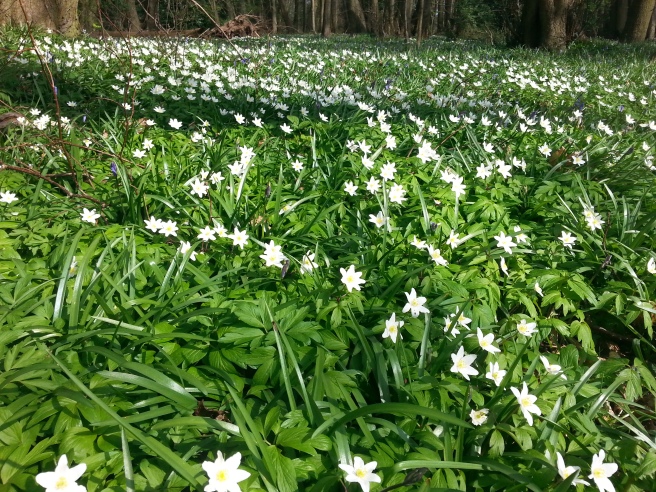 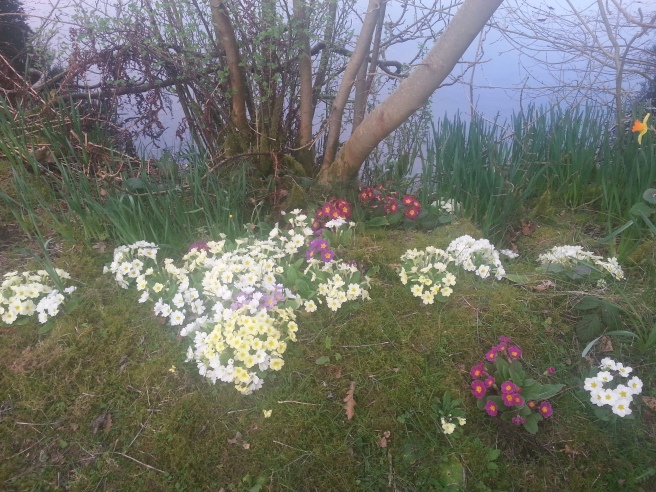 One of our favourite watering holes which lies half way between our two bookshops in Warwick and Kenilworth, and was therefore an ideal spot to unwind and discuss the day’s activities is the Saxon Mill which has a wonderful Avon-side location and a working mill wheel. Our choice location on a nice evening is the little wooden bridge connecting the mill to the opposite bank..

Here is F. on the bridge with drink in hand. You can just see the evocative ruins of Guy’s Cliffs House in the background which is a 10 minute stroll along the river. You end up opposite the house and the cave about which this romantic legend is told…..

‘Guy’s Cliffe was a longtime favoured haunt for hermits, the first recorded being an unknown Christian who afforded “spiritual comfort” to Guy of Warwick around 929 AD. According to legend Guy was a Saxon thought to have been born in Warwick or possibly Wallingford. He fell in love with Felice the daughter of Rohund, Earl of Warwick. He was told to prove himself before gaining her hand and so embarked on a series of adventures. He slaughtered an enormous dun cow which was ravaging Dunsmore Heath and a dragon which was terrifying Yorkshire. He fought Turks and brigands until it was finally agreed that he should marry Felice. However, after their marriage, he immediately set off for the Crusades and won countless battles against the Saracens.

Guy returned to England when the Danes were besieging King Athelstan at Winchester and demanding the surrender of England. It was agreed that the decision should rest on a single combat between the English and Danish champions. Guy, who had forsaken his previous bloodthirsty life and become a penitent palmer, agreed to one more battle against the Danish champion, Colbrand. Weary as he was, he fought and killed Colbrand and then resumed his life as a pilgrim. He returned to Warwick and received daily alms from Felice who did not recognise him in his penitent’s robes. Guy lived for some years in a cave in a hole in the rocks by the river bank at Guy’s Cliffe and, when he felt death to be approaching, sent his wedding ring to Felice, telling her that she would find him dead in front of the altar in the chapel of the hermitage. Felice followed his instructions and was so grief stricken upon realising that he was her husband and was now dead that she flung herself from the cliff adjoining the hermitage (Felice’s Leap).’

The view from the bridge looking the other way is equally charming. We were sitting in the first-floor restaurant once with this view and we saw a mother duck sitting proudly on a nest on the group of rushes you can see. Three chicks were having a brief trial swim around the reeds. The mother called. Two chicks got straight back onto the nest. The other one didn’t. After a while it tried to get back and the mother sent it packing! Eventually it sneaked up the back way…….so all ended well.