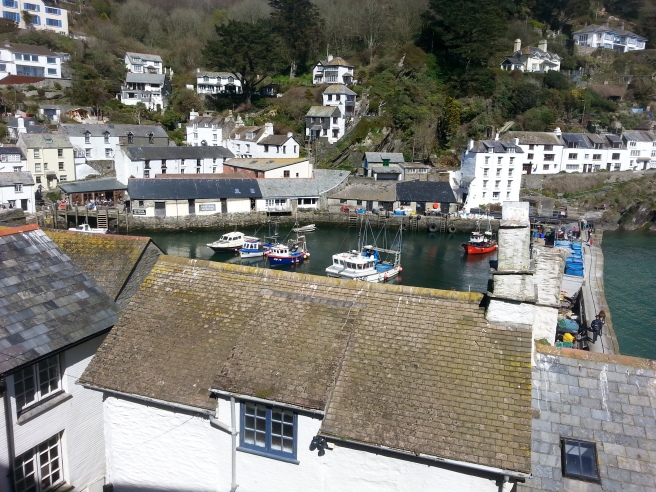 Having been within striking distance of Polperro we went there today using our bus passes, and the ‘normal’ bus we use for Looe one way or Liskeard the other. The route of the 73 is actually from Liskeard to Polperro. I said I would find out more about the Roman bridge. Here is the entry in ‘British Listed Buildings’…

‘Road bridge at head of Polperro harbour over stream. Remodelled after 1854. Stone rubble with dressed round stone arch with long granite keystone on harbour side.
Harbour side with parapet slightly splayed over abutments and continued to south to
form west wall of the harbour (qv). Narrow parapet on west side over stream running 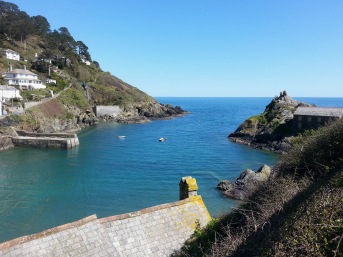 between House on Props (qv) and coal sheds, now shops to south west.
An early photograph taken by Lewis Harding in circa 1854 illustrating a thrasher
shark on a cart in Polperro shows the bridge in the background. Here the stone
rubble bridge has a flat timber lintel rather than the present dressed stone arch.
Photograph of fish quay at turn of the C19 illustrates the present bridge in the background.
de Burlet, S Portrait of Polperro 1977 p 6
Lanyon, A The Rooks of Trelawne 1976.’

Another absolutely fantastic warm Spring day, the sea a Mediterranean blue. We climbed 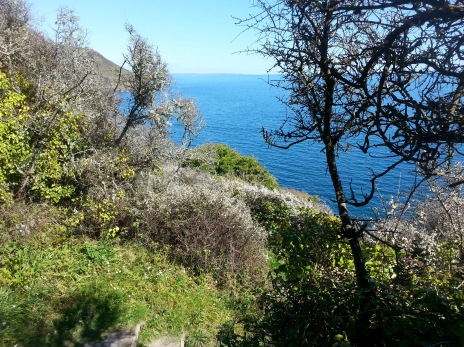 up to the top of the cliffs and

had a short walk Westwards along the Coastal Path returning on a higher route. Plenty of gorse and wild garlic in bloom. Could be the South of France!