Today we went in search of a bus service frankly I didn’t believe existed. I was wrong. We took the car to Hannafore, great place to park for Looe, then waited for the 381 which turned out to be a minibus holding 16 people (or, strangely I thought, 4 wheelchairs plus the driver ). The bus service was free for us with our passes and again this was a surprise. The driver took us up the steep residential hill in West Looe, full of fishermen’s cottages and impassable to a normal bus, then via Polperro to Lansallo, and down very rural narrow

lanes with lots of grass growing in the middle, to end up in Polruan. Here we took the ferry across to Fowey, £2 each, each way, so we were glad the bus was free! As the day was cold we went straight for a warming coffee in the new restaurant on the front Havener’s…fantastic location, very nicely done up, excellent welcome, prices a little high. We then did our usual amble up Fore Street, seeing some good paintings for over our fireplace but too expensive, and buying a lovely rosemary and walnut loaf from Quay Bakery. It was already time to go to the ferry back across to Polruan as we only had just over two hours at our location (the following and last bus was another 4 hours away). Whilst waiting we had a quick drink in the Lugger Inn on the quay, nice pint from their own micro-brewery in Looe, and log fire. We made a mental note of the start of the famous Hall walk which we will do soon. More great scenery on the way back and we noted the NT car park which would be our access for Lantic Bay in the future. Picnic on the beach and then short mile and a half walk to Polruan? Today we were home by 2pm and considered it a lovely little trip out.

Polruan is an ancient fishing village just across the water from the better-known Fowey. Built on a very steep hill, Polruan is bounded on three sides by water; Pont Creek to the north, the River Fowey to the west and the English Channel to the south. At the top of Polruan Hill stands St Saviour’s Ruin, which pre-dates all of the churches in the area and is built on a site first occupied by St Ruan, after whom Polruan is named. St Saviour’s ruin, which was equipped with bells, would have been both a landmark for ships and a good lookout point over the strategically important Fowey harbour. The ruin dates from the eighth century, although it was enlarged by Sir Richard Edgcumbe in 1488.

At the bottom of the hill, and sheltered by it, is Polruan Pool, which has long been a haven for small boats. Two blockhouses were built in Polruan and Fowey in the fourteenth century to protect the harbour from attack by pirates or the French. A chain was pulled tight across the river between the blockhouses to stop vessels entering in times of crisis. Although the one on the Fowey side is collapsing beyond repair, the one on the the Polruan side has been lovingly restored.

Below the cliffs to the south west of St Saviour’s Point, on the eastern tip of the Fowey river, stands Punche’s Cross. There are numerous theories as to the origins of the cross, which is marked on very early charts. One story holds that it is named after Pontius Pilate. Another says that the cross was put there to mark a visit to Polruan by Jesus and his uncle, Joseph of Arimethea, who apparently came to inspect the tin mines! Today the cross is in the care of the harbour commissioners. 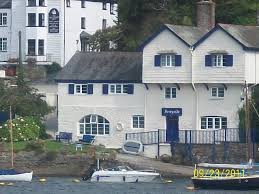 Just outside the village lies a house called Ferryside, which was bought by the DuMaurier family in 1927 and whose back wall consists entirely of the cliff face. Daphne DuMaurier wrote her first novel here in 1928 and her son and his family still live there. Polruan is connected to Fowey by the Polruan Ferry, which crosses the harbour every fifteen minutes throughout the year.

Aside from fishing, Polruan has a long history of boatbuilding and there is still an active boatyard today.