Well not quite. We had decided to do a 4-5 mile walk around the head at Holywell Bay. However! When we got there we were in a very large car jam to wait for available spaces in the car park. We turned round in the car park of the thatched 13th century Treguth Inn (which we noted for another occasion) and headed to Lerryn for a walk along the river. However, as we were passing Lanhydrock we decided on a whim to do a walk in

the grounds. Right decision. The very affable guide in the entrance told us how beautiful the river walk was so having given us a map and guide to that off we went. The first part of the walk was all downhill through the Great Wood with its beech, oak, sycamore, ash, and sweet chestnut and was very pretty. However there were a few too many choices of path with not very good signposting so we went a little wrong at the bottom of the hill. However this gave us the opportunity to see even more of the river Fowey which was delightful, very fast-running and containing sea trout and salmon. We did in fact see a couple of rises which I take it were sea trout. 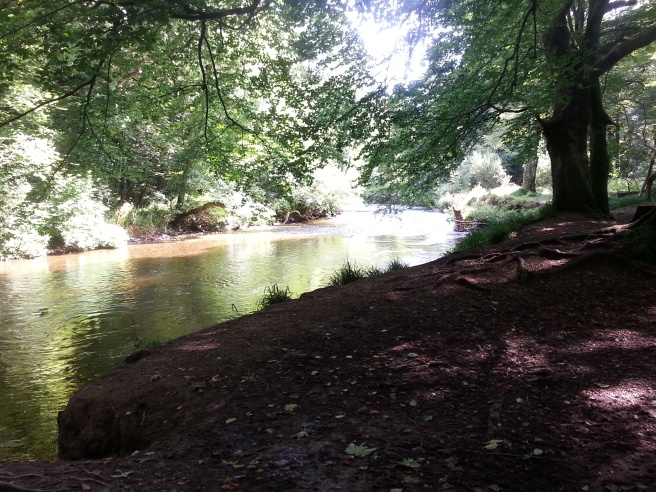 Eventually we reached Respryn bridge. There has been a bridge here since 1300. The present bridge has 5 arches of different sizes and dates….the middle one is the smallest and oldest dating from the fifteenth century.

From here we walked, to the accompaniment of a couple of buzzards mewing at some height, up the Avenue. This was originally planted in 1648 with a single row of sycamore on either side of the driveway to celebrate the Parliamentarian victory in the Civil War. In 1827 it was widened by the addition of two rows of Beech which is how we see it

today. A magnificent entrance to the House, surrounded by parkland and set in a bowl of hills. one quirky thing about the lodge at the entrance to the Avenue was that every upper window had large and rather spooky dolls. Worrying! The gateway to Lanhydrock is very impressive, almost as impressive as the house itself and is original, built in 1657 by The Lord John Robartes, whose initials along with those of his wife Lucy can be seen carved in the stone. 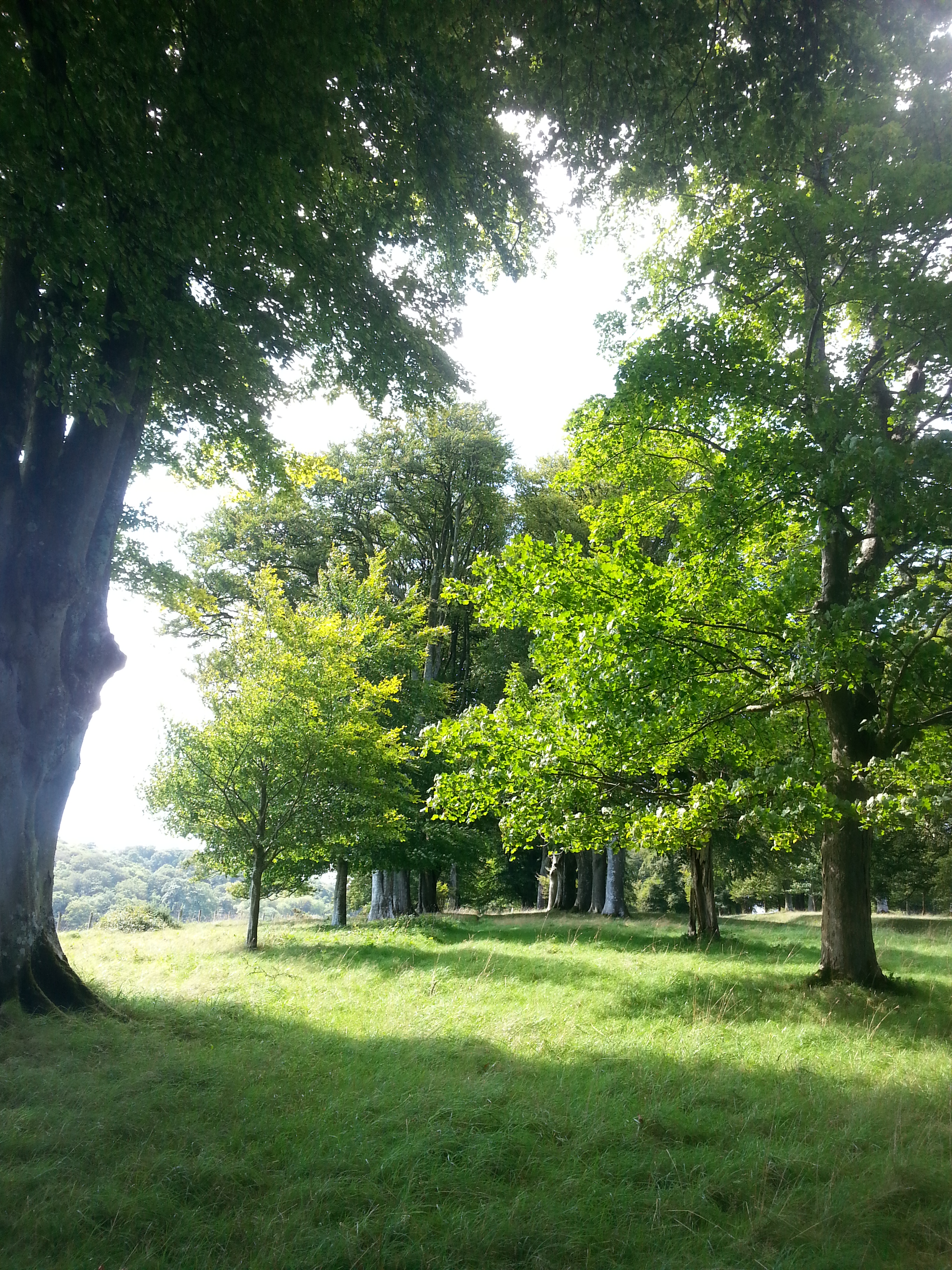 A cup of tea was earned, and this was followed by a walk past the church and into the splendid and rather unusual upper garden which is at roof height…..

There were some beautiful herbaceous borders only just past their prime and this got me thinking about our own garden. But as it is plagued by literally hundreds and hundreds of large slimy slugs with which I do daily battle, I think this is unfortunately a no no. 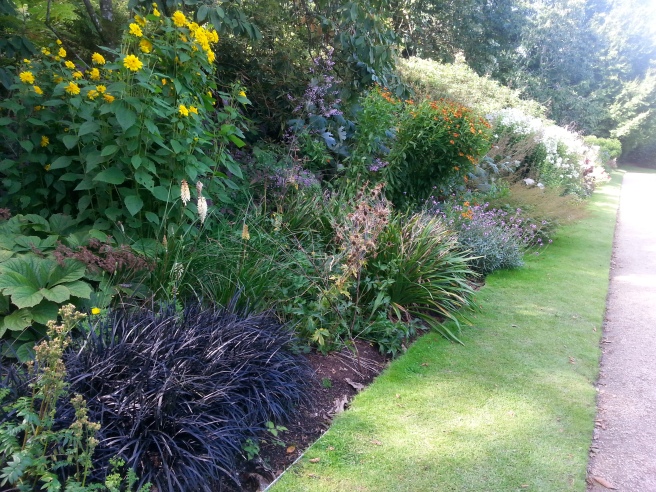 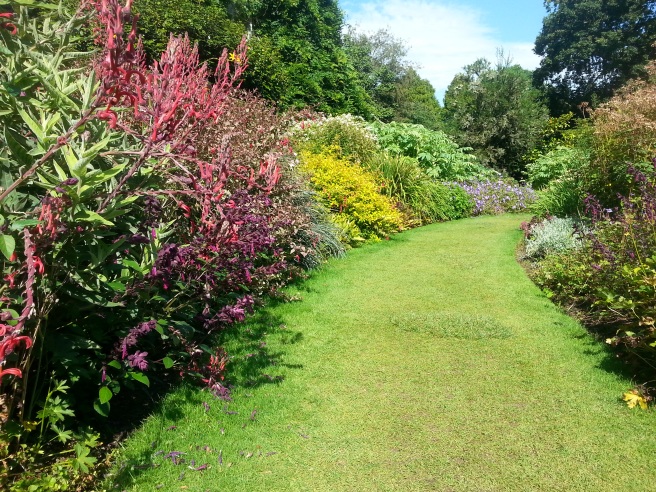 The formal gardens to the front and side of the House are what I would describe as Blackpool parks c 1960 and not at all to our taste! 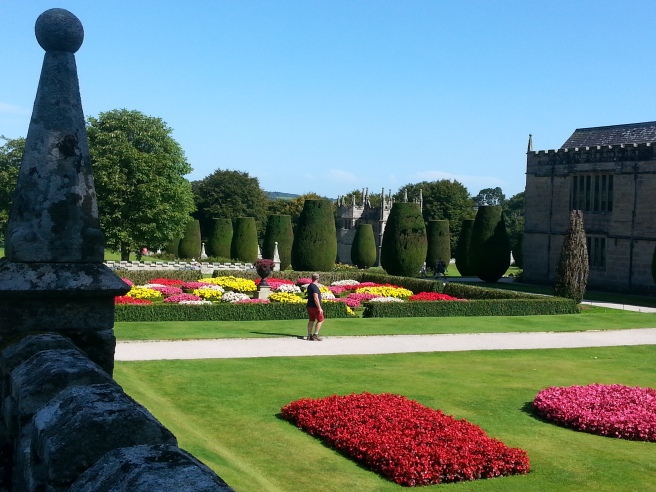 So, the day was not a disaster and in fact proved highly enjoyable……