The day started fine (not forecast) so seas and skies were blue on our way to Porthleven for two nights stay at Kota which was a Father’s Day present for me and a birthday present from me to F.  After calling at Burncose nurseries on the way for a look at their extensive plant collection, a warm trip dictated a stop for a pint at the very pretty Crown 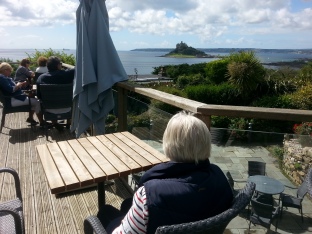 Inn at Goldsithney (itself a very pretty village). We then by accident (to look at the view of St Michael’s Mount from their roadside carpark) called at Mount Haven a luxury hotel on the outskirts of Marazion where we then had lunch – and very good it was too with the delight of sitting on the garden terrace with views of the Mount in the Bay. We will certainly call at Mount Haven again. Satisfied, we drove through Marazion which was very busy on to our today’s afternoon destination of Penzance where we parked and went to the Stanhope Forbes exhibition at our favourite Penlee House Gallery and Museum This time, having parked roadside in North Penzance for free, we approached the Museum through the Remembrance Gardens, a beautiful way in indeed.

The exhibition itself was marvellous. We have seen many Newlyn School paintings before at the Museum, but here was the work of a painter who has been called the Father of the Newlyn School in depth. Paintings had been acquired from seemingly everywhere from the Tate to Hartlepool and Preston and many private collections, and so we were presented with the whole of his career. The presentation was impeccable with just the right amount of background and information and we really enjoyed our time here.

The painting on the left is the one he did to accompany becoming a member of the Royal Academy with F. looking at a self-portrait. And below is one of his industrial scenes in Sheffield done as War Artist…. 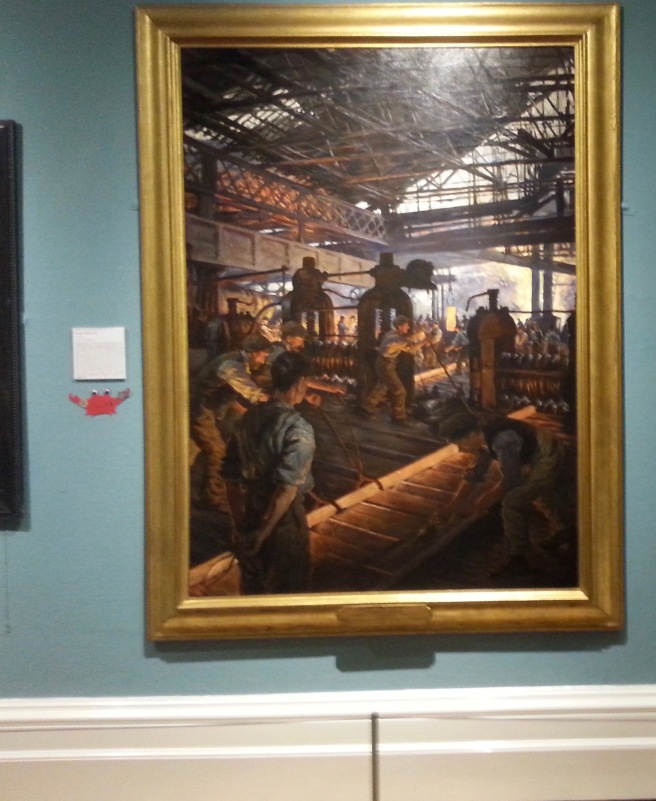 But it was as an artist who captured maritime scenes of the old pre-War Newlyn au plein air that he is remembered. ‘A Fish Sale On A Cornish Beach’ is one of his most famous paintings. Throughout his very long career he took a fascination with light and time of day into his work and proved a skilled operator.

Whilst in the exhibition til closing time, the heavens opened and refreshed the beautiful park in which the Museum is located rendering it even more beautiful…….such are the benefits of British weather!

and before dinner we went for a stroll around the harbour to build up an appetite.  The changeable weather was good for taking pictures. We watched two gigs coming home with their raucous female coxes and had a good look at the now famous picture of Porthleven in storms….incredible. 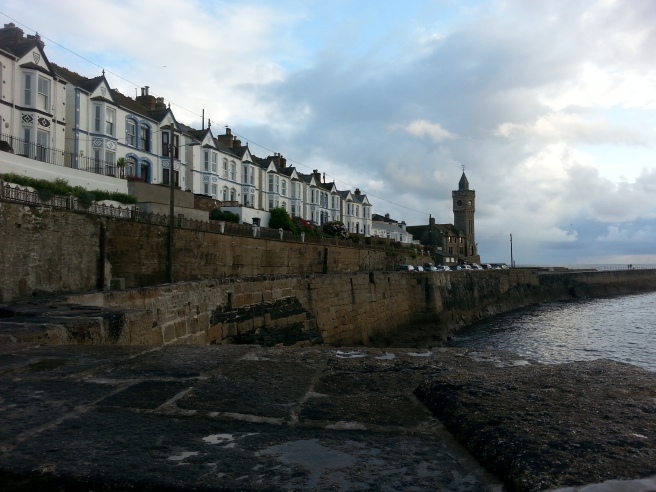 A rainbow provided a nice cap to our walk.

What struck us more than anything was how well looked-after the town was…tidy despite the number of visitors, and great pride obviously taken in restorations. Other towns take note.

We had a nice meal in Kota which is quite famous since Jude Kereama appeared on Great British Menu. But I have to say it seemed to be living on its laurels. No sign of the chef, either literally or metaphorically, not the exciting spicing we had been led to expect, my fish was dry (unforgivable in such a restaurant), and overall underwhelming. 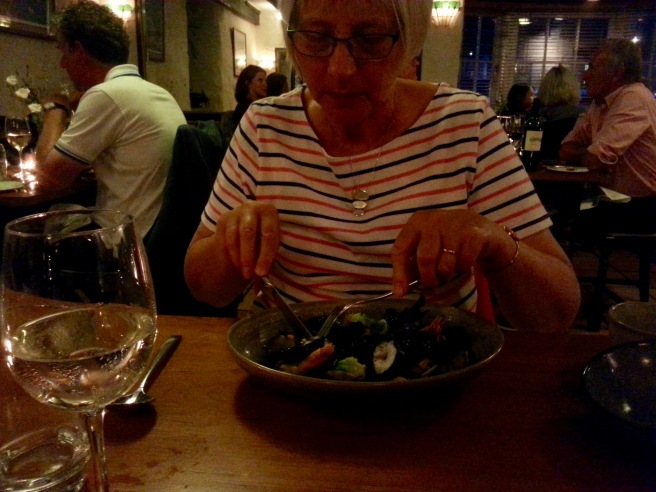 The next day dawned with sunshine and we had a lovely breakfast with exemplary service at Kota Kai the sister cafe. The smoked salmon fillet with scrambled egg which we both had was delicious (smoked on the premises). A quick saunter around Porthleven set us up for the day…..

and it was interesting to see the old lime kiln which had been restored double-handedly by two members of the local history society visible in the photo below…great credit is deserved by people like that.

Anyhow, today we took the bus from Porthleven to Marazion (Porthleven seems to have extremely good bus services), a scenic route seen from the top of the double-decker. We were going to re-visit St Michael’s Mount which we had been to a few years ago and as the causeway was covered by the tides we queued patiently for the ferry. In fact we didn’t wait long at all considering the numbers of people as there were about 8 ferries in constant operation. 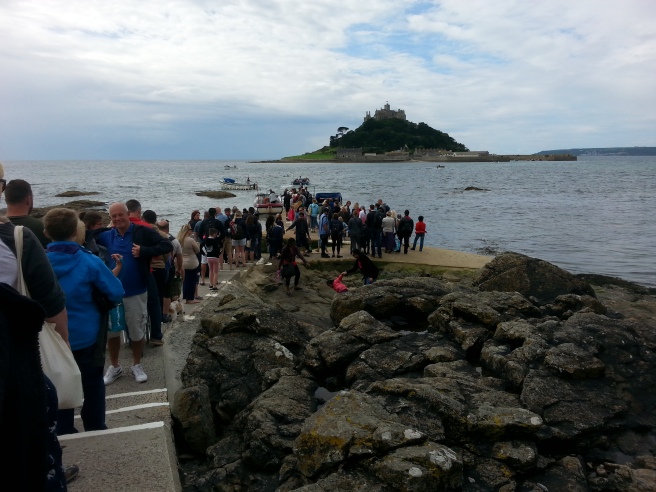 Arriving at the little harbour on the island we had a quick look at the two barges used on formal occasions by the Lords St Aubyn, the same St Aubyns whose crest we see in Hannafore on presumably a holiday house. 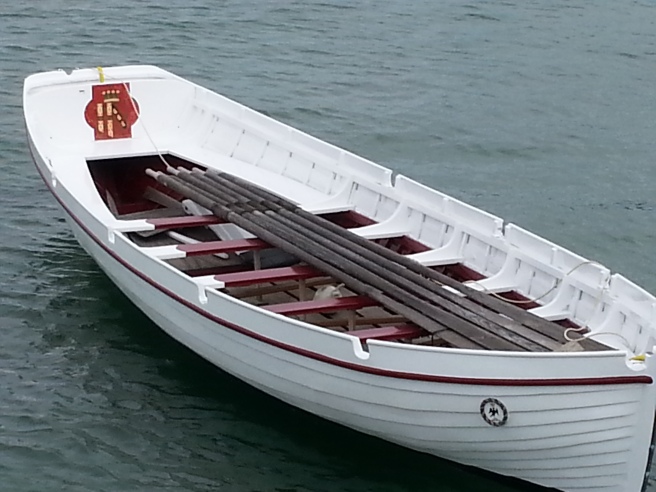 We then made the steep pilgrims’ ascent (no alternative), the abbey/castle looking as if it grows straight out of the rock. 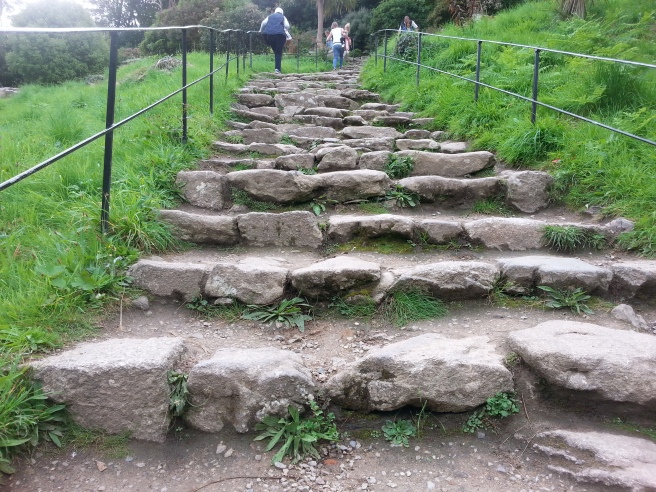 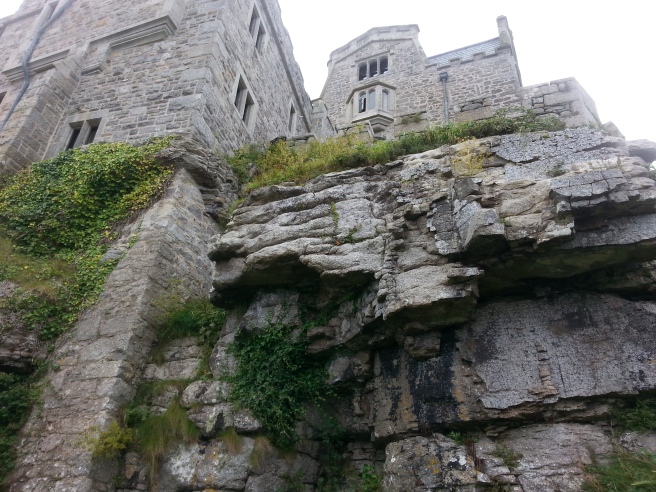 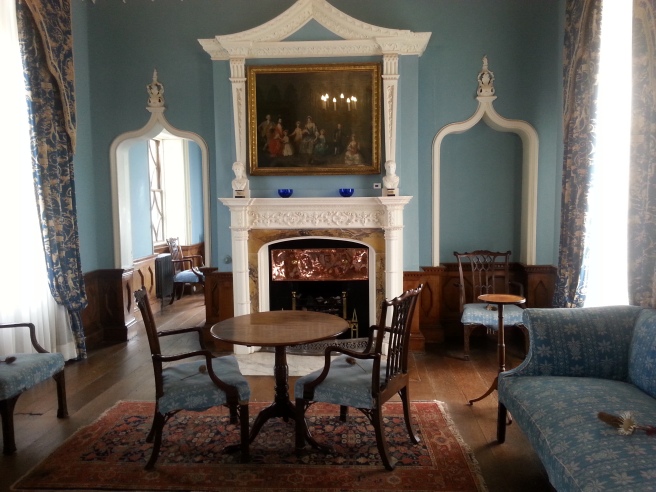 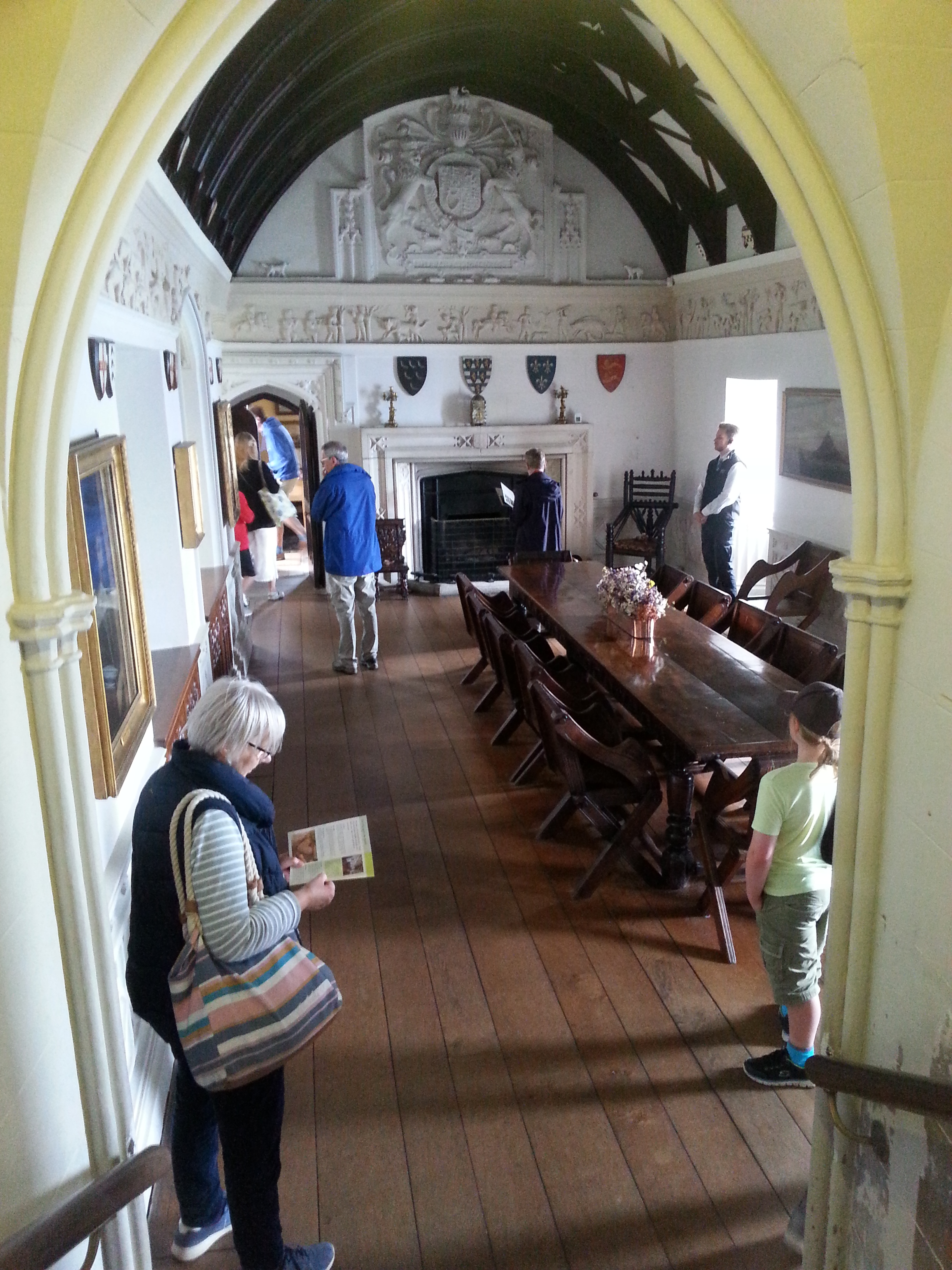 But our biggest surprise was our walk around the gardens afterwards…they were some of the nicest gardens we have seen and all on an inhospitable rocky site. This didn’t stop terracing of all kinds and planting that takes advantage of the fact that the stones act as a kind of radiator getting up to 40 degrees.  The planting was truly astounding and a revelation to us who hadn’t realised this treasure was there… 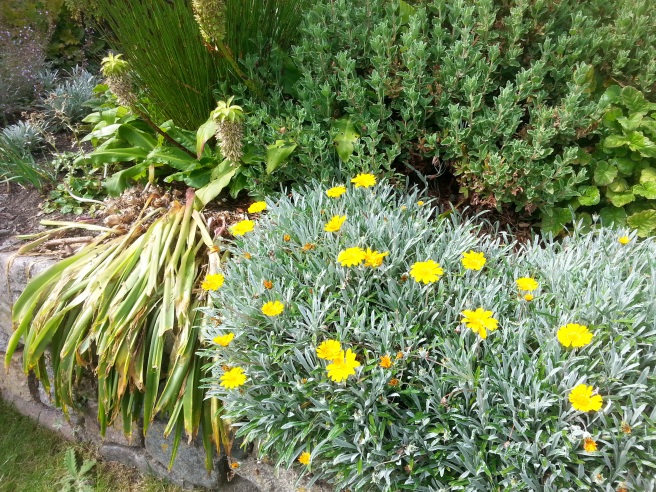 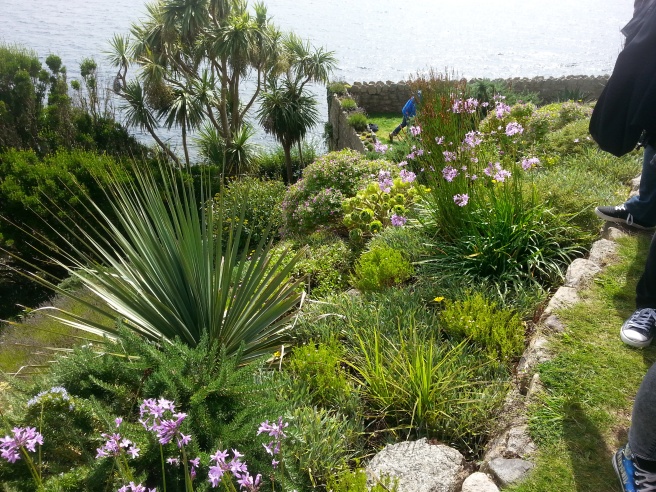 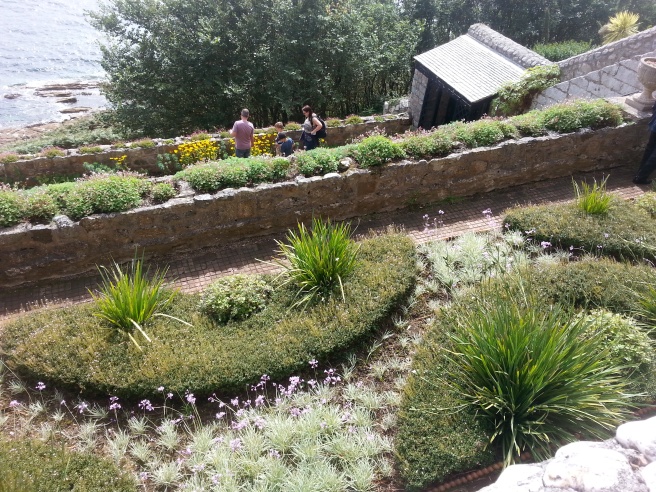 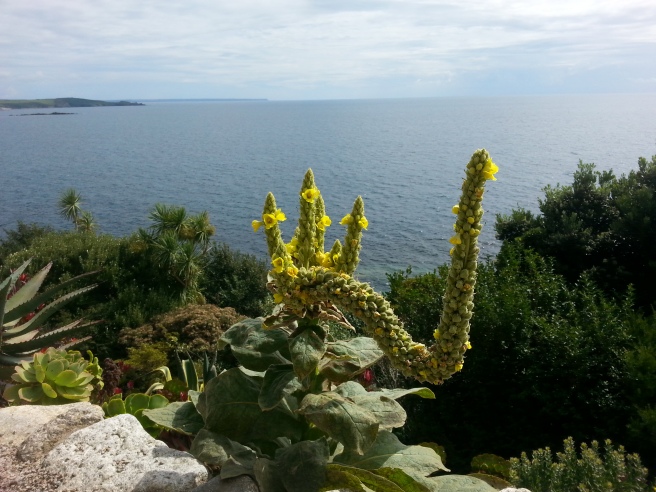 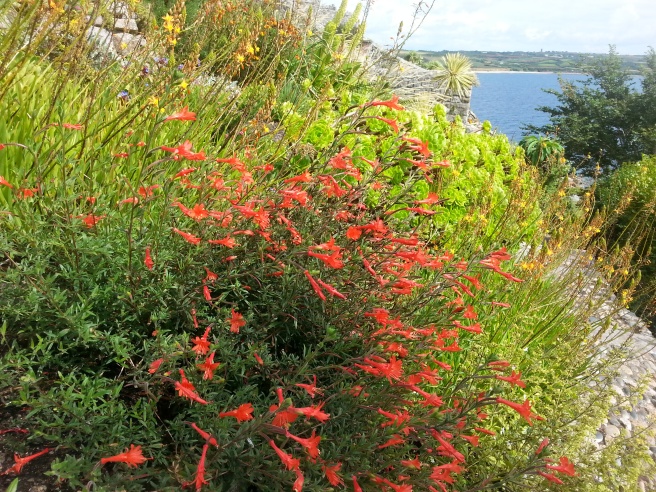 Tiring but very satisfying. Over on the mainland we had a wander around Marazion which is a delightful little town with lots of galleries and restaurants/cafes. We had lunch in the Godolphin Arms which has been refurbished to great effect. We looked out over the view to the Mount, had a decent and reasonably priced lunch and the bedrooms with a view looked great on their literature… 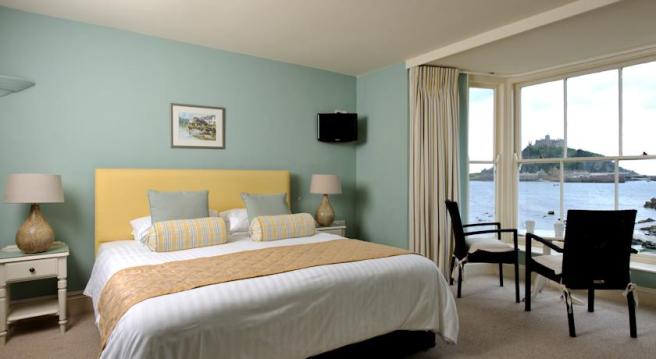 The return to Porthleven by double-decker was a great end to the day….. 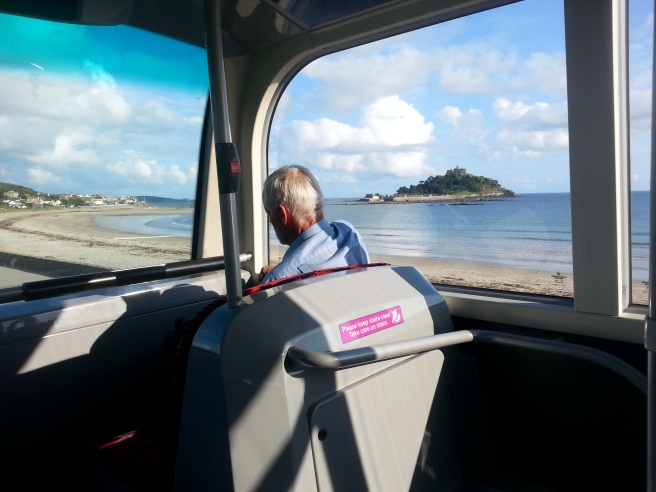 Friday saw us bid farewell to Porthleven, and we wound our way down the Lizard. First stop the beaches near Gunwalloe

We went on a short circular walk on the coastal path at the beginning and were rewarded with fine views across to Porthleven and beyond to Land’s End. 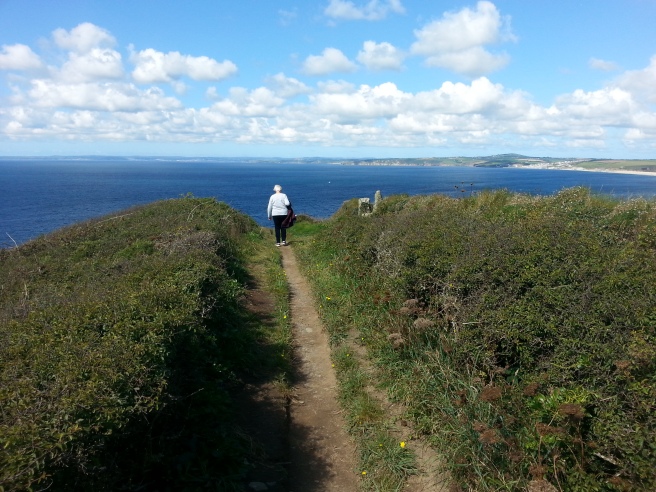 and then we looked around the very historic church dedicated to St Winwalloe. It is built into the dunes and is quite unique. Unusually for us it was about the only church we have been to without any form of written guide. 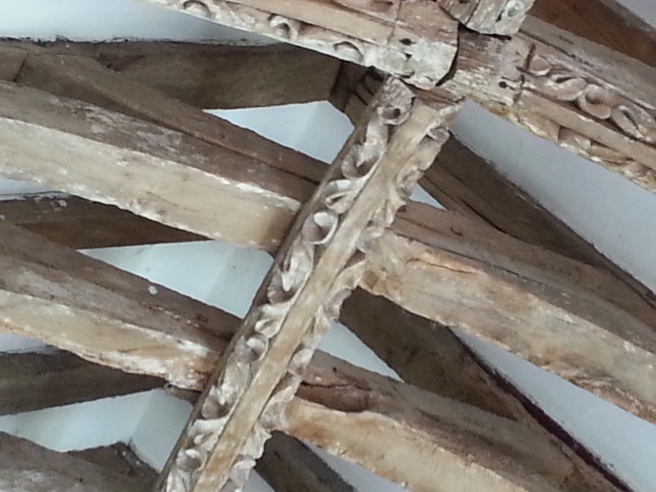 A rood screen, bearing an image of the crucifixion, once divided the church in two with the chancel and north and south chapels lying to the east.  Two complete bays of this screen which once depicted the twelve apostles were recycled as north and south doors to the church, one to be seen here.

One more stop before the drive home was to Kynance Cove very near to the Lizard, which was incredibly busy, and we saw it as the tide was virtually fully in i.e. not at its best. 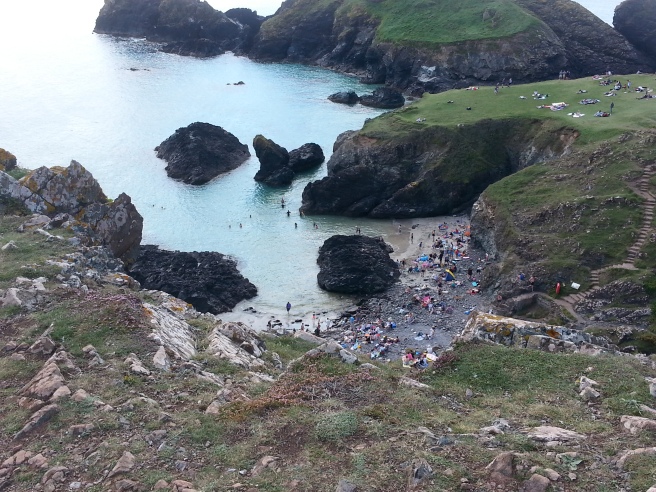 We simply must return early one day outside school holidays when the tide is out! 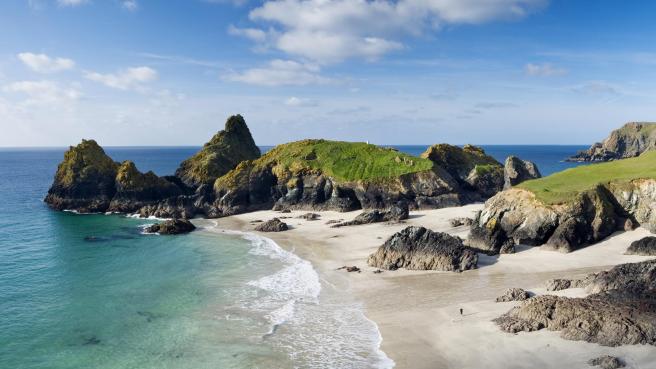 This 2 night trip was something of a holiday for us, and we made the most of it……