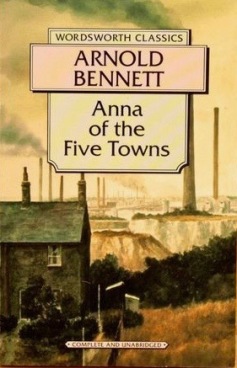 Having read a lot of critiques of this novel, I have come to the conclusion that they are all wrong! Some say that Bennett is pushing the message of the control of Industry over individuals. Nearly all say that it is a story of unrequited love. I beg to differ. What the novel is overwhelmingly about is the oppressive power of religion and social constraints at all levels of society over individuals who happen to exist in an industrial setting. It is also about a young woman Anna who doesn’t really know what she wants from life apart from to escape the dictatorial and stifling clutches of  a domineering father. Anna’s so called ‘unrequited love’ Willie the son of one of her tenants who fail to manage to pay their debts, is the subject of her sympathy rather than her love, an outlet for her ‘do-good’ instincts. Whatever. It is a good read once you get into it. I found it hard to engage at first with the details of the very religious society enforced by the Bursley Weslyan Methodists, but I had patience and it was rewarded. The background of Work and Poverty in late Victorian times is well dealt with and powerful and the personal story of the Tellwright family is full of interest. The denouement is unexpected and shocking and abrupt at the same time and represents an author who knows what he wants. The cover of my Wordsworth edition is amazing is it not….it is a painting of the North Kent landscape. How times have changed!

I love John Mortimer’s Rumpole novels, and when I was at school I always wanted to be a 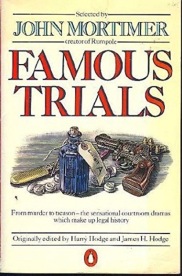 lawyer (although didn’t think I would have the chutzpah to be a barrister, and thought being a solicitor might be too boring). So I tackled this book with relish. The only problem is it is not by John Mortimer, but edited by him, and the write-ups of the various trials are variable…nevertheless as Mortimer says in his introduction ‘high among the great British contributions to work civilisation, the plays of Shakespeare, the herbaceous border and the presumption of innocence, must rank our considerable achievement in having produced most of the best murder trials in the long history of crime’. I do wish he had decided to re-tell the stories himself in his usual comic-serious vein. Nevertheless I did enjoy appreciating the sheer hard work, dedication, and flair that went into bringing people like Dr. Crippen, William Joyce, and many others to justice….