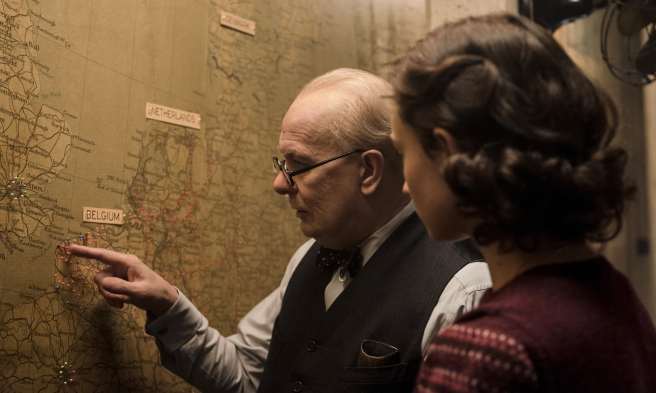 More cinema….this time ‘Darkest Hour’ starring Gary Oldman as Winston Churchill. British production company owned by a big American company, and therefore subject to as much American gloss as any films originating there. I had a bad feeling about this before we went (despite all the glowing reviews, of which there have been many). Rubbish collectors dressed as rubbish collectors with scrupulously clean clothes and bins, obviously just costumes. A Churchill who was portrayed as a drunk scarcely able to do any work or string words together, working with a single secretary. Come off it!! Churchill had strings of secretaries who could scarcely keep with his vast daily output. He was totally on top of his task which demanded superhuman effort, and he took a detailed interest in every aspect of the War as evidenced for instance in his “Action This Day’ memos. And to think that he looked up at the Commons Gallery for reassurance from his – one- secretary, what a travesty. The whole film was a lie and I don’t know how the critics get away with it. They know absolutely nothing. I came away very angry.

That was on the Super Monday at Vue. Glad we only paid £3.99 for the tickets. However we decided on Thursday to go to the Seniors showing which was ‘Film Stars Don’t Die in Liverpool’ a film we both wanted to see. So, after queuing for and getting our free cup of tea and biscuits, we entered the screening and immediately brought the average age of the audience down a little! The film was great, based on a real life story of the famous but ageing Hollywood actress Gloria Graham who by chance hits it off with a very young Liverpudlian. The thing they have most in common is a lust for experiencing things. At its heart though the film is a tragedy as Gloria, although only half of her believes it, is dying of cancer and she wants to be in the bosom of her young friend’s family in Liverpool to die. This has consequences for everyone, but everyone is delightfully and powerfully portrayed including the mother (Julie Walters). Set in sixties Liverpool the background is highly nostalgic and wonderfully shown – in a true realistic way. Everything you would expect from a great English film. How superior this and native Italian and French offerings in particular to anything Hollywood gives out!

The same evening we went to the Devon Rural Archive which is located in the very remote seeming grounds of Shilstone House. It is a fantastic facility with a superb library for instance , and a major ongoing project to do a detailed survey of every manor house and farmhouse, and their outbuildings, (roughly 1000 sites) on the 1765 map of Devon by Benjamin Donn. Brilliant. Every county should be doing this. Their work of which I read some whilst there is incredible, and carried out by qualified historic architects. Anyhow, we were there for an evening talk on the history, art and architecture of Buckfast Abbey. Peter Beacham was the speaker and very good he was too with excellent credentials but a very light touch (which is necessary for these sorts of occasions). We learned a lot and in particular we will view the interior decorations and art with new eyes. Peter reckons the altar, the stations of the cross, the huge golden chandelier, the glasswork is all of the very highest quality….indeed as good as it gets in the twentieth century, a lot of it emanating from one workshop in Germany. After the talk we came upon by chance the Rose and Crown at Yealmpton where we adjourned for a quick pint. A terrific discovery, good ale, real fires, a really good-sounding menu with very reasonable prices, and all in a historic building with lovely gardens. We shall return.