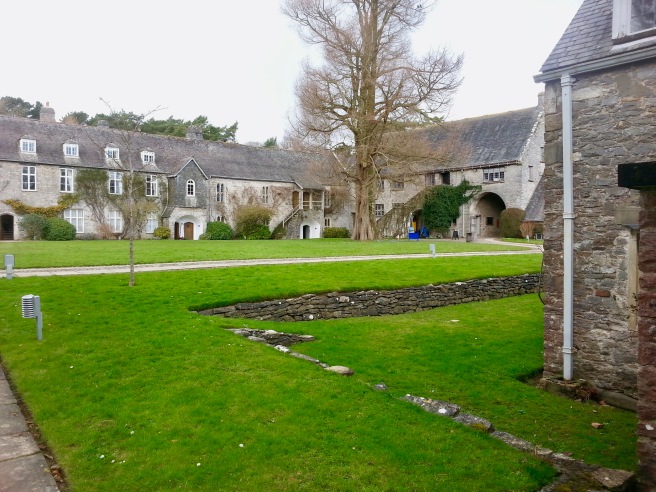 We saw an overnight stay at Dartington Hall advertised on TravelZoo for £59 bed and breakfast. And it coincided with ‘Open House’ at Dartington and a film in their Barn Cinema which we thought would be interesting. So off we went. The first views of Dartington were encouraging, finding the actual ‘hotel’ bit extremely difficult. However, as we entered the courtyard of restored medieval buildings where our room would be located, we got a good feel for this wonderful place…..

and our bedroom and the view from the window were extremely satisfactory. This was £59 for 2 people….ridiculously cheap, as I told Dartington in my feedback.

The best concise description of the importance of this group of medieval buildings and associated famous gardens and parkland are to be found at Historic England. But also do look at the Trust’s own site for details of its development til today. I had thought originally from its layout and setting that this was an ancient monastery but no it was built as a prestigious house in medieval times and altered since. The most recent major input was the work of two philanthropists – the Elmhirsts – who ‘undertook a major programme of restoration under the supervision of William Weir from 1927 to 1938, while at the same time establishing The Dartington Hall Trust in 1932, which promoted experimental approaches to rural reconstruction and progressive education. The Trust was an amalgamation of three specialist Trusts. New buildings were built to accommodate the Trust’s activities, but no overall development plan for the estate was made. At the same period Leonard and Dorothy Elmhirst commissioned designs for the gardens around the Hall from H. Avray Tipping in 1927, followed in 1932-35 by Beatrix Farrand. From 1945 to 1968 Percy Cane advised on the design of the garden. Dorothy Elmhirst recorded the development of the gardens in a series of notebooks from 1943 until her death in 1968. Following the death of Leonard Elmhirst in 1974, Dartington has continued to be administered by The Dartington Hall Trust as a centre for its educational, sociological and artistic activities’.

Anyway after dumping our bags we drove through the grounds which were indeed beautiful, stopping to admire the River Dart, and made our way through Totnes, which is within walking distance of the Hall, to our first planned visit the NT’s Coleton Fishacre House near Dartmouth.

As NT explains..’This country home was built in 1926 for Rupert and Dorothy D’Oyly Carte, who were inspired to make the beautiful valley running down to the sea the site for an elegant Arts and Crafts home. Here they could entertain in style and indulge their passion for the outdoors. You get a real feel for their lifestyle of outdoor pursuits and entertainment as you explore the house; looking out for the wind dial which indicated good sailing weather, and the bell on the side of the house which could be rung to call the family in from the cove at the bottom of the garden at meal times…..’ First impressions were that it was indeed a beautiful house in a wonderful setting…. 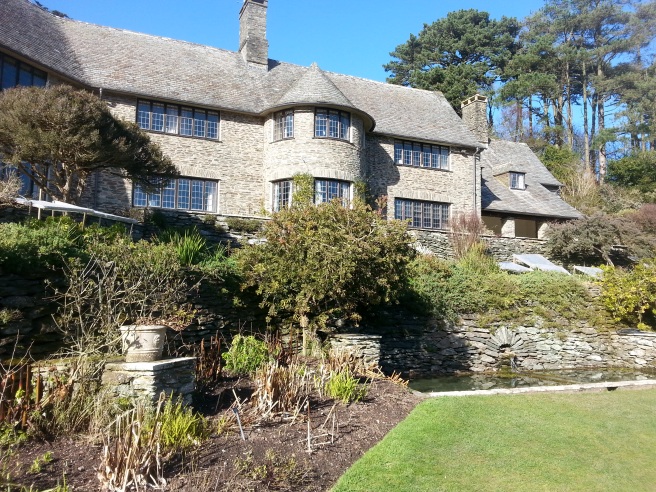 but the first priority was a cup of tea and light lunch…. 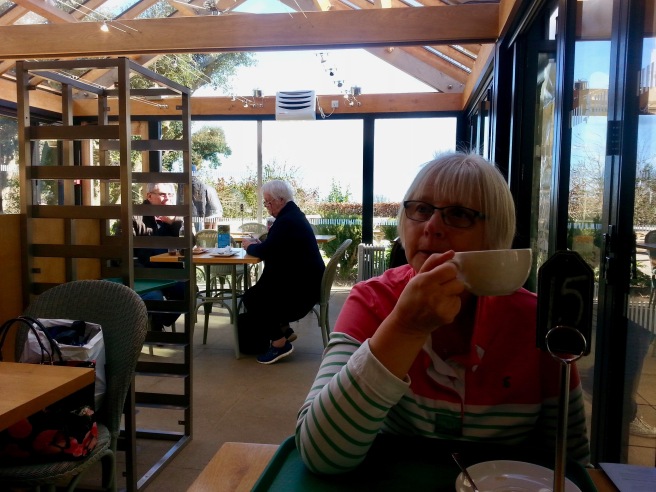 the view from the cafe and patio was pretty amazing… 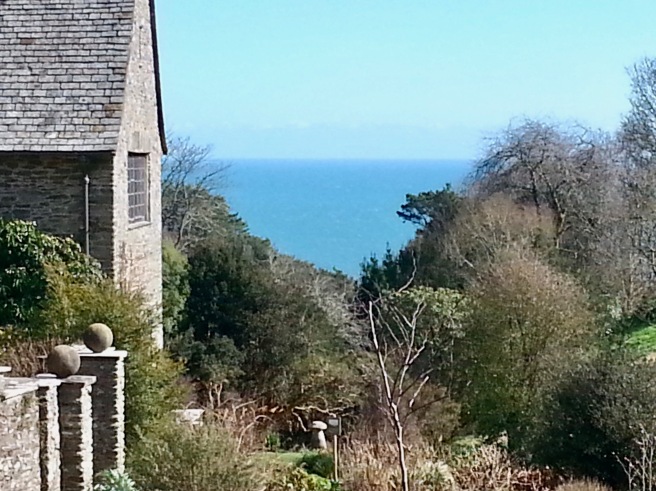 and this continued in every room in the house…. 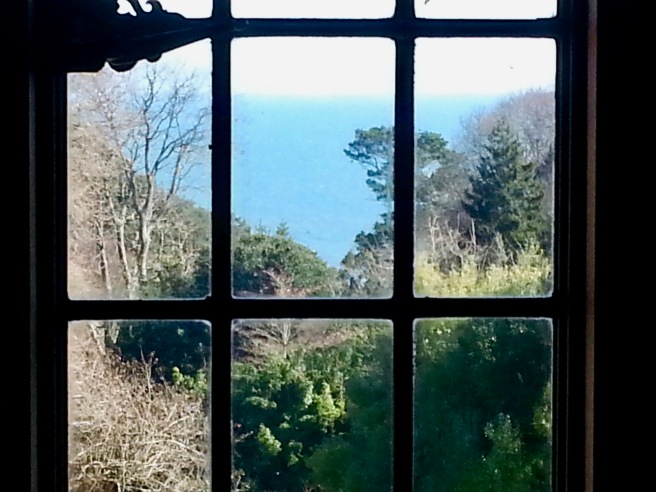 Coleton was full of interest inside – from the family’s accoutrements… 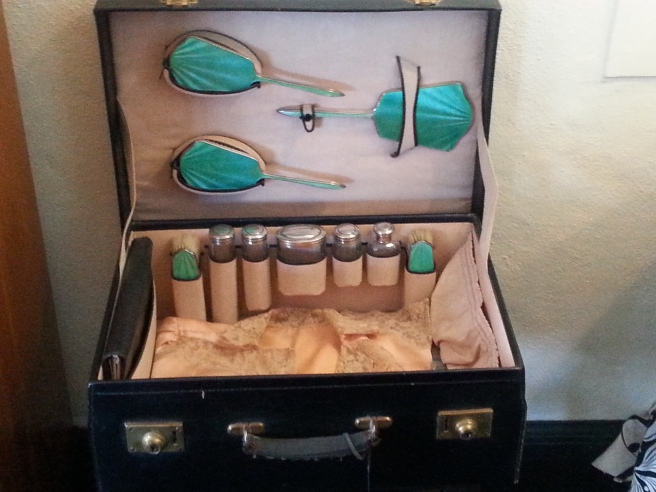 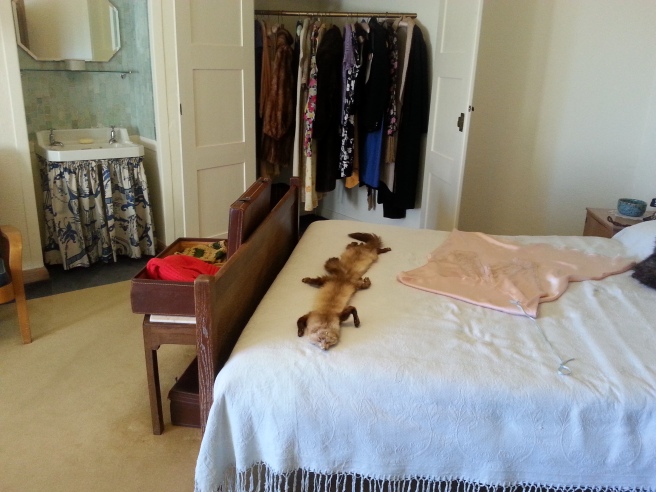 with fabulous views of the gardens…..

There was, as is becoming more common, a dressing-up room….this time with 20’s and 30’s bits and pieces (quite fetching) 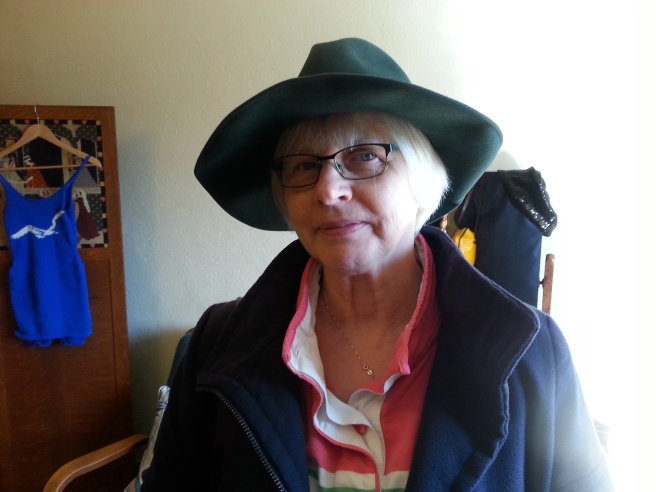 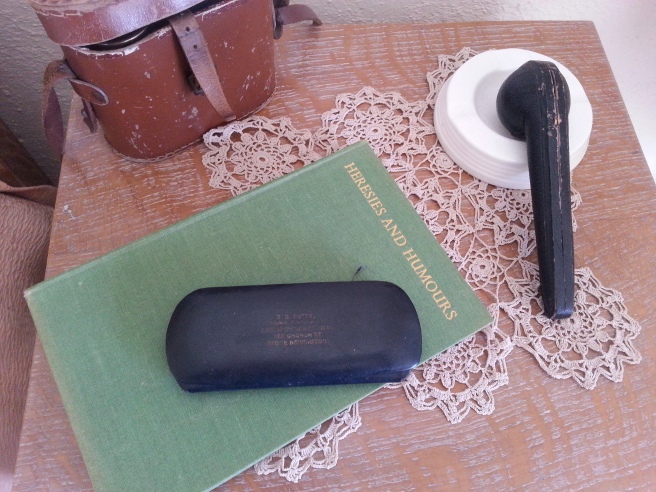 The ‘downstairs’ operation was not as unprepossessing as at a lot of the grander homes, and indeed the maids and butler’s quarters were very nice..they still had lots of work though…..

but towards the end of the tour were my two or three favourite rooms…..the library 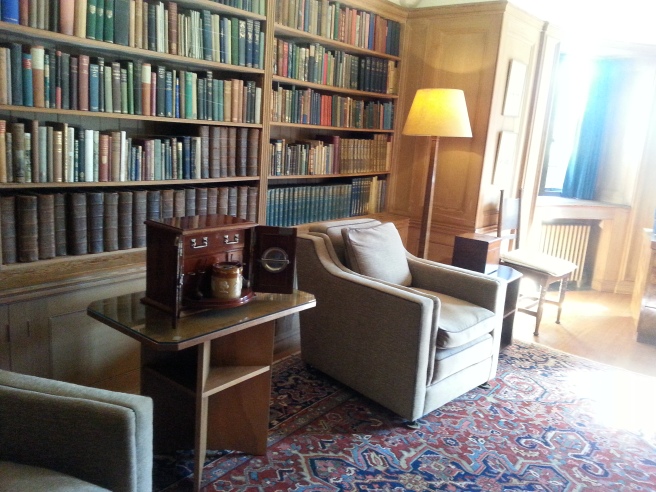 with its very fancy wind dial

and the living room where cocktails await, or if you really must….. 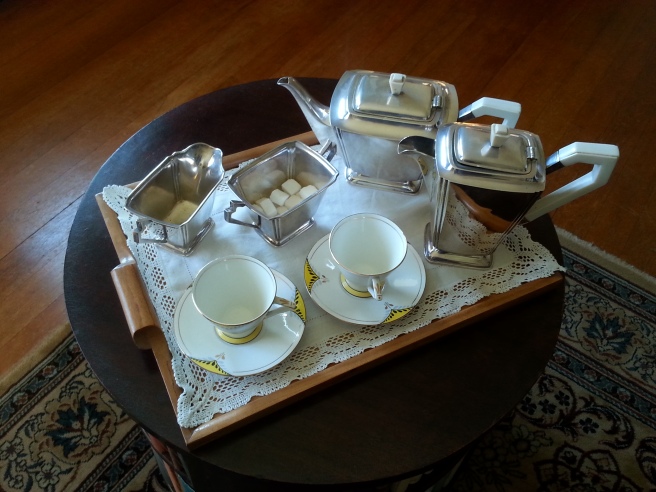 and immediately off the dining room was the outside loggia where the family preferred to eat whenever possible…sheltered, airy, and with lovely views of the gardens…. 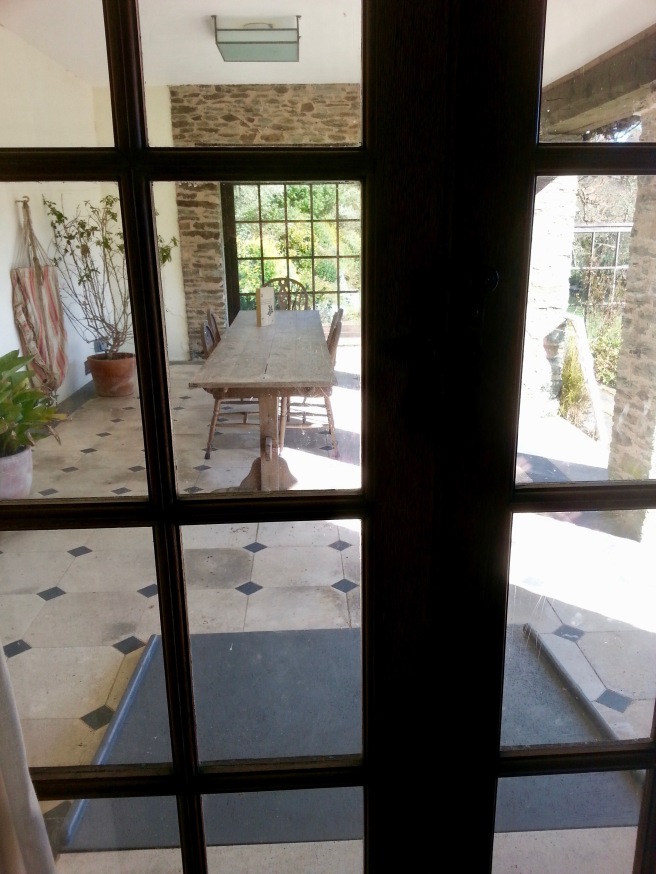 there were also some handsome paintings…all in all, a terrific experience.

But as it was such a nice day we had the further delight of a stroll through the gardens, via the Summer House and formal areas…..

to the viewpoint at the end of the estate….magnificent.

I really must mention how friendly and helpful all the staff were…this year wherever we have been this has been so. I therefore imagine they have all been on a customer service course, who knows?

Our next move was back to Dartington where we had a dinner booked in what they call ‘The White Hart’ Inn, which is actually  part of the restored range of buildings. It is a very very impressive place indeed…I would go so far as to say it is the highest-roofed hall building I have ever seen with the thickest walls, plus enormous fireplaces.

Unfortunately on this occasion the meal wasn’t up to scratch. However,  the film afterwards in The Barn Cinema, another restored building and part of the complex, in reality a fifteenth century barn, was very interesting. It told of the other side of Hedy Lamarr. As well as being ‘the Bombshell of Hollywood’, the most beautiful woman in the world, she was an inveterate experimenter and inventor. Of the reviews I have read that of ‘The Independent’ is the best…..do read it to find out how what she invented – a frequency-hopping system – was used by the American Military and actually became the basis for Bluetooth and wifi and other developments, now the supposed foundation of the modern world! It is an astonishing story. She received no credit until she was more or less on her deathbed…..because she was a glamorous, and controlled, American film star. 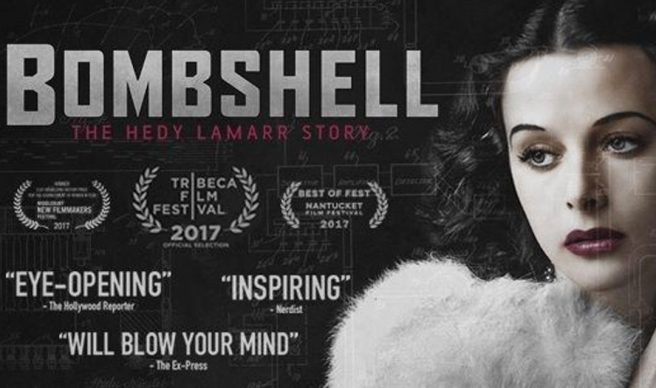 Breakfast next morning was in The White Hart and it was superb. After that we had a look in the Great Hall which was closed for an event but we sneaked in anyhow, and this was even more impressive than ‘The White Hart’ and its screen corridors were very atmospheric. 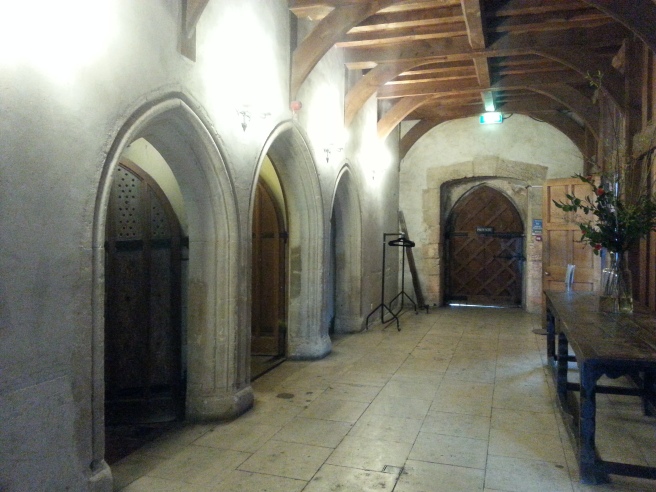 It was really quite wet today but we didn’t let that put us off visiting the gardens which are such a feature of Dartington and we had quite a long chat with the only other person we met who had been to school here and remembered brilliant performances in the outdoor amphitheatre….

There were some famous statues including this Henry Moore, so we enjoyed our little tour despite the conditions. 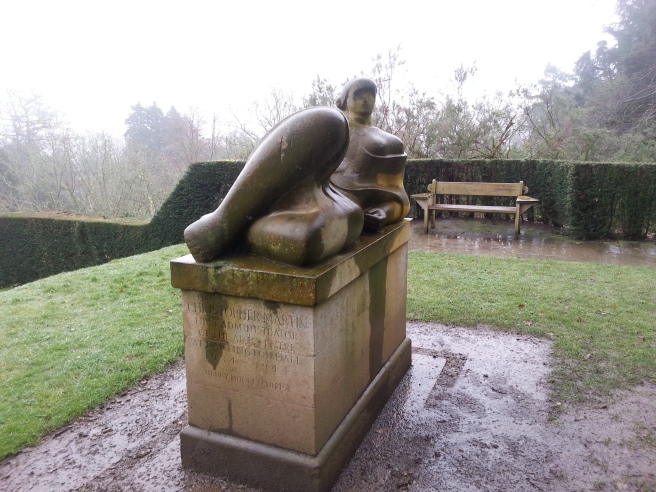 Next stop was Agatha Christie’s holiday home ‘Greenway’. Located on the River Dart normally you would want to explore the gardens here, but as it never stopped pouring down we were satisfied with the house interior. 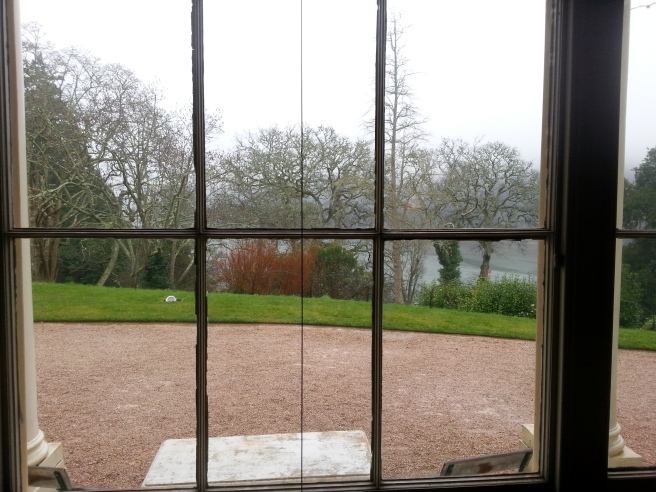 All very interesting, but everywhere gloomy I thought. Mind you I think half of that was  down to the weather conditions. Very friendly guides again – must have been on the same course!

I particularly liked some of the paintings of Agatha’s husband Max, the archaeologist, which gave a real feel for the man. 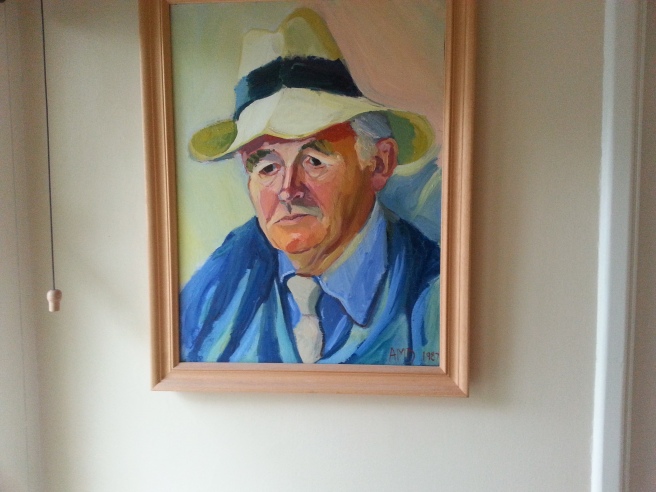 anyway, here from the NT site, is what it’s like on a nice day! Much better…..

I forgot to mention we had an extensive look round the exhibition that was on at Dartington about the Trust’s future. The big trouble was it was thick with a mixture of management-speak of the worst kind and Totnes-influenced flower-power of the hugging a tree variety, a strange mixture indeed. It was all much too airy-fairy for me. I’d certainly do things differently. I don’t think I’ll be asked. Nowhere at the exhibition or on the website for you to give your feedback…..I wonder why?