Until 1914, the gentry owned half the land in England; now the figure is less than one per cent. This very readable history concentrates on fourteen gentry families, from 1400 to the present day, and tells their tale and through them the tale of England and of course the rise and fall of the gentry itself.

In Europe, the tendency was for great lords on the one hand and peasants on the other to be the regional norm. Indeed holidaying in the sixties one was still conscious of a peasant class in France Spain, Italy…..pretty amazing to my mind. Here the peculiarly English class of the Gentry tended to soften society hierarchies and provided a certain stability. Respectability, an attachment to the land, and no great self-regard were their typical traits. And in England we haven’t referred to a peasant class for many centuries. But the gentry was never a rigid part of society….it added a certain flexibility. You could enter the class, and you could drop away from it with with surprising ease.

Of great interest to me one of the families described is the Oglanders who lived on the Isle of Wight. Adam tells the story of Sir John Oglander in the Seventeenth Century. In one sense it was he who got me into Oxford – as Sir John was held up in the vitriolic academic debate in the Sixties as an example of Nouveau Riche who supposedly were the group who were a major factor in bringing about the Civil War. Through some elementary research I showed that this was not so – he was part of the established Gentry. My History Master was impressed and wrote to his old tutor at St John’s about it. I got into St John’s. Anyhow, purely an aside that brought back memories of my sheer enjoyment of studying History at Manchester Grammar. One of the abiding images in the book is of Sir John riding his lands each morning and evening and glancing across to the mainland and be thankful that he did not have to go there…as he said of his family and his friends, going to London “thynkynge it a East India voyage, they always made their wills”. I know the feeling!!

The families described rose, fell, duelled, bought lands, worried about survival, took mistresses, were undone by lawyers and had many family quarrels and they are ever fascinating. As time went on, dirty commerce played an increasing role in their finances, and how. Eliza Pinckney, determined and devoted mistress of estates on both sides of the Atlantic in the 18th century had a fascinating story (and indeed women played a huge part in these histories. “Yet we’re brought up short at the end of her story with a reminder of the building blocks upon which her success in life was based: a simple long list of her family’s slaves. It’s salutary that Adam commemorates all 326 of them, including the inhumanly named “Muddy” and “Lazy”.

All in all a memorable addition to the historiography of our nation, which has an easy style and brigs History to life. I really enjoyed it. 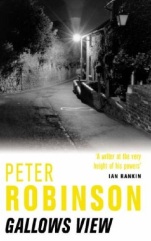 View’.  Although old-fashioned (it smacks very much of the Eighties when it was written, if not the Seventies), it is a well-crafted Crime novel. The main characters at least are well delineated and the setting is wonderful….a Yorkshire town based fairly obviously on Richmond. This is the first in the Inspector Banks novels. DI Banks has recently moved from London to the provinces to escape the stresses of the Capital. Little does he know what awaits him! A Peeping Tom, a murder, robberies, and his attraction to the young psychologist assigned to the case all add to the mix. A page-turner and very entertaining. Must read more in the series.