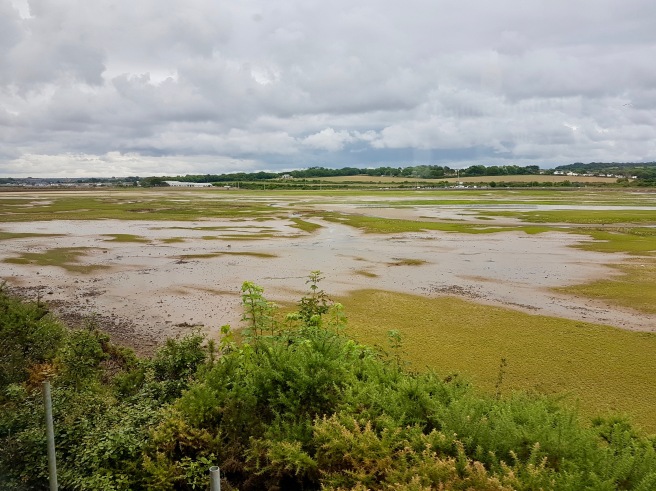 The view from the windows of the train on the St Ives line is always a joy but, when the tide is out, Lelant Saltings doesn’t look quite so prepossessing…..nevertheless, and despite it being a grey day, as soon as you see the bay you are cheered up straightaway.

And the sea at St Ives always has a magical quality and colour..

We were here today to visit the Tate and Barbara Hepworth’s Museum (you get a joint ticket…half price for us with our National Art Pass). On our walk in from the station we saw the Parish Church open for the first time, so in we went, curious as to what we might find. It is dedicated to Saint Ia of Cornwall, a 5th- or 6th-century Irish saint, and is a Grade I listed building. “The current building dates to the reign of King Henry V of England. It became a parish church in 1826. It was built between 1410 and 1434 as a chapel of ease: St Ives being within the parish of Lelant. The tower is of granite and of four stages (over 80 ft high): the church is large but not particularly high and built in a Devonian rather than a Cornish style. An outer south aisle was added by the Trenwith family about 1500: this is now the Lady Chapel and contains a statue by Barbara Hepworth.” This was very beautiful and poignant, carved as it was in memory of her son Paul who was killed whilst serving with the RAF in 1953. The font is of granite and probably of the 15th century. It is carved with four angels holding shields. The pillars are made from sandstone possibly from Godrevy across the bay, and allowed for more decorative carving than if they had been the more usual granite. You might just see that they tend to lean outwards and this is probably because of subsidence….the alternative put forward is that they symbolise the sides of a boat. That seems a better story!

There are bench ends of the standard design and also two complete benches in the chancel. Very finely carved they are too…here is one of them. There is a brass to a member of the Trenwith family, 1463, and a monument to the Hitchens family by Garland & Fieldwick, 1815. 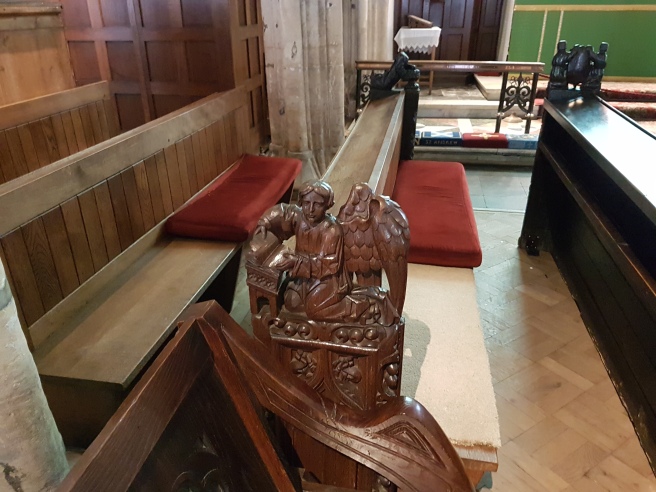 As we left the church and walked through St Ives there were flowers everywhere including a Cornish favourite of mine (tho not of Frances…..) – agapanthus.

Walking across the higher end of town, you always get more of a feel for the old fishing port it once was….

Next stop the Porthmeor Beach Cafe

and then just a hop across the road to The Tate.….views everywhere in the museum are fantastic, whether outside or climbing the stairs..

This, a second viewing for us, was not as memorable as the first – obviously, but we were able to take in things and paintings which we hadn’t been able to look at in any depth the first time round. One of the first striking paintings you see is this abstract by Patrick Heron..

and the famous Modernist painters of St Ives keep on coming – all mixed with fascinating display cabinets with correspondence between the artists, brochures, catalogues etc 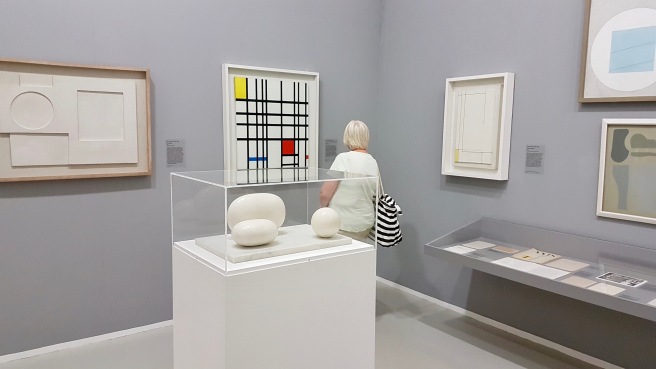 I liked these two by William Scott – the first Mackerel On A Plate and then the second The Harbour which must surely echo the first in its composition. 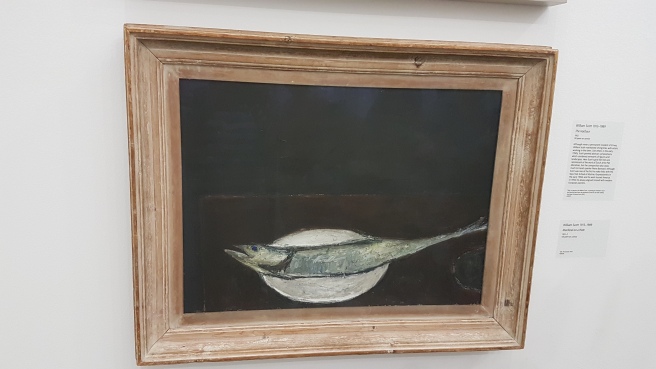 One thing we couldn’t understand was that this Matisse you could go up to, examine the brushwork, and virtually touch, whereas elsewhere in the displays you were kept back by a cordon. I don’t think I would want anyone touching my Matisse! 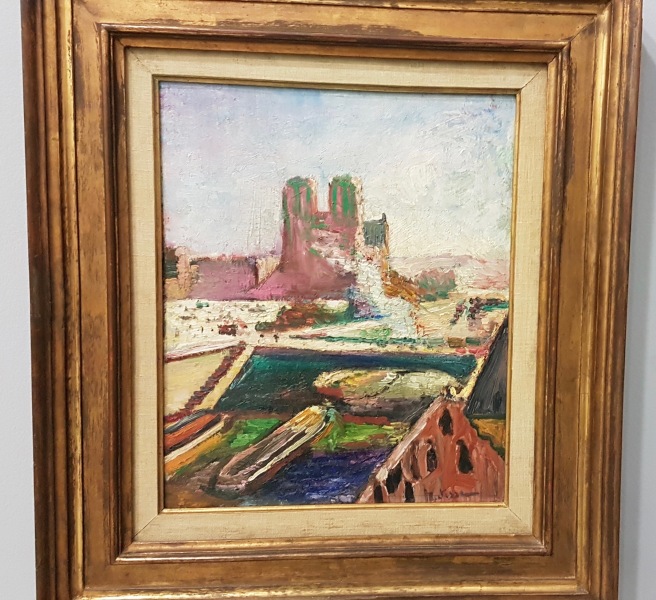 I love Snow On Exmoor by J A Park… 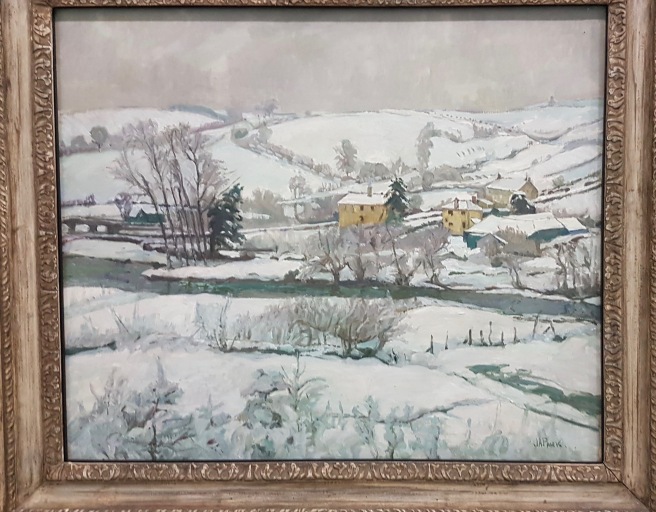 and in the adjoining cabinet some newspaper clippings of him painting…. 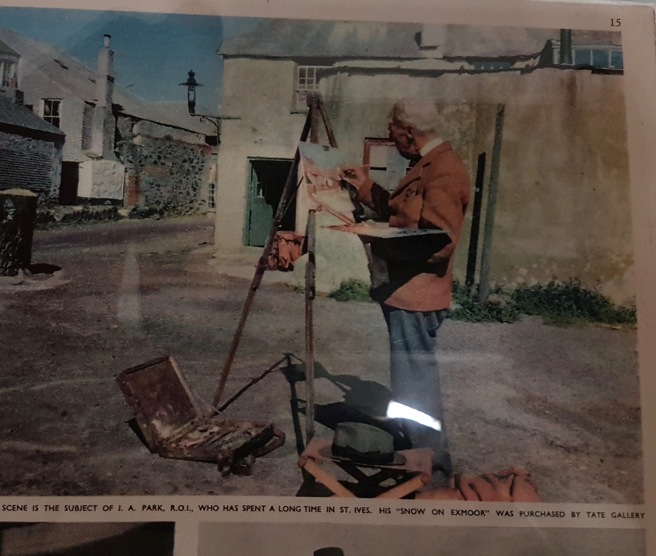 There was a special exhibition this time, a retrospective of Patrick Heron…..

and then a little alcove where you could view the life story of Barbara Hepworth and film of her working with interesting commentary….

The last but one gallery gives out onto the entrance foyer…..

and there we were taken with the detail of polished metal cladding positioned to reflect the world outside….

A short walk would take us to our next stop, but the route was not without its distractions…

So at last the Hepworth Museum and Gardens. First some of her work seen indoors

but then the beautiful bit, being in her garden with her magnificent sculptures.. 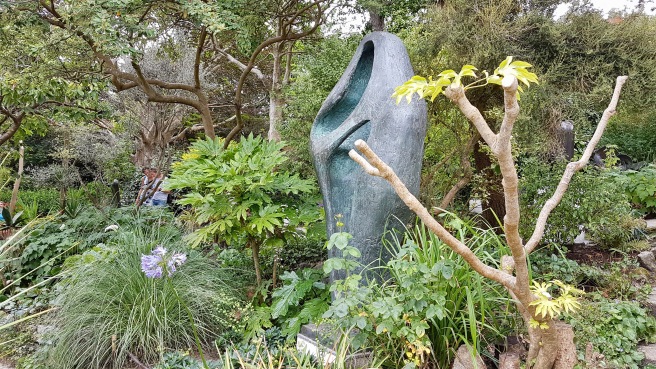 and seeing the raw bits of granite from which she created her masterpieces…and the covered patio areas and conservatory where she worked, and her coats and tools just as though she had put them down five minutes ago.. 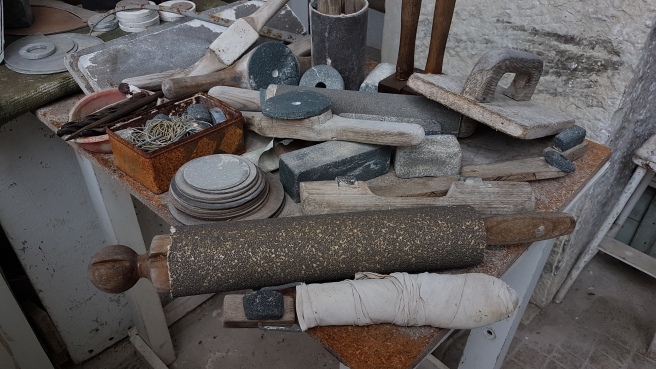 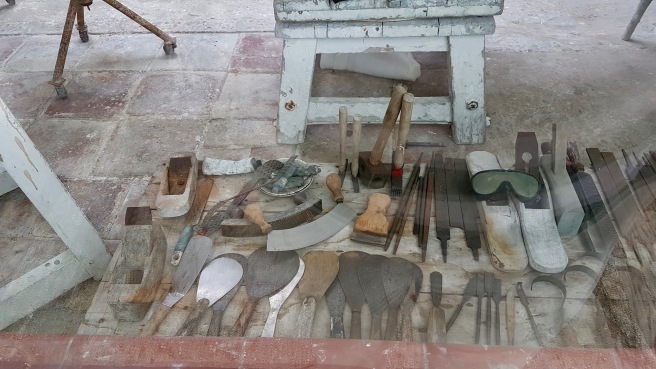 It was a fascinating insight into the working life of one of our great Artists, oh and by the way there was even a little outhouse with her simple bed in it….much needed I am sure, after toiling at shaping granite and marble! 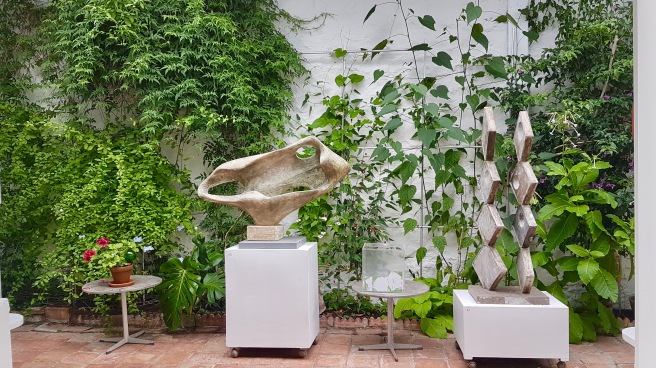 On the way back to the station we called at the St Ives Harbour Hotel beautiful location, very boutiquey, and a good-looking menu…. a pleasant interlude whilst waiting for the train…..and the walk down through the hotel’s gardens was much better than trudging through the station car park!

These white agapanthus were terrific… 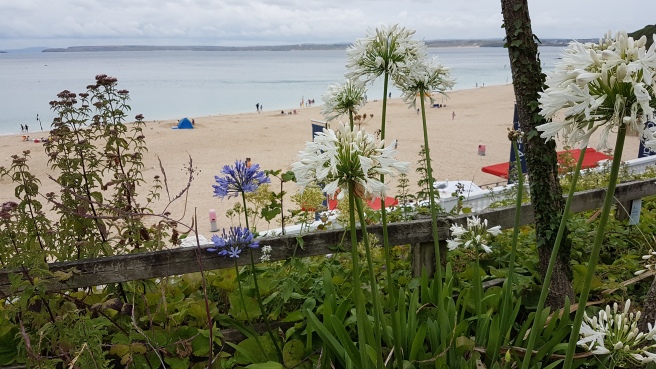 So now we know, if we have friends or family visit, a trip to the Tate and to the Barbara Hepworth museum will be well worthwhile….