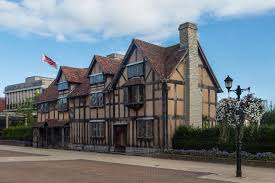 We used our free Times+ cinema tickets to go to the cinema at Stratford to see ‘Black Souls’. First of all, it is always a privilege to visit Stratford-upon-Avon – such a marvellously historic town full of everything you could possibly need including the world-class theatre of course, but considering its huge influx of visitors, relatively unspoilt. And the Picturehouse is a good cinema, two screens, a bar/cafe , and outside 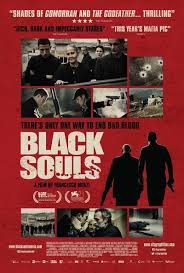 terrace. ‘Black Souls’ is a MUST SEE (my son tells me I shouldn’t capitalise like this, but I can’t help it just here). Although we missed the first 15 minutes due to a printed error on The Times’s site, it mattered not. It is gripping, frightening, film at its best. Nothing at all like the usual Hollywood crime blockbusters, and much the better for that. Based on real-life events (which thought is very scary indeed) it is about vendetta-style recriminations closing in on the Carbone clan, goat farmers who have diversified into the riskier and more profitable business of drug-dealing.The film focuses on the differences of character between the Carbone brothers: Luigi , the hard man out in the field; urbane Rocco ( who lives a seemingly respectable bourgeois lifestyle in Milan); and older brother Luciano, who’d rather tend his herd than continue the old cycle of bloodshed. But when Luciano’s tearaway son makes a rebellious gesture, matters move inexorably towards an outcome that is visceral and surprising. You know immediately that this is filmed by a FrancoItalian company, the quality of direction and the atmosphere are superb and the director feels no need for gratuitous violence but at the same time leaves us on edge and fearful all the way through. Both setting and action are darkly brooding. It’s a while since we had been to the cinema but we must get back into the habit again. Seeing a film at the cinema is such a direct experience as you are focused totally on the screen and committed to the film as there are no background distractions as there are at home. It is full immersion, and we were reminded seeing ‘Black Souls’ that watching a film on TV at home is not a patch on it.