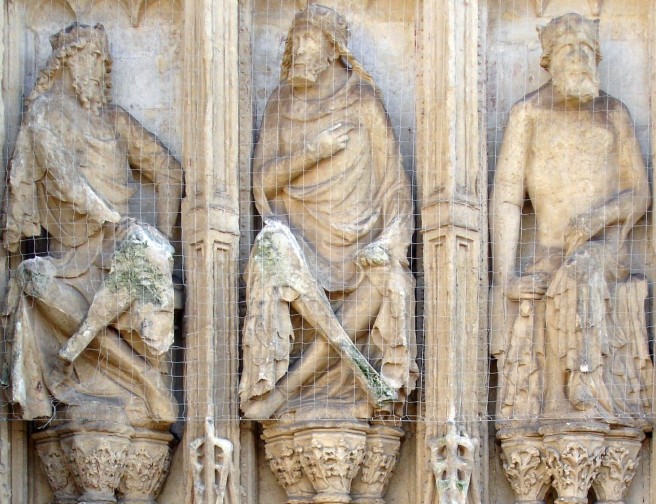 We decided to visit Exeter today being as it has the only John Lewis in these parts and we wanted to source various things. Once at the city, we travelled in on the excellent Park and Ride (free for us) and had a quick look around the outside of the magnificent cathedral, which we have visited before, being amazed again by the stupendous West Front. Here is what the official cathedral site says….”The West Front Image Screen of Exeter Cathedral is one of the great architectural features of Medieval England.  The addition of the image screen around 1340 marked the completion the re‑building of the cathedral in the Gothic style.  Work continued on the screen with the additional top tier completed about 1470. Behind the screen, to the right of the Great West Door is the burial chapel of John Grandisson who died in 1369 after more than 40 years as Bishop of Exeter. The screen is covered in a wealth of carving, dominated by three rows of statues in niches.  At the bottom are angels appearing to support all the figures above.  Most of the figures of the middle row represent Kings of Judah. In the upper row, to right of centre, is a representation of God.  On His right hand would have been a seated figure of the Blessed Virgin Mary.  Her image was destroyed in the Reformation and, later, mistakenly replaced by King Richard II.  Also in the upper row are figures of the Apostles, the Evangelists and Old Testament Prophets. Dozens of figures also peer out from the battlements above and the whole screen is decorated with plants and animals. Originally, the image screen was entirely coloured and must have made a convincing vision of heaven.”

Having lunched in the top floor restaurant at JLP looking out over the city roof tops and being over-warmed by the splendid sun, and having shopped, we then had a look round the rest of the central shopping area.

We found everything we wanted and noted the excellent use of many historic buildings. Exeter deserves a medal for the way it has really looked after its historic centre…busy but unspoilt and full of character. Very reminiscent of Chester. We look forward to a return visit.