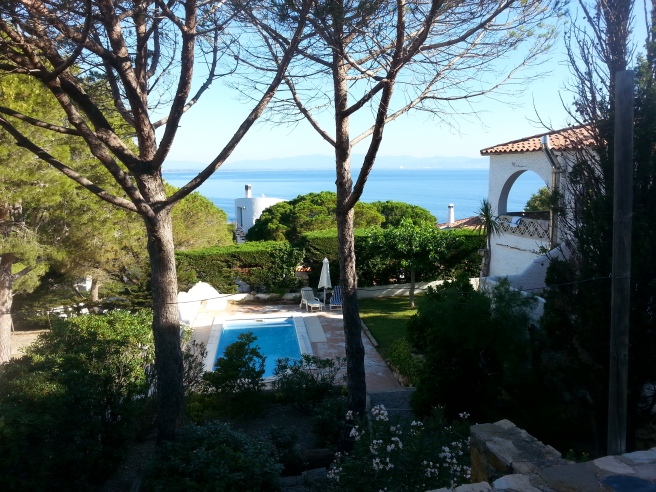 Three weeks more or less at our house on Punta Montgo which is on the Northern end of the Costa Brava Spain, and near L’escala. Last year the Daily Telegraph had a good article showing some of the highlights of the region with all of which we are well familiar. These days I am more relaxed and more content to hang around the house and pool, but since the

whole family were there at different times there was plenty that we did do. One pleasant task was to take the numerous steps down to the beach each morning to buy fresh croissants and pastries – always a big thing for me. And the Montgo bay is very pleasant, as well as 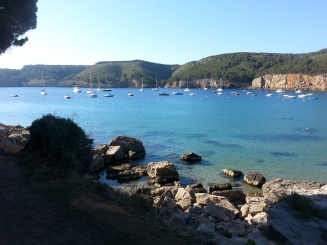 being an important nature reserve.

The walk into L’escala is great now as it goes along the cliffs previously and until very recently in fact occupied  by the Army. Half way is the busy resort of Riells (crowded beach, many shops and several ‘pollo a’laste’ outlets). After Riells there is a lovely walk along a promenade shaded by olive trees into L’escala itself……the statues of the sardanas band are rather good.

This time F’s sister Judy took us up one of the Pyrennean mountains via a long, long, long switchback road to visit a medieval monastery with accompanying restaurant….unfortunately we went on the one day it was closed! However we were a bit better off than the group of English cyclists who had wound their way laboriously to the summit expecting to find supplies of water on arrival……there was nothing. At least their run down the mountain would be quick! What magnificent views we had despite the disappointment. On the way back we lunched at a restaurant on the side of Lake Banyoles and then visited the twelfth century Romaneque Church of Santa Maria de Porqueres which was very atmospheric.

We have always been to Can Miguel’s restaurant at Montgo. This time we went more than once to the concession who operated the area outside the hotel around the swimming pool which they have made very swish indeed….great cocktails, good food, and reasonable prices. Our granddaughter Aiisha wanted to remain behind dark glasses when there… 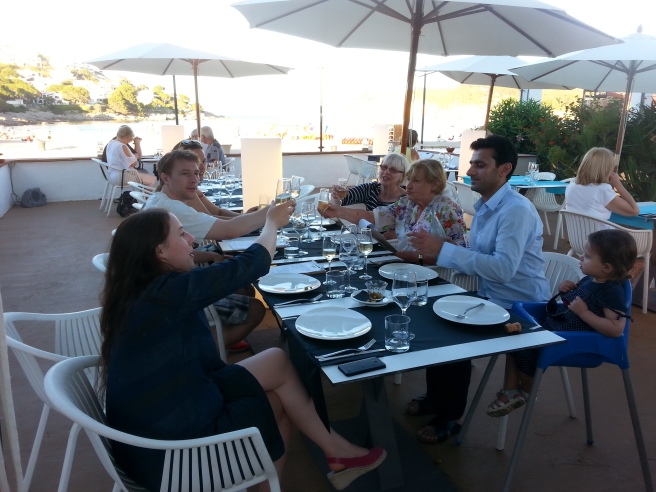 Brava coast to L’Estartit, passing the Montgo peninsula and looking out for our house on the way. The glass bottom was great for seeing shoals of fish, and the coast was almost totally unspoilt (just as the whole Costa used to be!). The boat could get a move on when it suited. 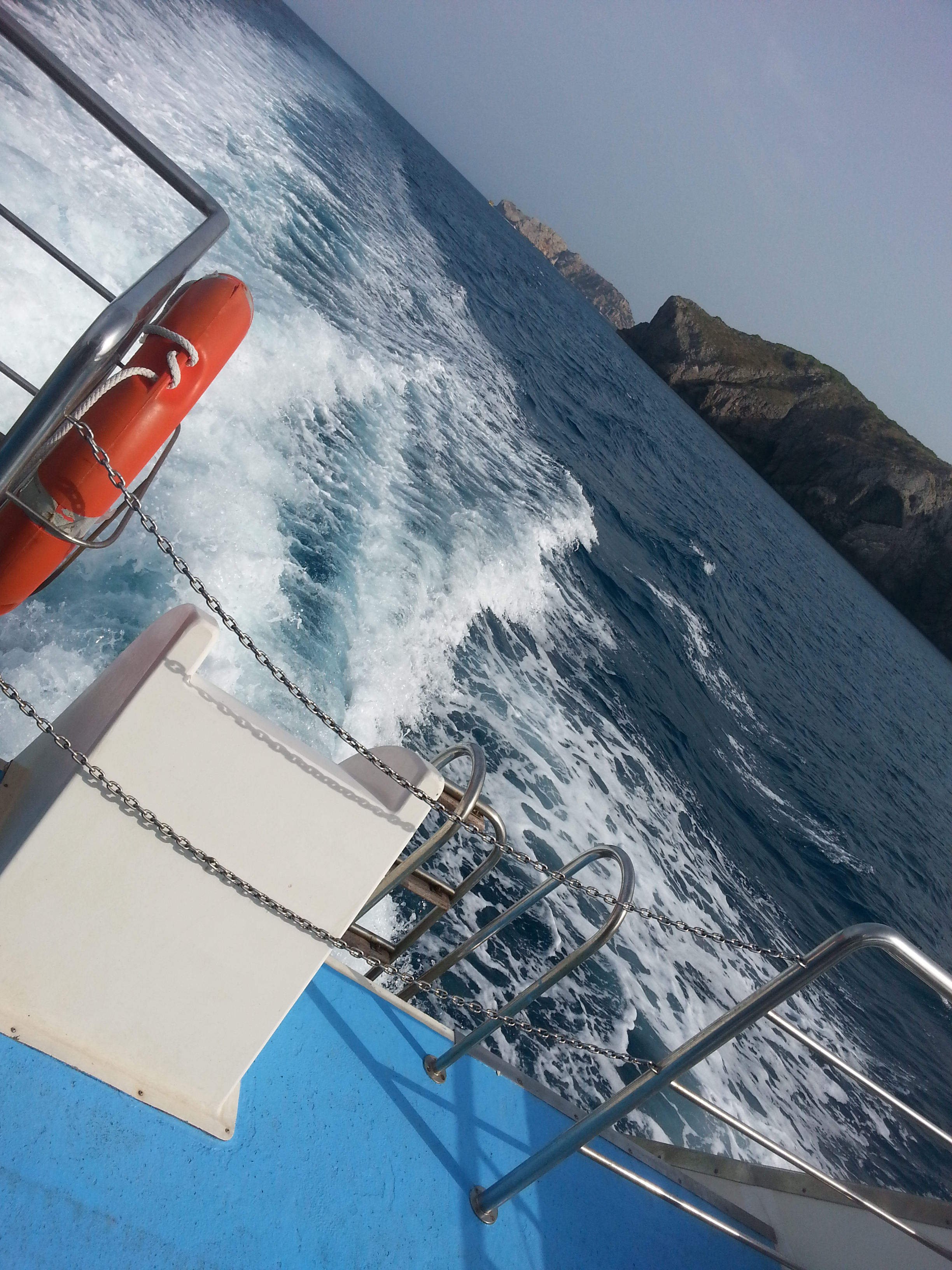 L’escala itself has lots of interest apart from the usual touristy things. We love to go to the 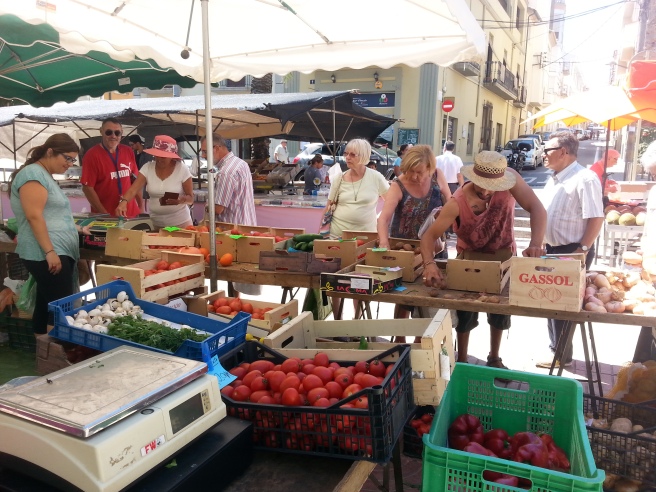 local market, and some of the side streets are full of old fishermen’s houses (one of which Judy and Tino improved to make it the fantastic house it is today. The bougainvilleas are quite spectacular at this time of year although we have never been able to grow one

ourselves at the house in Montgo. Another day was spent walking to Sant Marti for lunch, a beautiful tarted-up medieval village, and exploring again the fantastic Greek and Roman ruins at Empurias. These are of tremendous interest and very extensive although, despite that, only a tiny fraction of the archaeology has yet been revealed. It was founded by the Greeks as a market location (Empurion), and then the Romans landed there during the Punic Wars and stayed eventually turning it into a retirement village for some of Caesar’s legionnaires. Sant Marti was probably the first of the old villages of the province of Gerona to receive the make-over treatment, with Pals close behind. These tend now to be tourist traps and coach party destinations, but nevertheless worth a visit. However, inland the Costa Brava is absolutely crammed with amazing historic villages, some totally unspoilt. 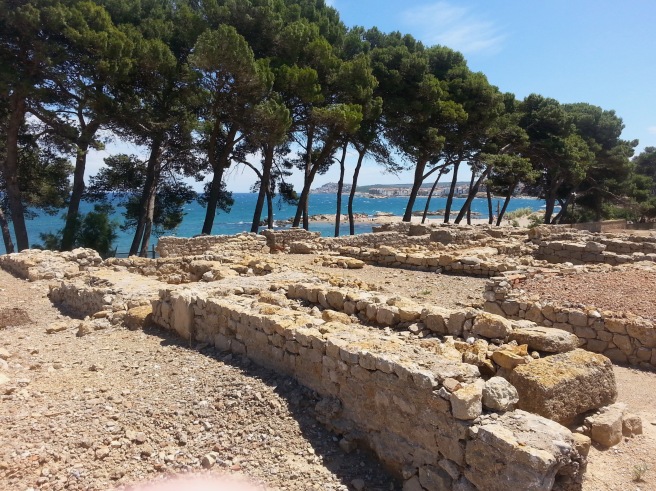 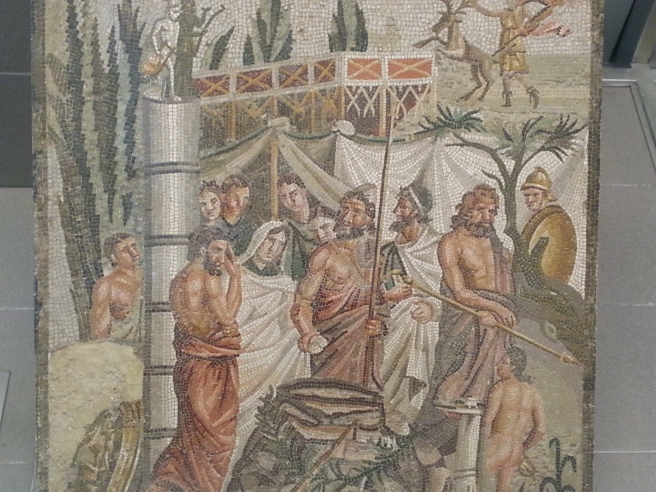