After dropping off Katherine, Nasar and Aiisha at Exeter airport for their flight home today Saturday, with all their accoutrements including Nasar’s lovely new leather holdall, we left the car at the Park and Ride and travelled into Exeter on top of the double decker. Exeter’s suburbs are ok…we passed neat mainly Edwardian houses. First stop, lunch at JLP’s roof restaurant where the weather was so nice that we sat outside – brilliant! Next, to Waterstone’s which was opposite JLP. Unlike the Truro branch, This seemed to emphasise its books rather than ‘non-books’. Since I chose a couple of good non-fiction titles, F. felt obliged to choose two fiction. We had a nice chat with the guy behind the counter who was pleased that our 2 bookshops are still doing well and told us that one of their best categories of customer now is teenage, the group we had always found so difficult. Good news. We then wandered along Exeter’s main shopping street stopping to admire the umbrella ‘installation’…and the upside of some of the buildings

before dipping into  a back street where we examined some old almshouses..preserved after destruction in the Second World War.. 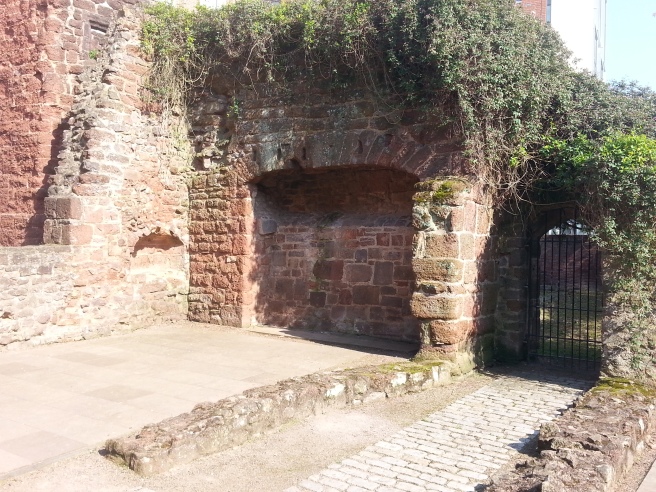 then onto Cathedral Close

where we admired the many old buildings of different ages…….

including the doorway of Number 11 which used to be the residence of the Archdeacon of Barnstable, a medieval house modified during the seventeenth century….. 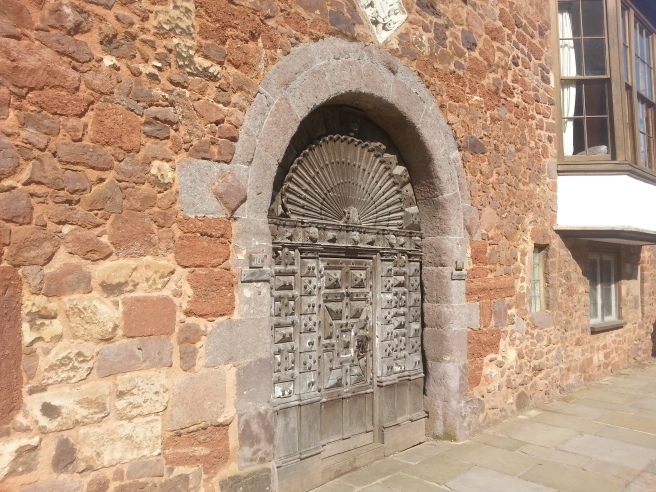 We then decided to explore the city walls which we had glimpsed on past visits, but reading that around 72 per cent of the circuit still survives, we were keen to compare with York where we used to live….what we found was quite remarkable…. 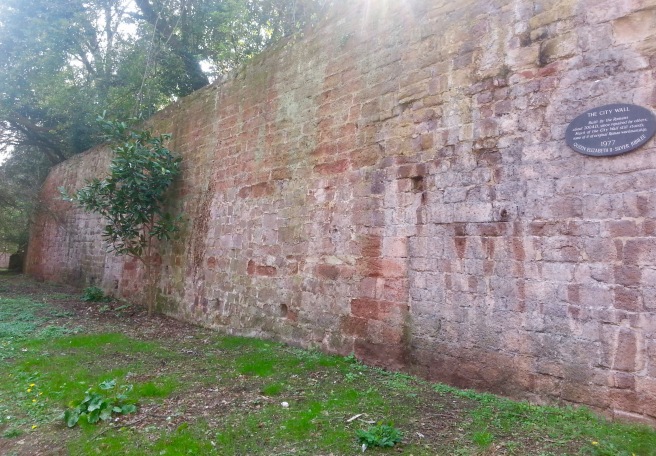 the more we walked the more astonished we were that so much has survived, and a lot of it Roman (generally the purple stones in the fabric, as opposed to the soft red sandstone which was used to repair it in later ages)….. 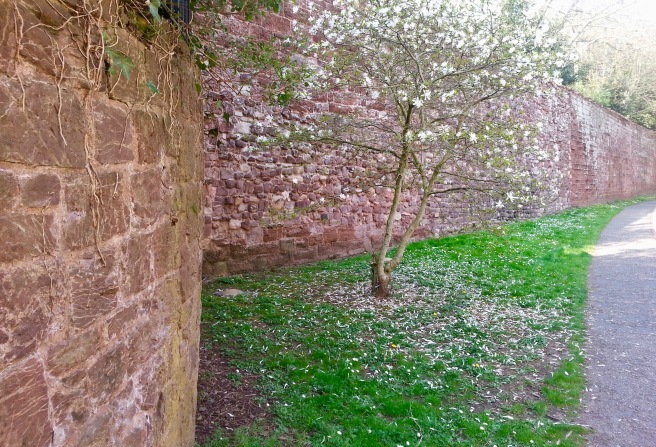 For a terrific write-up on the walls (and many other things) see Wolfpaw’s blog         Whilst walking we came across a nice little group of houses….colour has an important role to play in architecture as our friend Alan pointed out…

As we were getting rather warm on this glorious day we decided to call in to the Prospect Inn on the Quayside for a quick pint…much enjoyed!

However, it would be nice to have some Roman/Medieval wall as your garden wall!

Which reminds me we very nearly bought a house at one time at Cawood in Yorkshire which had a piece of Cawood Castle at the bottom of the garden. Cardinal Wolsey lived there for a while and he is believed to be the inspiration for Humpty Dumpty. A great day out. We like Exeter a lot.