We were off for another week’s house-hunting in Cheshire, having narrowed our search down to Sandbach and district and, rather than belt up the Motorway, we decided to use the ‘old’ route up through the border country. What a terrific decision. So pleasant driving through the rural and idyllic counties of  Monmouth, Hereford and Shropshire then into Cheshire. And always an impressive start to a journey to cross into Wales via either of the Severn bridges….

We broke the journey for lunch at All Saints in Hereford. It was a wonderful find. The cafe is incorporated in the fabric of the church in such a way that it greatly adds to the atmosphere and the every day use of the church itself. It is so well done and the food is unusually delicious. More city centre churches should do this as well as this one does, and reap the benefits.

Suitably refreshed, we took the opportunity to look round the church itself (another bonus to the church of having the cafe) and it was fascinating. Basically it is      Fourteenth Century. 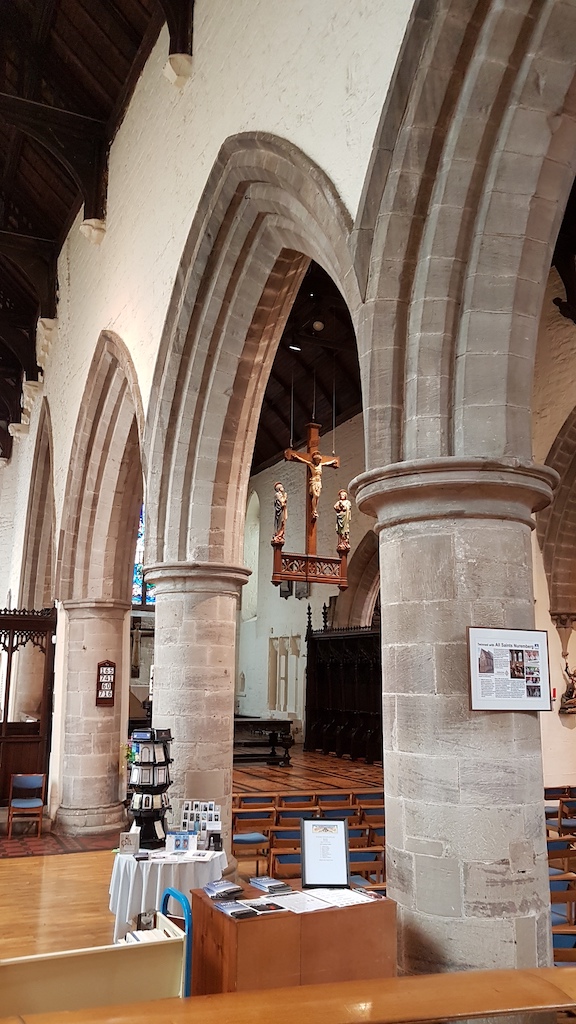 There are some wonderful misericords…. 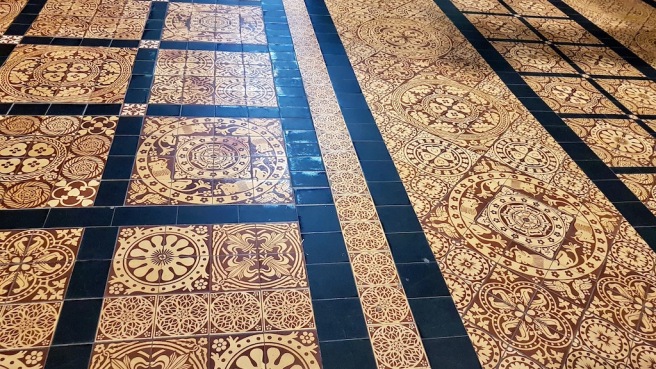 and a famous, indeed infamous, rude carving in the roof….. 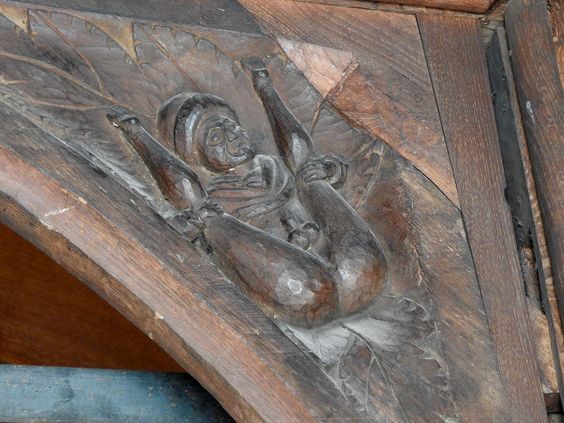 ….apparently the current vicar wanted to make some money out of this by publishing postcards etc but he was stopped by the PCC who ruled it out as too inappropriate! 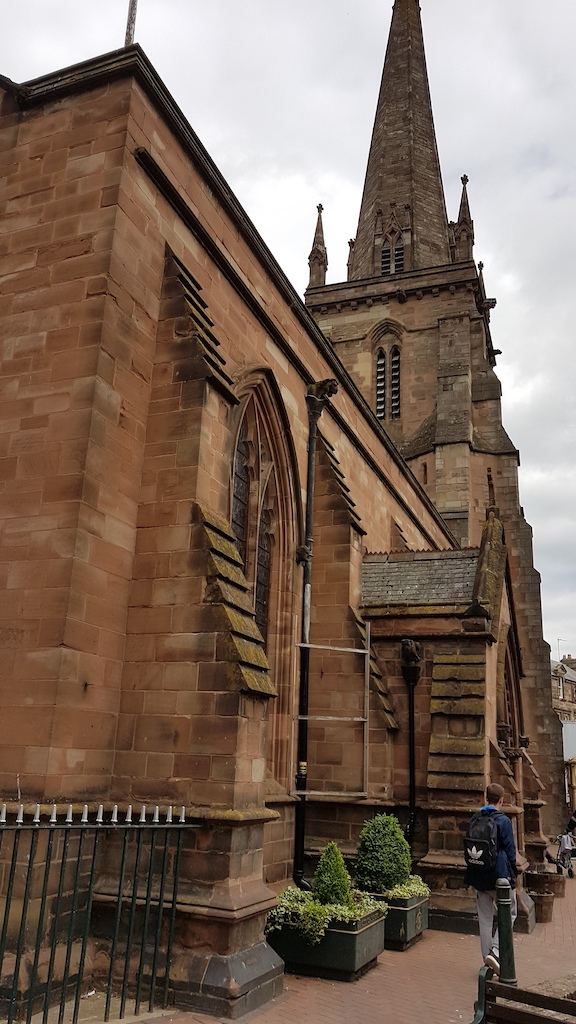 Our little tour of the church over, we wandered around the town itself to admire many wonderful buildings…..

…we noted how bucolic the city really was….not many city centres after all have offices for a cattle society….

we said hello to Elgar on the cathedral green….. 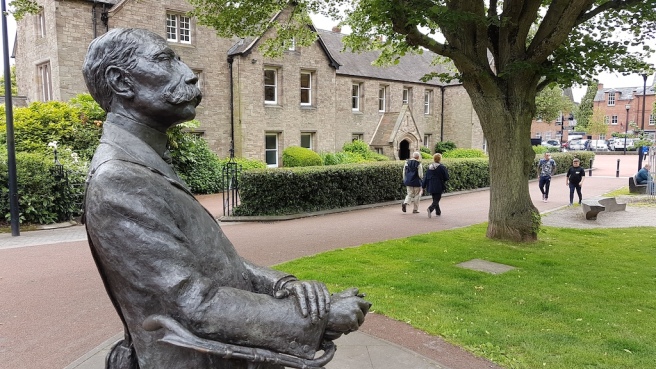 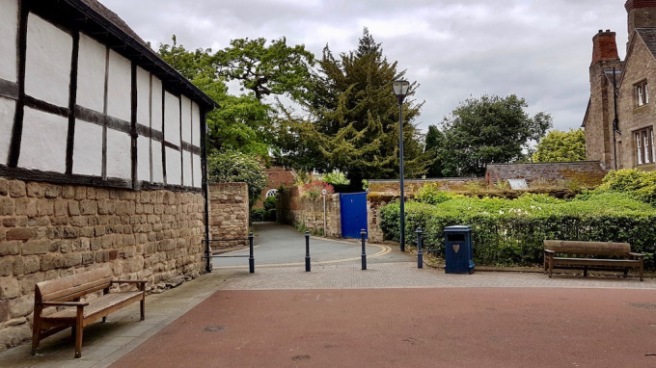 and marvelled at the exterior of one of our great cathedrals…..

Resuming, we eventually reached our destination – Holly Cottage near Holmes Chapel, and settled in to farmyard life!

The cottage was everything you would want and we had our own little garden..

After some serious hard work house-hunting the next two days, for F’s birthday on the 19th we went in the evening to ‘The Lost and Found’ in Knutsford. We travelled by train from Holmes Chapel calling at many little stations on the way – every small village in this part of Cheshire seems to have its own station. Remarkable.

The restaurant was full of character and we really enjoyed ourselves. 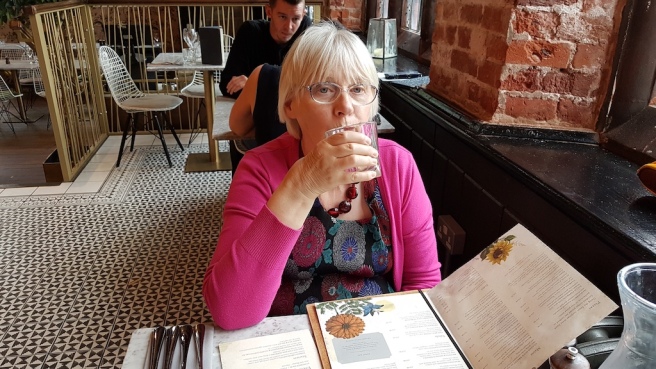 On a ‘day off’ we again used the train to go to Liverpool  – somewhere I haven’t been for a long time. As soon as you come out of Lime Street station you are confronted with the most marvellous array of public buildings among them St George’s Hall, the Walker Art Gallery, various museums and the Central Library, all worthy of a capital city. Indeed we both had the feeling that we were in somewhere much akin to Barcelona or Lisbon.  Who knew that Liverpool was as impressive as this? We were taken aback.

Opposite was the Empire Theatre where I once, with my first girlfriend,  saw Ken Dodd perform. The show started at 7.30 pm, and by midnight Ken was informing us that the doors were locked and we wouldn’t get out until he had finished! The Empire has the largest two-tier auditorium in Britain and can seat 2,348 people.

A lovely park set off all the buildings around here.

As we progressed through the city towards the sea the buildings remained impressive. 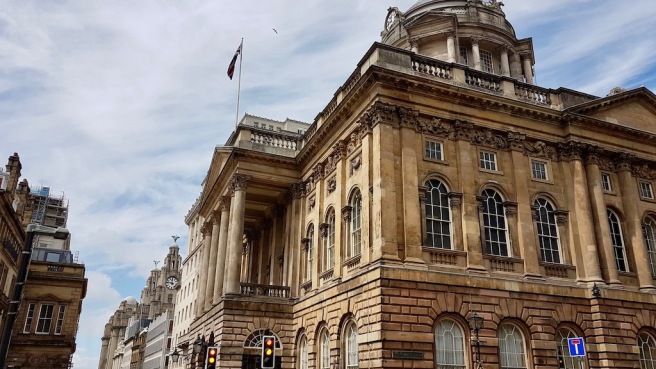 And the front of the city facing the sea was busy and stylish…..full of museums which unfortunately we had no time to see….

We walked from the pierhead towards the Albert Dock and along the way noted the last sailing ship to operate commercially out of the port, astonishingly working the Irish route until the 1950’s. 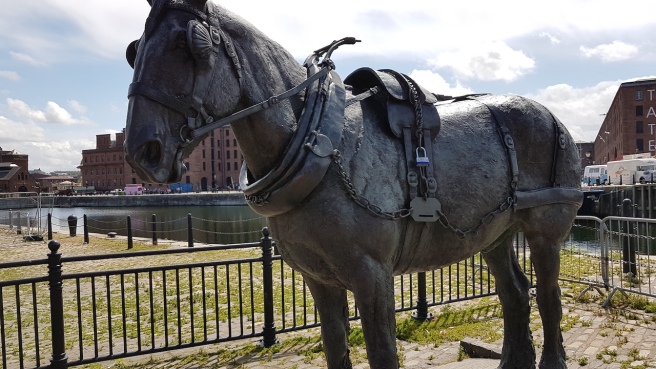 The Albert Dock itself was lovely, a great conversion, full of people. The flats looked stylish but the shops and restaurants were leaning a wee bit towards tat and greasy food unfortunately. But that didn’t take away from the splendour of the buildings and setting. 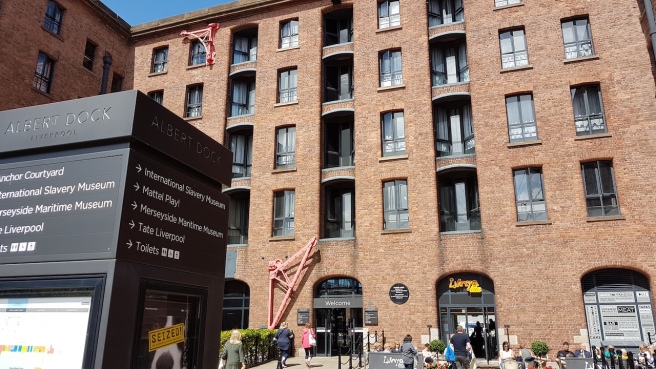 We moved into town to seek somewhere to eat… 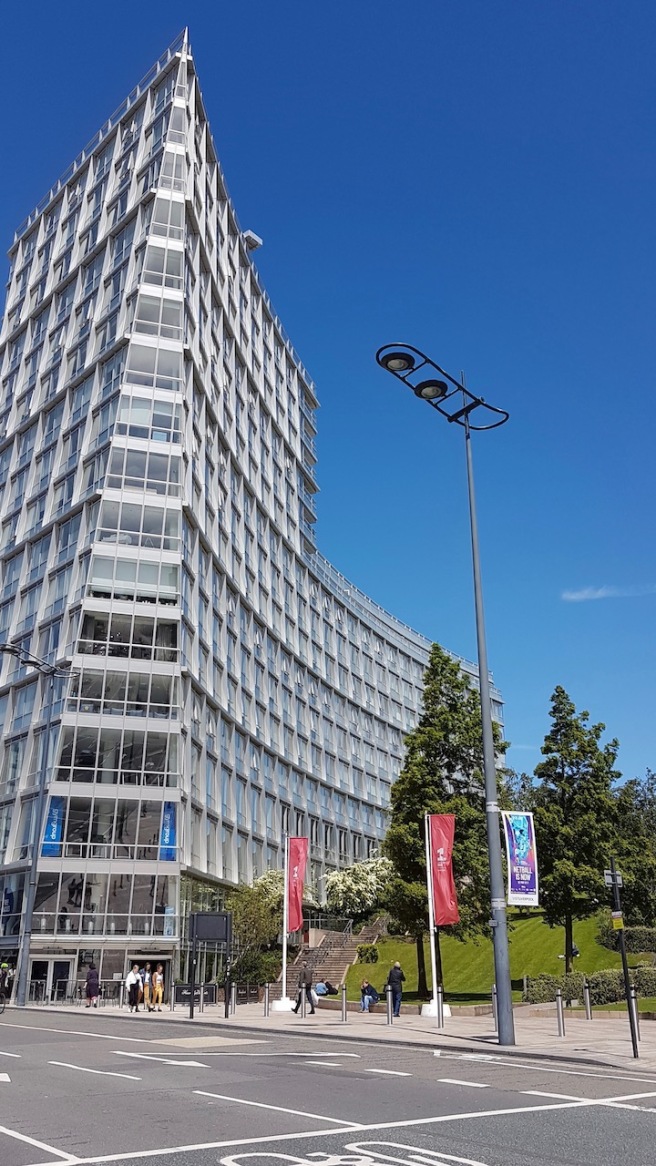 and because we couldn’t find my carefully researched rooftop cafe with a view, we ended up in the shopping centre and a rather conventional lunch at John Lewis’s….not to be sniffed at with a glass of wine. The shopping centre was great too…… very clean, modern and sleek and there was a nice ‘grassed’ area for lunch and watching buskers…all in all a memorable visit to a city that has recovered all its old vim and vigour and self-esteem. I almost like it better than the greatest city of them all (Manchester).

Another of our trips out was to Tatton Park…..National Trust, although even as members we had to pay a £7 parking charge which seems a bit steep. Still all money goes to a good cause I suppose.

Just as when last time we had visited Lymm Hall it was really notable how friendly, helpful and knowledgeable all the guides were. It makes a visit so much more rewarding. But then, as we all know, everybody is friendly in the north west! the entrance hall is rather splendid….. 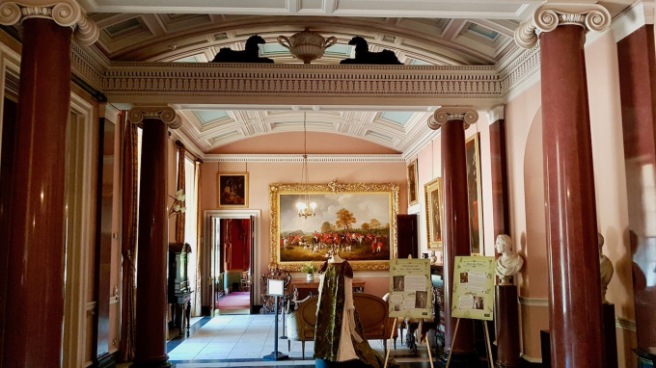 and the spectacular painting ‘The Cheshire Hunt 1839’ almost dominating the hall shows three generations of the Egertons who owned Tatton.

The music and drawing room is the most ostentatious room in the house; Tatton’s collection of Gillow furniture is unrivalled. Wilbraham Egerton’s ownership (1777–1853) saw the commission of many pieces especially for the house.

Views from many of the rooms were of the 50 acres of gardens and series of lakes for which Tatton is well-known. they descend all the way down to Knutsford town centre. Lewis William Wyatt and Joseph Paxton, architect of Crystal Palace, designed various elements. 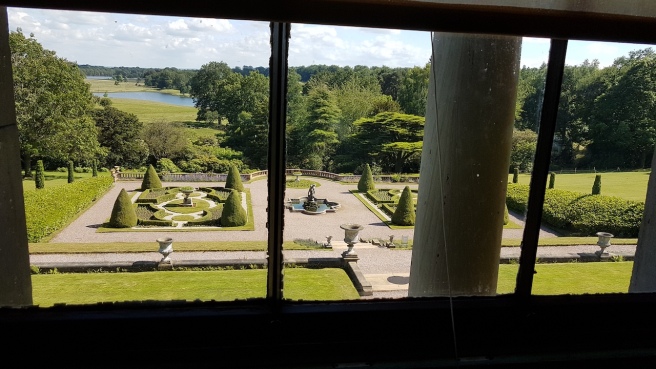 The Library is a perfectly symmetrical room, in keeping with the formality of the neo-classical style. It houses one of the largest and most important library collections owned by the National Trust with over 8,000 books in this room alone, many still in their original covers and in mint condition. We had a fascinating conversation with the guide in this room who is very knowledgeable about the books and gives one of their 10 minute talks on the library. We will be sure to go. 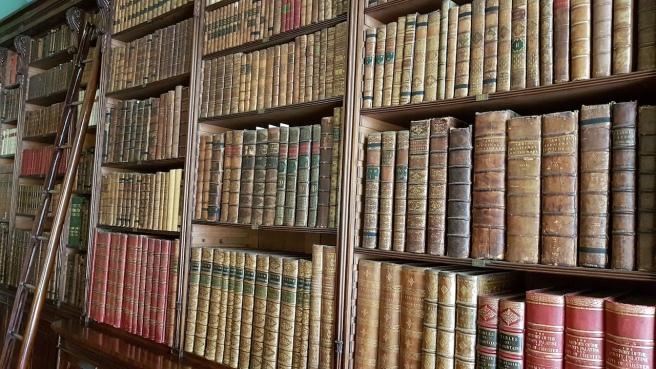 No-one can resist a portrait of any of the Tudors….. 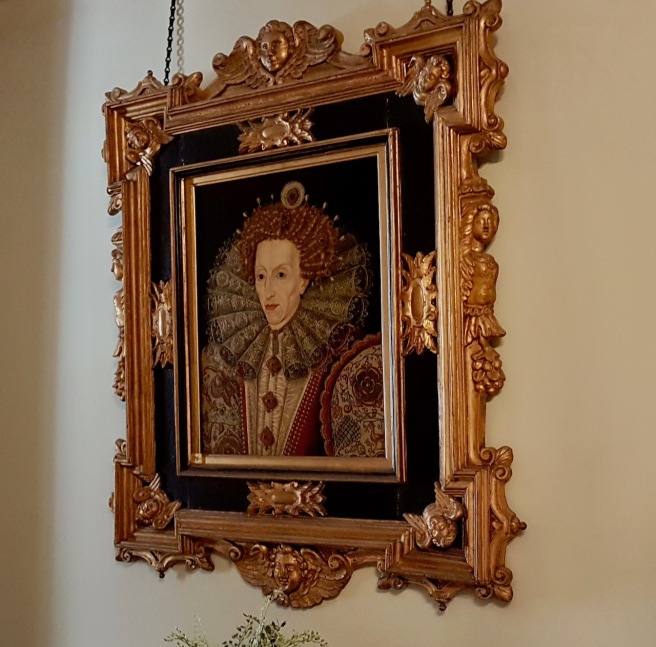 All in all time very well spent. We then were able to drive through the grounds past the lakes into Knutsford where we had another wander around this delightful town. 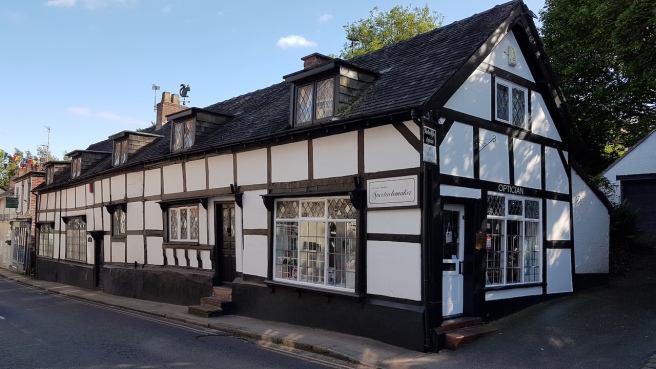 Parts of Knutsford seem very Italianate….you could almost be on the side of Lake Garda. They are nearly all the work of Richard Harding Watt (1842-1913) who was a local philanthropist, traveller and idealist with a passion for building, who made his fortune from glove making in Manchester. He worked with four professional architects to transform the townscape of Knutsford with a series of eccentric buildings. 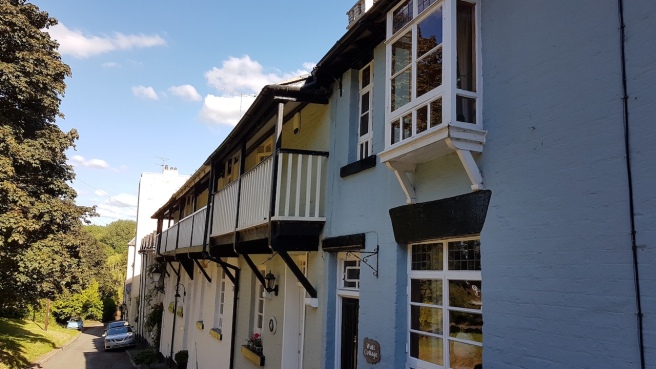 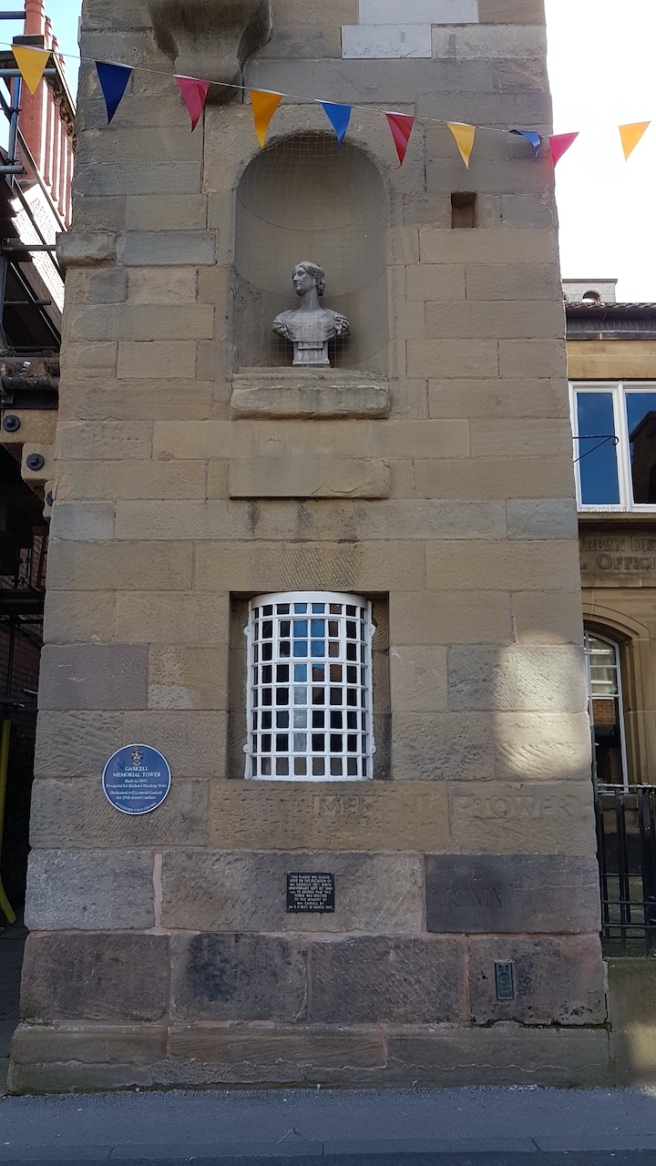 We also strolled along the side of Knutsford’s own lake…how pleasant! 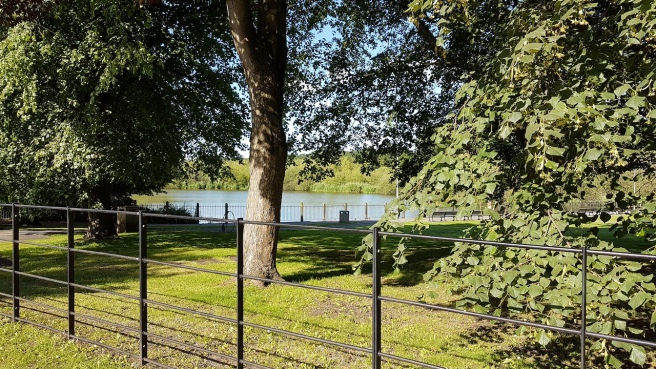 One day we looked again at Tarporley a wonderful small village/town. nice to live here but a bit too expensive for us….. 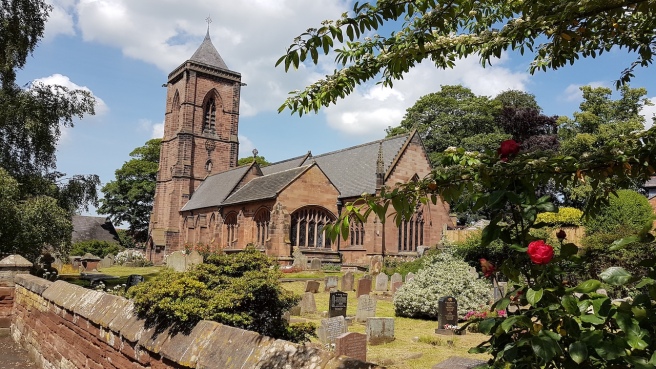 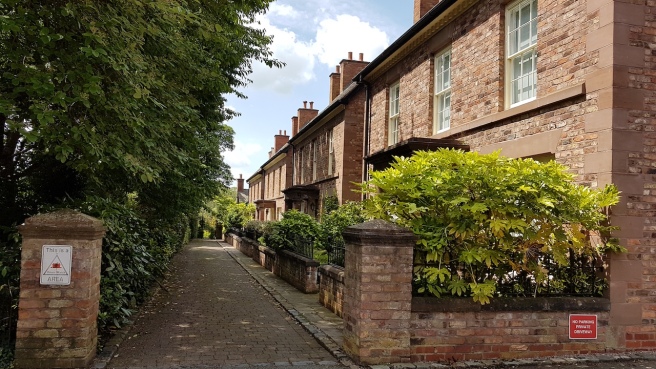 Sunday lunch was at the Bells of Lower Peover. yet another fantastic Cheshire pub….there are many.

Whilst there we had a good look at St Oswalds and a little stroll around the lanes…. 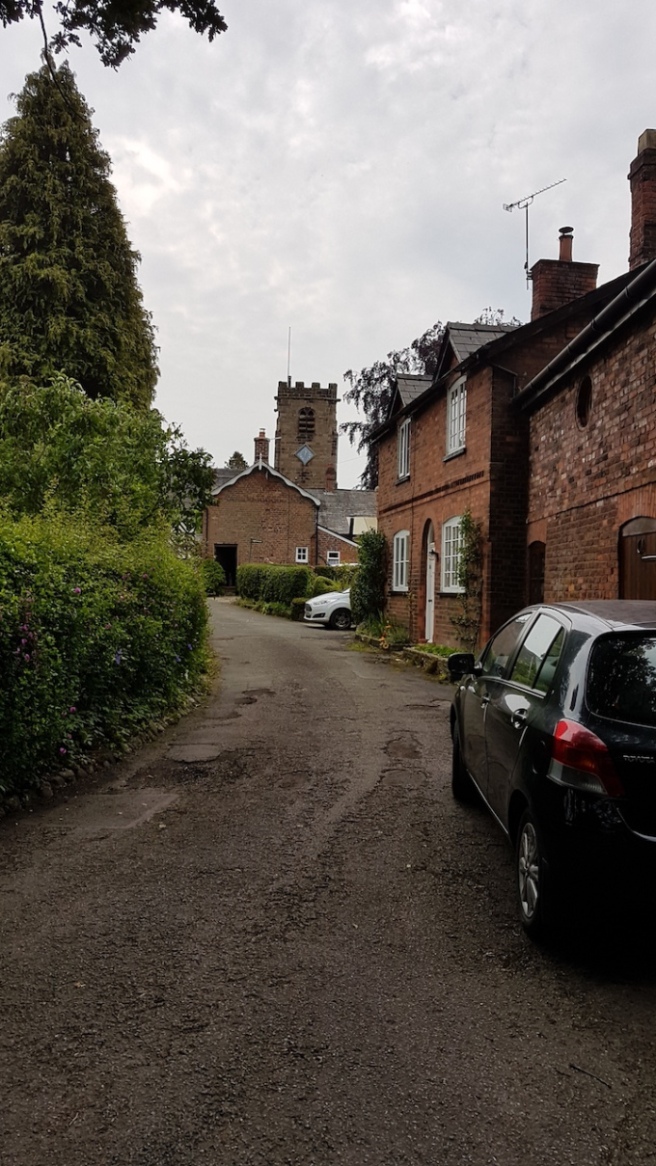 Driving on to Rostherene we were greeted by the vicar in the church and had a very interesting half hour conversation with him. Amusingly on the way out we bumped into presumably his wife who asked ‘Well, did you learn a lot?!’ with eyebrow raised! 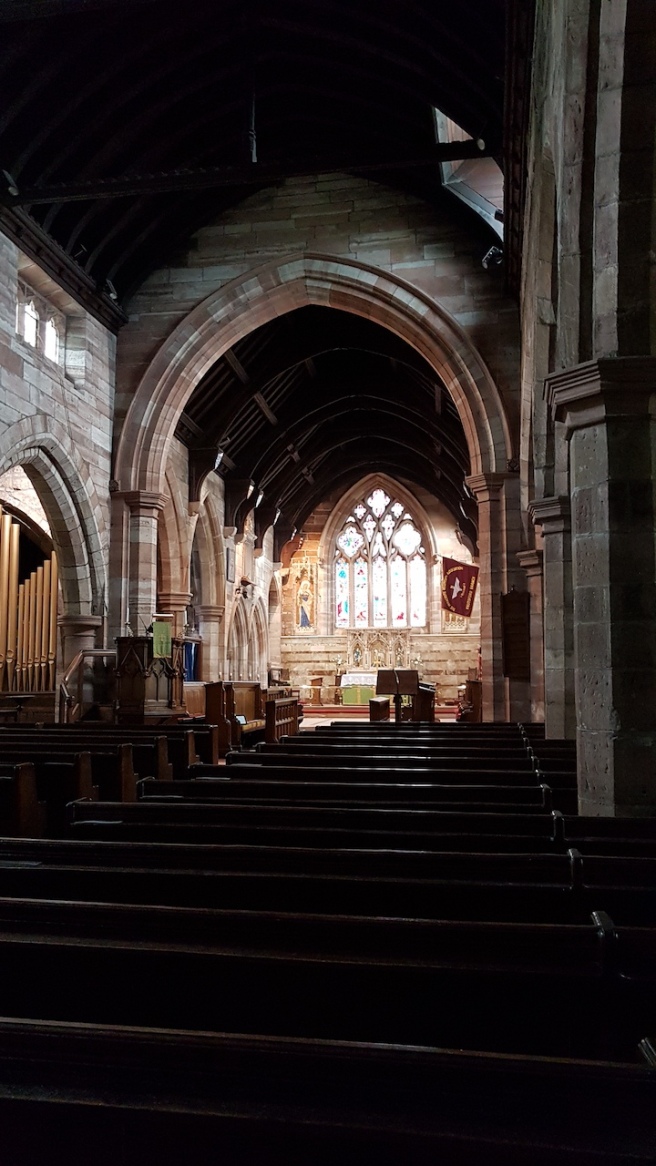 The view from the back of the churchyard to where the vicar directed us was lovely…..the deepest and largest mere in Cheshire. We had a great 10 minutes admiring the scene.

Unusual to see a gravestone we would more expect to see where we live near the sea…..

A good week both for house-hunting and enjoying Cheshire. We decided to return home the ‘old’ way again.  On our way a delightful village green… 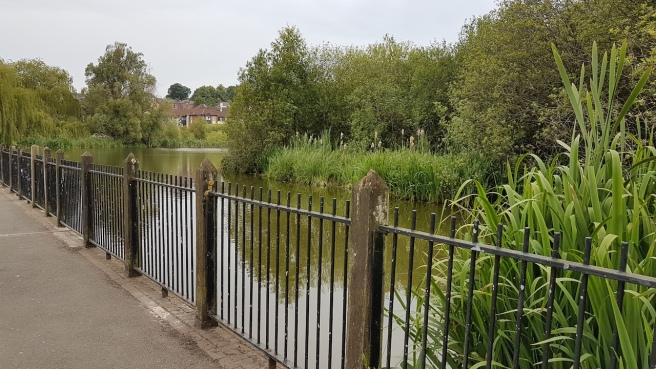 and I couldn’t resist stopping to take a pic of the roadside verge. How much better it is when less cutting of verges takes place…. 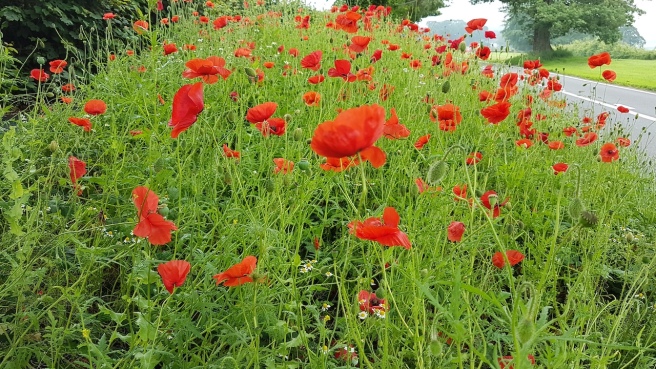 This time before exiting Cheshire we called in to one of the prettiest villages in Cheshire in the deep south of the county – Malpas. 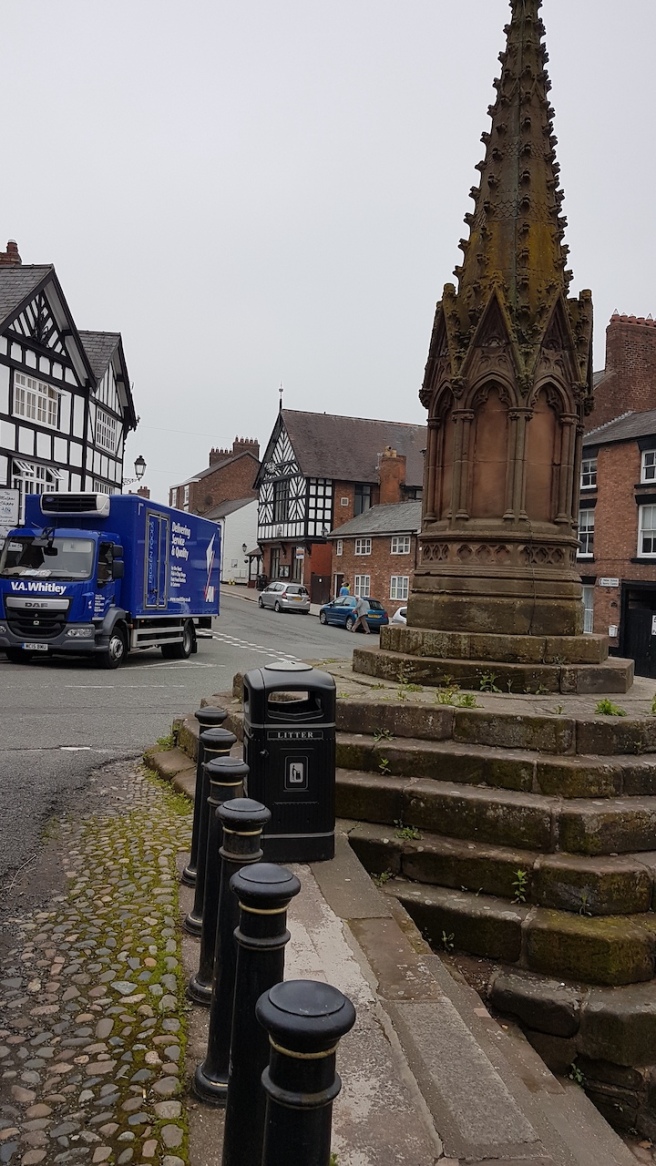 In its centre and at its highest point stood the magnificent church of St Oswalds. 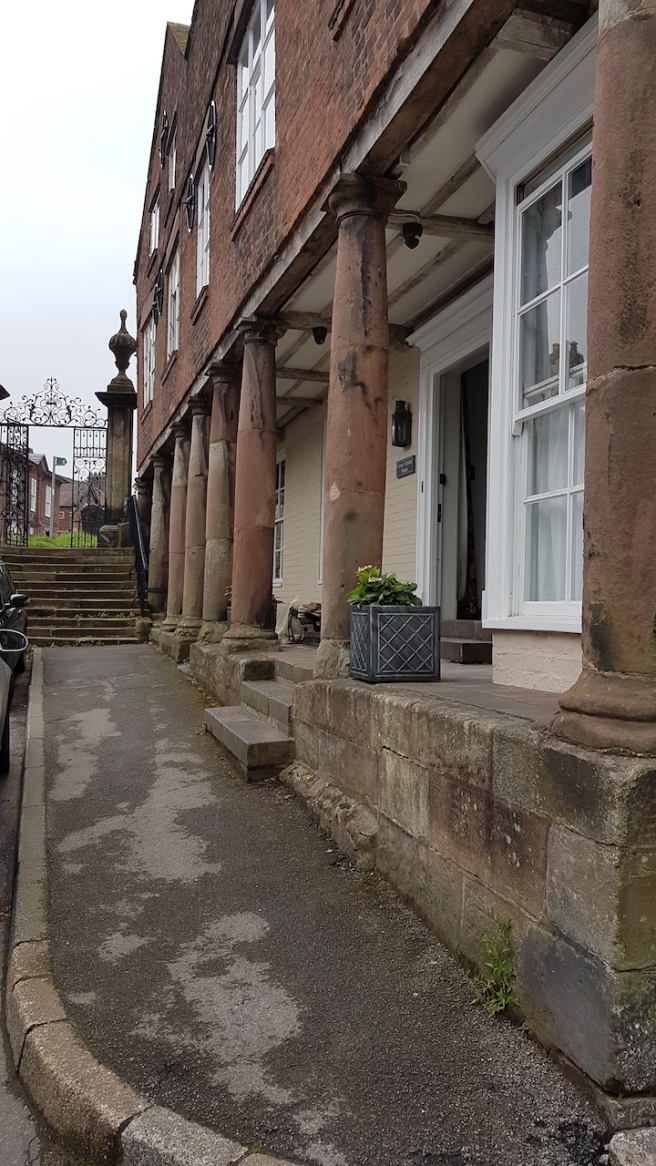 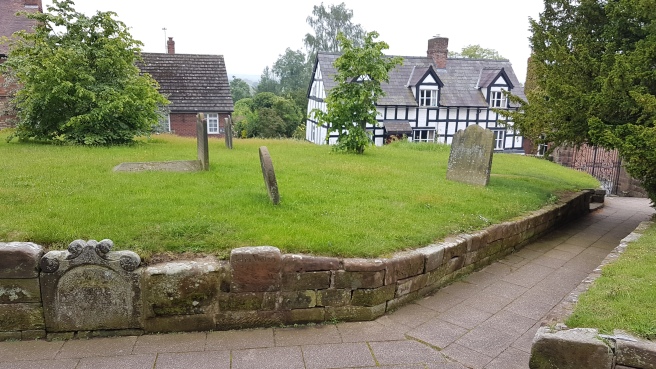 Inside there are many treasures. This oak chest dates from the second half of the 13th century.

The roof is quite exceptional being a fine late C15 camber-beam affair with ornate bosses and angels (restored but none the worse for that) on the corbels. 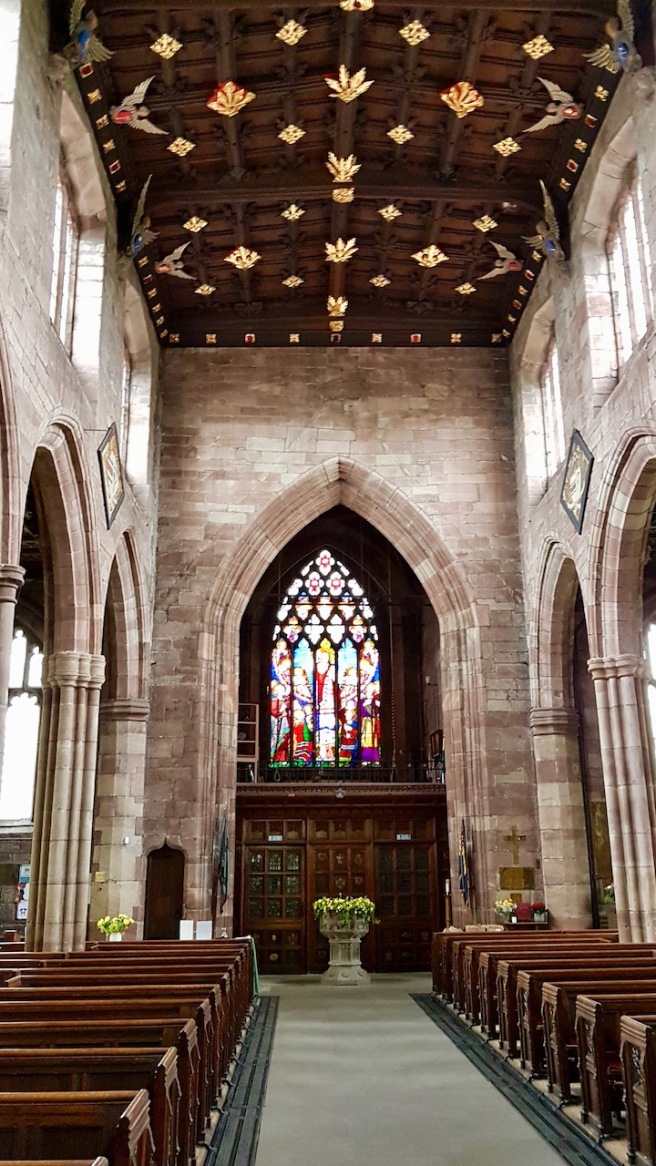 In the Brereton chapel the tomb is that of Sir Randal Brereton and his wife, and is dated 1522. The monument in the Cholmondeley chapel was erected in 1605 and represents Sir Hugh Cholmondeley and his second wife, Mary.

The usual little children and followers carved around the tomb itself are cute…. 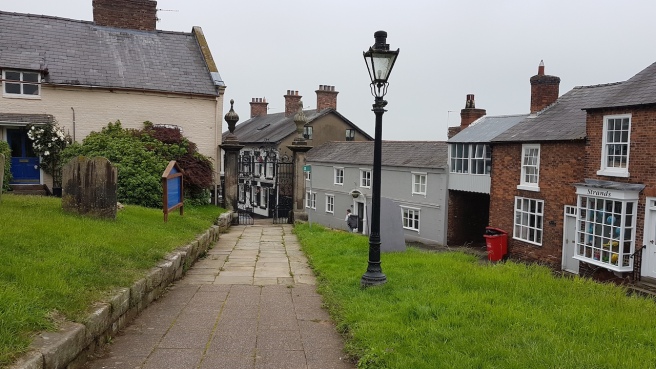 Lunch stop this time was in Church Stretton which I hadn’t visited since a sixth-form History trip in the sixties. Spreading over its hillside site it made a good last stop.